Since my wife bought me the original iRig a few years ago I have been a huge fan of stuff from IK Multimedia, currently absolutely loving the iRig Keys Pro. Now they are heading in a different direction as IK Multimedia announces iRing at CES 2014. iRing is the first motion-tracking controller for iOS music apps and offers unprecedented control. 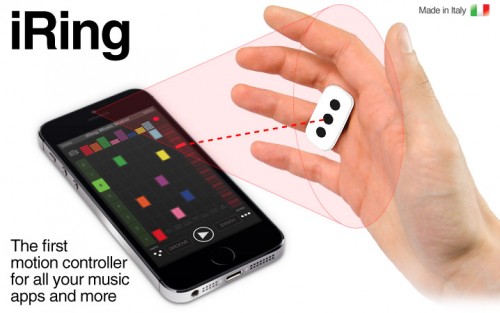 Here is what they say:
iRing utilizes a wearable ring with identifiable markers, the mobile device’s front-facing camera, and advanced computer vision with highly-optimized recognition algorithms built into an app, to determine the precise positioning of the ring markers, tracking their movements and position on the 3-dimensional space in front of the device. This system provides a low-cost solution and a motion-tracking device that is accurate and affordable to anyone.

The iRing controller is a lightweight, double-sided ring that the user wears between two fingers, comfortable enough to be worn while operating musical instruments or other traditional music controllers. Each ring features a linear dot pattern on one side and a triangular pattern on the other. The device camera picks up the positioning of the ring patterns and the apps convert that information into music commands for dedicated app or MIDI information, which any compatible music app can read. This means that a user can now operate up to six controllable music parameters in their preferred music apps with one or two hands gestures.

iRing is set to be released in the first quarter of 2014 and will sell for $24.99. iRing FX/Controller and iRing Music Maker apps will be available as free downloads from the App Store.

Head to the iRing site for more details!