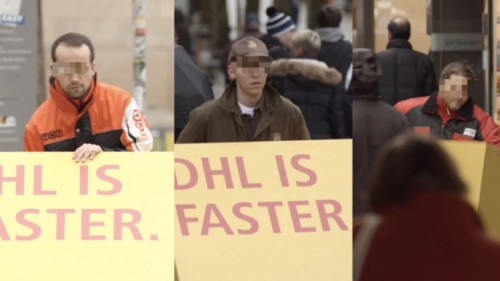 Just because everyone looks at UPS or FedEx as the big boys of shipping, doesn’t mean that DHL has to take it lying down.  To that end, DHL decided to “prank” fellow shippers UPS and TNT by printing “DHL is Faster” on temperature-sensitive paper and glued them to large boxes and had UPS and TNT deliver them to hard-to-reach addresses.

Unfortunately, The Washington Post has debunked the story, explaining that it was created by an ad agency rather than something that DHL actually commissioned themselves.

As you’ll see in the video, below, the packages were supposedly chilled so that the DHL advertising was hidden when being picked up by the shippers.  However, when the packages were brought out into the light and they began to warm up, the words “DHL is Faster” appeared on the boxes that UPS and TNT had to ship.  Check out the video below for a good laugh.  I only wish it were real.