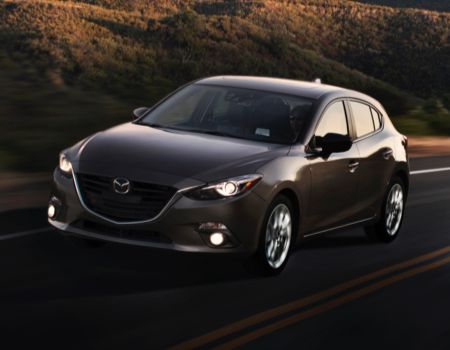 The Mazda3 recently turned 10 years old, and to celebrate the automaker gave the world an all-new, third-generation model. Mazda‘s been a bridesmaid to other Japanese automakers for years, but with new releases like the CX-5, Mazda6 and this little gem, Mazda proves it deserves to be in the same conversations as the likes of Toyota and Honda.

Along with a completely new and out-of-the-box design theme, the 2014 Mazda3 brings a choice of Skyactiv powertrains and a host of state-of-the-art comfort, convenience and safety technologies. 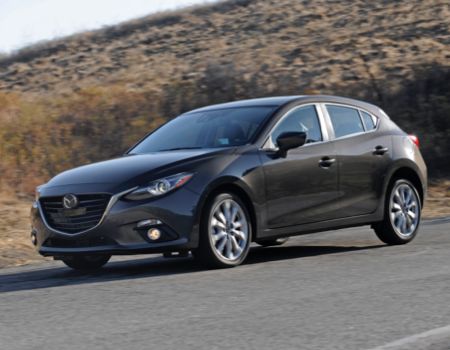 Mazda sent along the 5-door Grand Touring model for our turn behind the wheel, and while I have continuously pledged my affection for Mazda3 since its introduction a little more than a decade ago, I absolutely love this third-gen model. This car is comfortable, quiet, smooth, sporty, fuel-efficient and, in my opinion, one of the best-looking cars on the road today.

Similar to the Mazda6 we reviewed a short while back, the 2014 Mazda3 draws from the automaker’s KODO “Soul of Motion” design language. Its body panels seem to flow like the wind, whether it is zipping around the twisty backroads or sharing quality time with other vehicles in the daily commute. 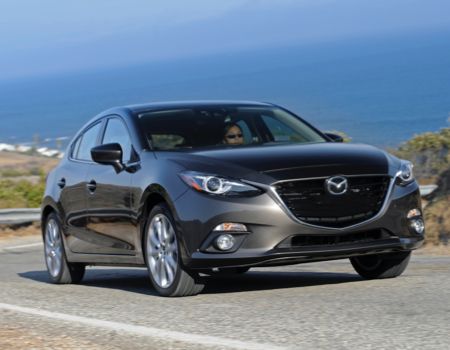 The new Mazda3 shares nothing with its predecessors, meaning it sheds all past association with global Ford-based products, as Mazda is producing vehicles all its own these days. For 2014, the model is offered in sedan and hatchback models that ride on a longer wheelbase than previous year models while overall lengths are slightly shorter. While overall height is also slightly reduced, interior head- and legroom have been enhanced for the third-generation cars and overall weight has also been reduced.

The new design reduces overall coefficient of drag and combined with active grille shutters and i-ELOOP capacitor-based regenerative engine braking system the new car not only slices through the wind better but uses new technology to gain additional fuel economy.

Two engines are offered for the 2014 Mazda3 – a 155hp 2.0-liter or 184hp 2.5-liter inline four-cylinder Skyactiv gasoline powerplants. Each is backed by choice of six-speed manual or automatic gearboxes with our tester featuring the larger engine and Skyactiv-Drive automatic transmission with sport mode. While we enjoyed a nice 28 mpg city and 38 mpg highway fuel economy, this same engine in the larger Mazda6 brought us 40 mpg on the highway. Hmmm. 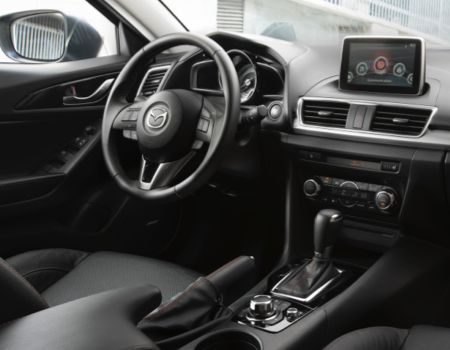 New for the 2014 Mazda3 is Mazda Connect, the automaker’s new HMI (Human Machine Interface) infotainment system that offers head up display along with text-to-voice technology, Bluetooth connectivity and host of in-car apps, and all of this integrated with 7-inch color touch display monitor and SD card-based navigation system. 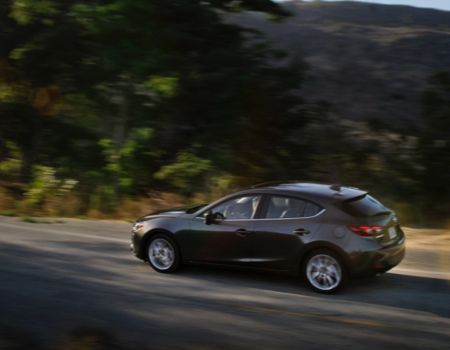 The 2014 Mazda3 is a blast to drive, features great fuel economy, offers a host of amenities and is one of the best-looking cars on the road today. It truly embodies Mazda’s time-honored trademark slogan of being a “Great Little Car.”