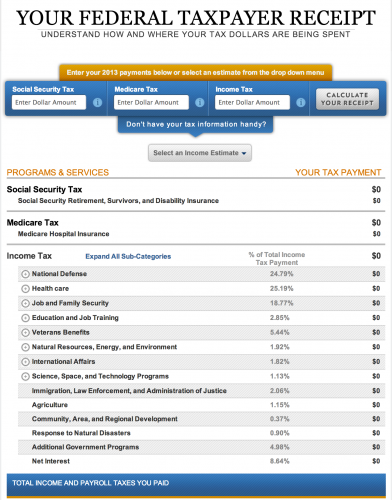 If you live in the US, you know that April 15th is tax day — when tax returns must be filed along with payments for all taxes owed from the previous year. Have you ever stopped to think about where your tax dollars are actually being spent? The White House has released a tool that can show you (in general).

I plugged in some fake numbers, and this was the tax day breakdown (click the pic to enlarge it). 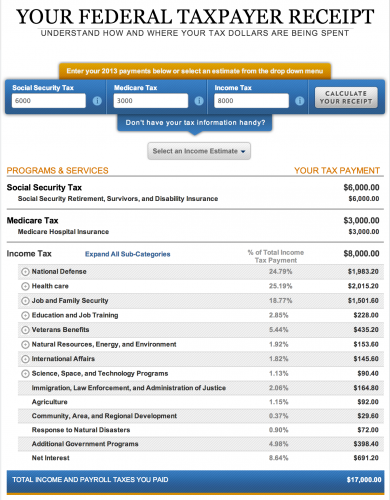 Does it make me feel better to know that if I paid $8K in federal income tax, $1983 of it would have gone to national defense and $2015.20 of it would have gone to health care? Actually, it does; I have to admit being a bit surprised that the numbers weren’t reversed. I find it incredibly depressing that of my (fictional) $8K paid in income tax on tax day, only $90.40 would have gone to Science, Space, & Technology programs. Perhaps most depressing — like all credit card bills with a balance, interest is one of the ugliest expenses — $691.20 (of my fictional $8K). That’s more than is paid to any but the top three categories — national defense, health care, and job & family security.

I don’t mean to start a political discussion; I’d just like you to plug in your numbers and take a look at how YOUR money is being spent this tax day; how does it make you feel? Are you okay with it? Are there places you wish more (or less) of your money was being spent?