Software defined radios are radios that are defined, primarily, with software. What does this mean? That means instead of needing a circuit to do the job, a portion of what the radio normally would do has been replaced by software. Want a different mode or even a frequency? Update the software. This has forever changed how radios are built. 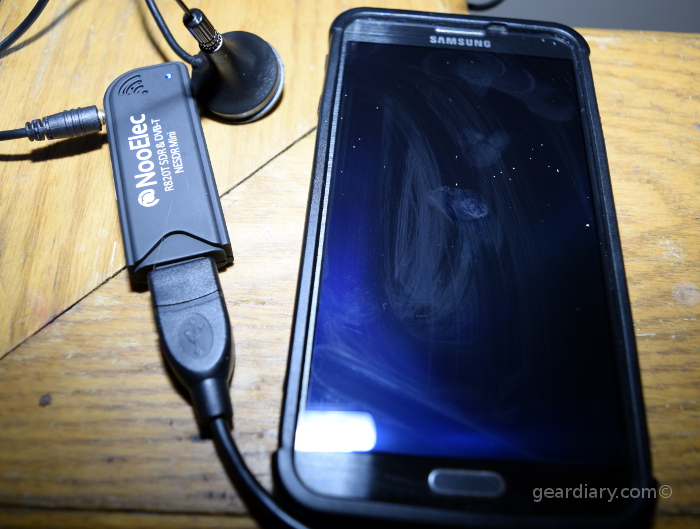 When we were growing up, radios all used discrete components and circuits to do the job a radio normally would do.  For simple AM or Amplitude Modulation radio, you needed a diode and a capacitor in the receiver to demodulate the signal so you could strip the base frequency, or carrier (this is what you tune your radio too) away and are left with the audio.  Audio signals are made by using a microphone.  Microphones convert the sound of our voice and music to an electrical signal which is combined in the transmitter with a carrier so you can transmit the audio.  This is extremely simplified but if you have listened to radio you get the general idea. All of the things that made radio work in those days had to be built. When you wanted to do something different, like tune in a FM station, if your radio wasn’t built to do this then you had to buy a new radio.

Do you want to experience playing with a software defined radio?  You used to have to have a lot of knowledge and money to play with these types of things, but you now can pick up a software defined radio for the low price of 20 dollars. It’s only a receiver, but the NooElec NESDR Mini USB RTL-SDR & ADS-B Receiver Set enables you to do things that used to require thousands of dollars worth of equipment.  Now you just need this dongle and some software and you can listen to a local amateur radio repeater, NOAA Weather Radio, or even pick up data from a passing airliner (more on this later).

The easiest software I have found that works with this dongle are a couple of Android programs, namely SDR Touch, a driver program and for the aircraft stuff, ADSB Reciever. You will also need some way to attach the USB dongle to your phone.  You can do this by purchasing a USB On The Go cable that has a micro USB port on one side and a USB host port on the other.  Also, your phone will have to support USB On The Go. My Galaxy Note 3 and my Nexus 7 both worked fine with this dongle.

Once you have the apps installed, you simply attach the dongle and open the app. Each app is a little different so I will go into each app and what they do. 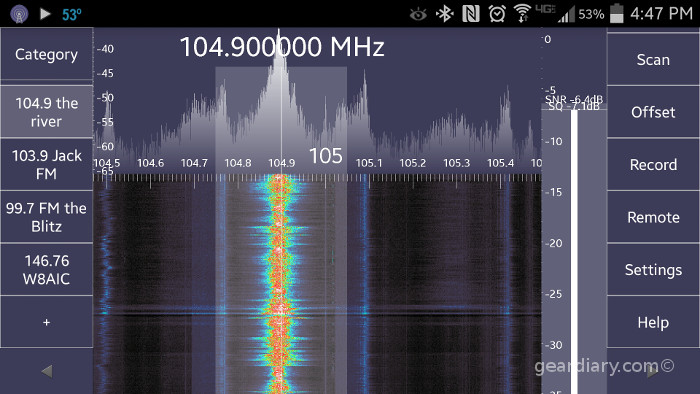 SDR Touch is the simplest of the three apps.  Actually only 2 of the three have an interface. The other app is simply a driver that allows the SDR dongle to function. When you open the app, you just press the power button and you can tune up your favorite frequencies.  One thing to note, with this dongle you can only tune from about 28 MHz to as high as 3 GHz.  To tune in most of the amateur HF band, you will need to purchase the Ham-It-Up Board and the necessary cables to hook it up to the SDR. However, you can already tune in 2 meter and 70 cm Amateur Radio repeaters, The FM Broadcast Band you know and maybe love (I still like it on occasion) and many other services in a receive mode only. This dongle will not work with the systems that law enforcement use.  These are called trunk systems.  However, that doesn’t mean it’s going to stay that way. Since it’s software defined, a developer can write software to make this work in the future. 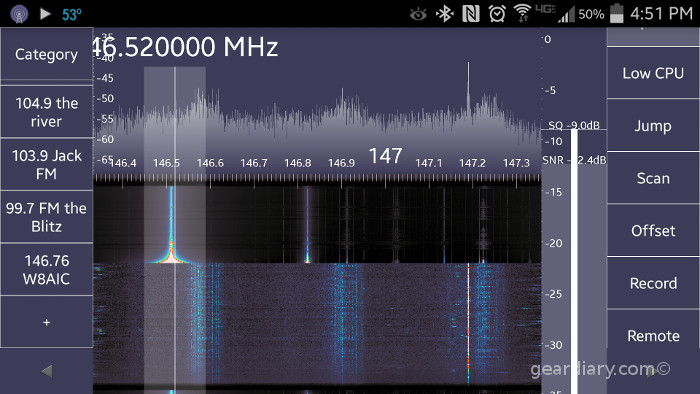 Also important to note, SDR Touch only works for a few minutes.  Enough to test to see if your USB on the go cable and dongle working.  Once this works, you can buy the key that enables longer listening times, recording functions as well as the waveforms and waterfall display.  What are those for?   Those help you tune the radio in and find things if you are tuning unfamiliar frequencies.  It’s, of course, MUCH easier if you have a list of favorites you want to tune in and save. The interface is a little sparse but it is functional and let me tune in several of my favorites.

I will probably be picking up the Ham-it-Up board and an enclosure so I can monitor the ham bands. 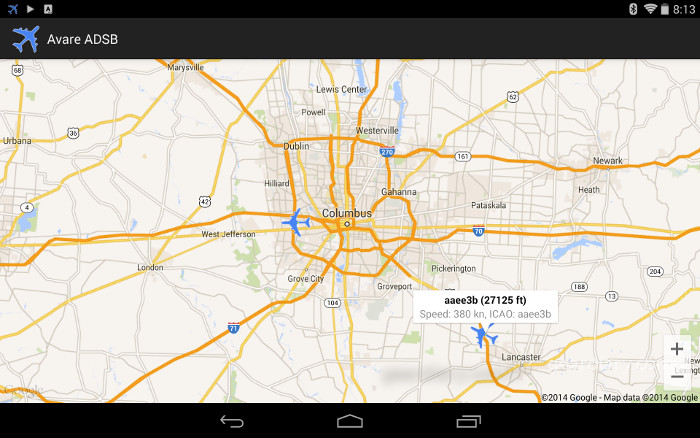 Well, what’s ADSB?  ADSB stands for Automatic Dependent Surveillance-Broadcast.  It’s a system that was developed post 9/11 to help track airliner and general aviation traffic when they are out of range of radar. There’s many things that ADSB can do, but we are primarily interested in what they call the squitter function.  These are, essentially, data packets that contain the plane’s altitude, latitude and longitude and heading.  It also includes their ICAO number.  You can take that number and Google it and find out what kind of plane it is. This could be really fun to watch if you are in a place like New York or Chicago.  In Columbus, we have air traffic but not nearly as much as these bigger areas. Also, I noticed that not every packet has the latitude and longitude on the packets so you won’t be able to see the plane’s location on the map.  However, if it does you can open the map and see where the plane is in relation to your location.

The future of Software Defined Radios is bright, and I fully believe that it will end up being even more useful to hams in the future.  To go a little further with SDR, your next step would be to look at Great Scott Gadgets Hack-RF One. This is a more feature filled SDR and is also capable of transmitting. You can use this as a basis of a ham radio. Note: the HackRF can transmit on bands which you probably don’t have privileges on. PLEASE do not do this, as you could put yourself into significant legal trouble at a minimum and at the maximum, cause death. Yes I mean death. Radio is used for many critical functions in our country and while it is fun to play with a receiver, a transmitter can disrupt things greatly, so PLEASE be careful.

If you are a ham, you can go all in and purchase a HF SDR Radio from Flex-Radio.  These are essentially radios that replace all the knobs, dials and many circuits with a program that runs on your Windows computer.  Flex-Radios aren’t cheap, but they can do everything that a regular, non software defined radio will do and more.  Alinco also makes the DX-SR9T which has a mode that will disable all of its controls and put your computer in control of the radio.

Eventually software defined radios will drive the cost of these radios down.  There is even a project by the Tucson Amateur Packet Radio corporation is putting together to make a software defined radio platform that is open both in hardware and software.  Eventually, all you may need to add frequencies or modes would be to install a software update or program.  Imagine NEVER needing to buy another radio just because your current one doesn’t do something?  That’s something I can get behind!