It  took a little over 3 years, but Apple has introduced an iMessage deregistration tool allowing iPhone users who’ve moved away from iOS the ability to deregister their number from being connected to iMessage within Apple’s servers.  If you’ve gone from iPhone to Android (or any other platform), you might’ve encountered problems continuing to receive text messages from iPhone friends. 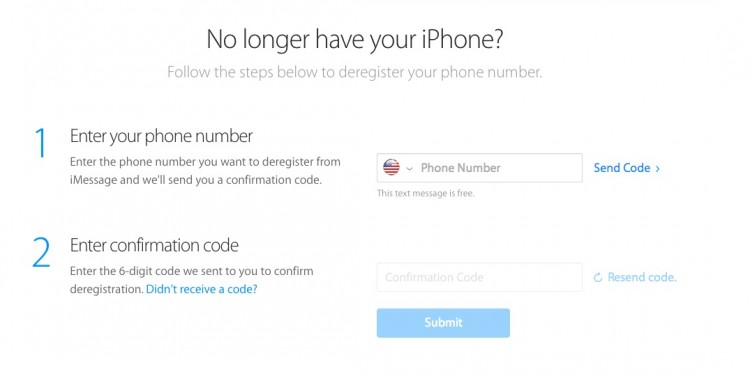 iMessage is controlled behind-the-scenes by Apple who route SMS and MMS messages between iPhone users through their proprietary iMessage platform. There is quite a lot of benefit to this – mainly increased message size (no limit vs SMS limit of 140 characters), ability to send messages via WiFi, seamless integration of SMS between non-iPhone users and iPhone users, delivery receipts and the ability to send iMessage from iPhones and iPads.

Since iMessage was introduced in October 2011, there has been an issue when an iPhone user transferred their number to a non-iPhone platform such as Android or Windows Phone. In some cases, if the iPhone user did not turn off iMessage on every device (including iPad) prior to making the number transfer, their phone number remained locked up inside Apple’s servers as if they still used an iPhone – causing SMS or MMS from iPhone using friends to not be delivered.

Now Apple have quietly introduced a web-based tool which allows anyone in iMessage “limbo” to enter in their phone number and be deregistered from Apple’s iMessage servers. Previously, users could perform essentially the same thing by calling Apple — though there was often a time lag from when the request was made to when the number was removed from iMessage.

If you’re wrestling with missed text messages from iPhone friends — AND you’ve recently changed from iPhone to another smartphone platform – hustle over to Apple’s site and make use of their iMessage deregistration tool.