AT&T subscribers can now  get 15 GB of data on their former 10 GB mobile share plans at no extra cost. This change is not automatic though – you’ll have to login online starting today (November 18, 2014) and make the change on your account. This move matches Verizon’s data tier which also last month offered 15 GB for $100. 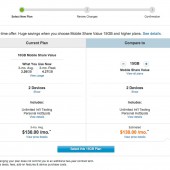 Sharp eyed AT&T subscribers will note that this increased data promotion appeared to be happening unofficially though the ever popular “call AT&T and threaten to cancel then speak to retentions”. Some subscribers in the Fatwallet forum claim they were able to convince AT&T to double their data at no extra cost.  In at least some cases that data doubling at no extra cost happened via a temporary bill credit while this new 10 to 15 GB move is a permanent change for those who elect the new data tier.