BiggiFi is a powerful Android device for your television, with a somewhat silly name. It’s a tiny Android-powered computer within an HDMI stick that’s hooked up directly to your television. You have access to the entire Google Play app library and can run most of its apps using your iPhone or Android phone for control. It retails for $89. 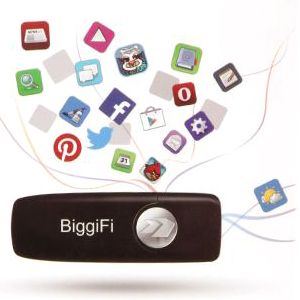 What’s neat about BiggiFi is that they did not try to come up with a half-baked TV friendly interface. Instead, they developed Android and iPhone apps that allow you to control the device using your own mobile phone’s touch screen, and what you see on your TV is basically the same that you’d see while using an Android tablet. While the control does not feel 100% perfect, it’ll do the job as long as you’re not using any apps that are complicated to control. I was able to play Temple Run 2 perfectly using my iPhone’s touch screen and gyroscope functionality. 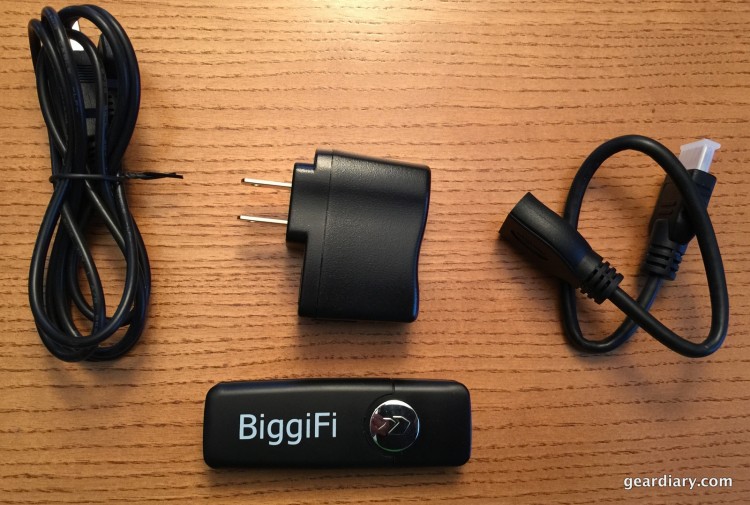 Inside the slightly larger than your thumb HDMI stick lays a dual-core A9 Processor, 1GB of DDR3 memory and 4GB of internal flash storage. Don’t worry about that tiny hard drive, as you can upgrade the storage using a microSD card up to 128GB. BiggiFi runs on Android OS version 4.2 Jelly Bean and can support WiFi connections at 802.1 b/g/n. 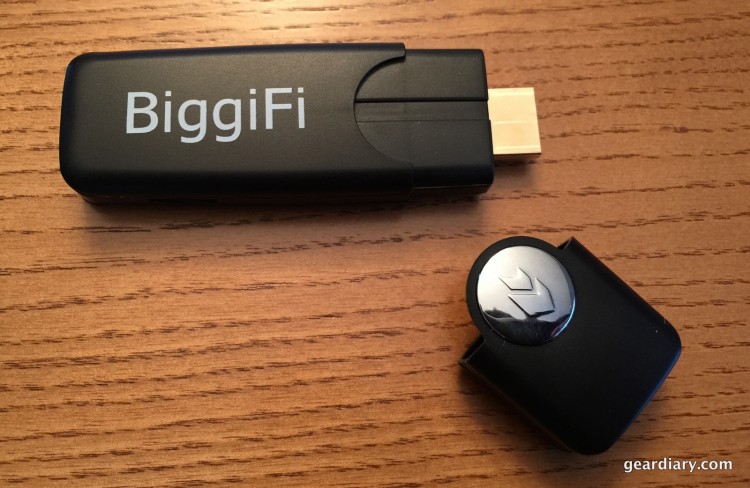 On the outside of the BiggiFi you have a USB 2.0 port, a microSD port for the aforementioned storage enhancement, and a microUSB port that’s used for powering the device. Included inside the package is the BiggiFi itself, the AC adapter for plugging into a wall (if necessary), a microUSB cable, and an HDMI extension cable if there isn’t room behind your TV to plug in the BiggiFi directly. 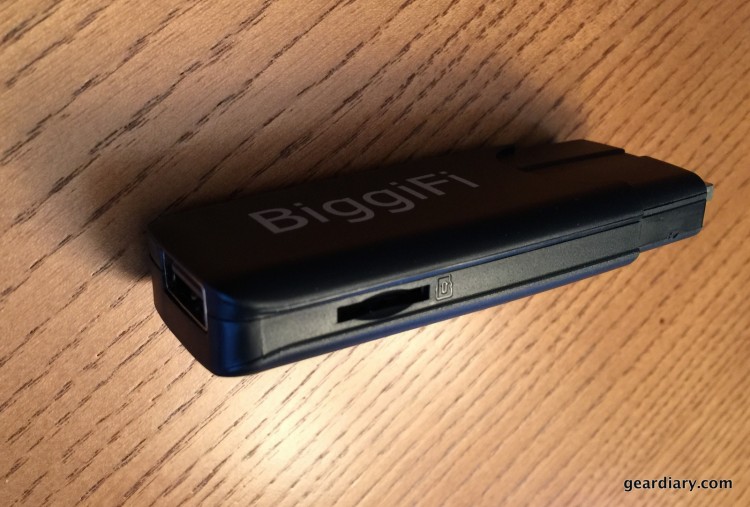 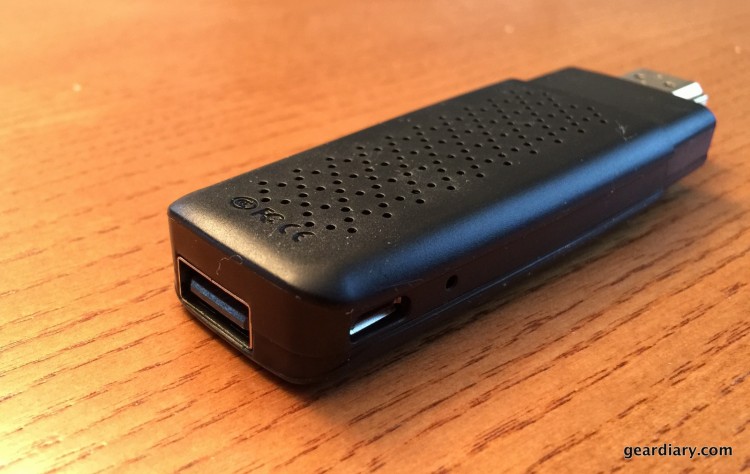 During my testing, I was able to play a few games, streamed some YouTube videos at 1080p, checked my email, and browsed the Internet. I was pleasantly surprised at how quick and responsive the BiggiFi unit performed.  There was a very slight lag while swiping to turn while playing Temple Run 2, but if you play for a while, you’ll definitely get used to it. 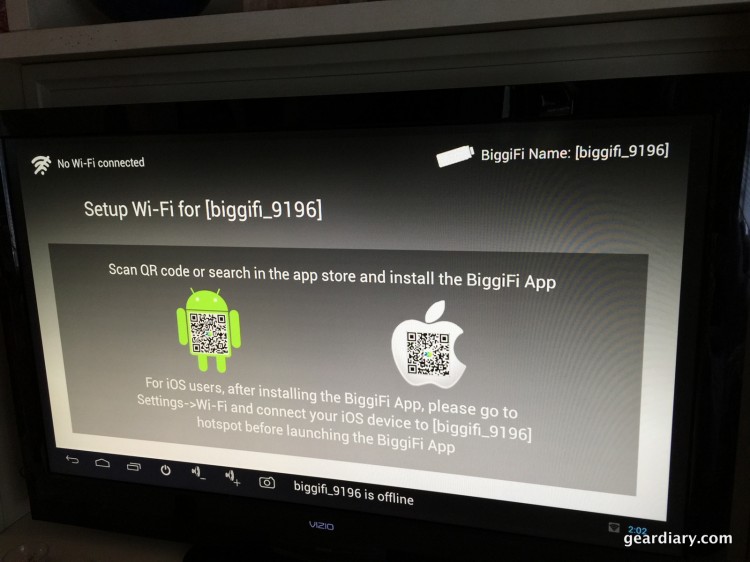 The iPhone app has two input settings, “Touch Mode” and “Mouse Mode.”  Touch mode is basically the same as using a tablet, you tap to choose, drag to scroll, etc. however since your finger isn’t actually on the screen that shows the icons or the app you’re in, it’s easy to lose where your finger actually is on the BiggiFi screen.  In mouse mode, you have a mouse on-screen at all times which makes it easy to keep track of where you’re selecting, but doesn’t feel very tablet-like.  I also didn’t figure out how to scroll while in mouse mode. 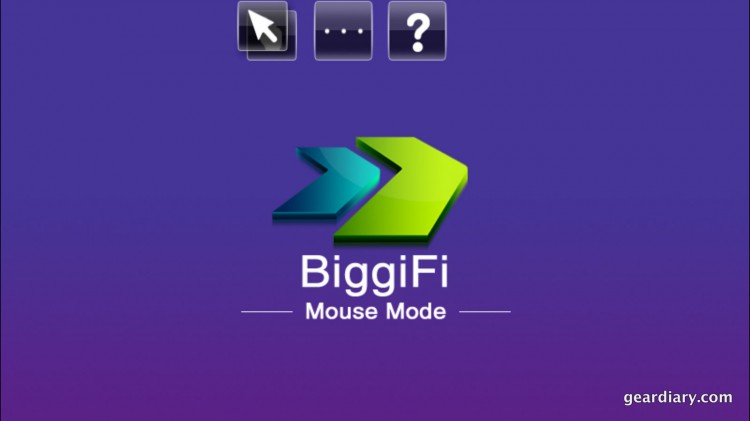 This is what the iPhone app looks like. You drag your finger around the purple part. 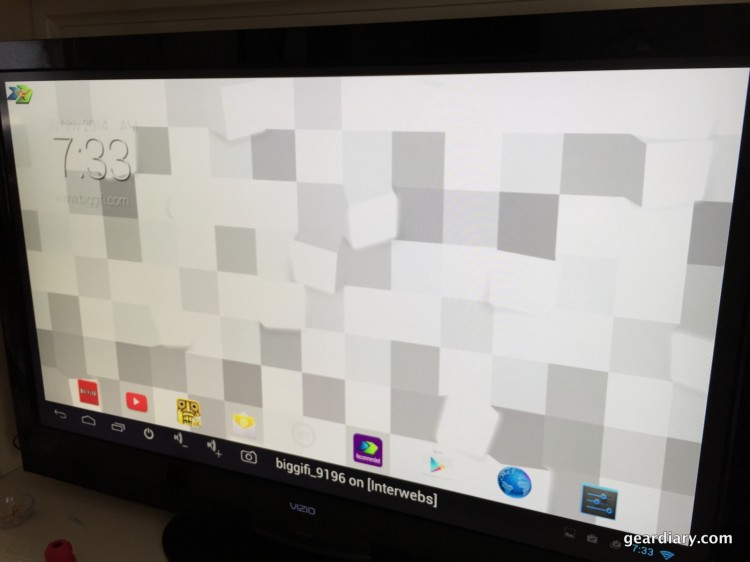 Initially I was not expecting much, having some experience with similar Android devices, but I was seriously impressed with the BiggiFi. If you’re looking for an inexpensive device with which you can play games, stream videos, and more on your TV, you owe it to yourself to try out the BiggiFi. Unlike the lower-priced Google Chromecast, the BiggiFi has a ton of functionality since you have access to the entire Google Play app library. 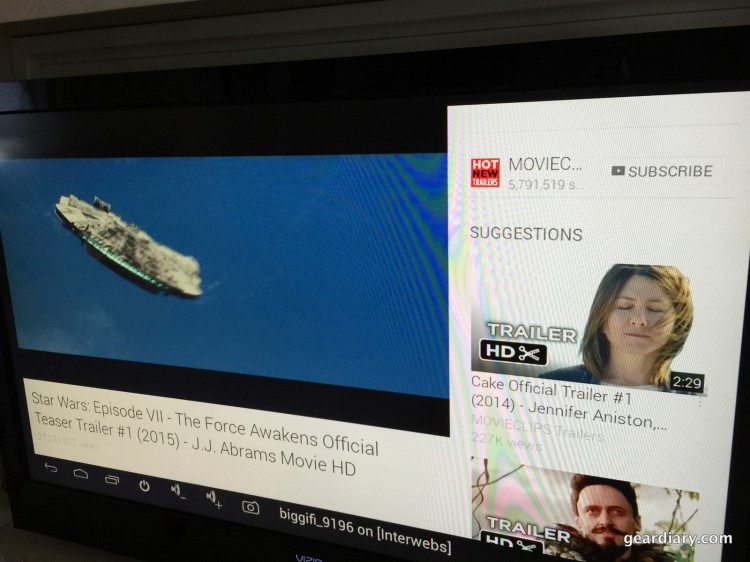 Check out the following promotional video for a quick look at the BiggiFi:

You can purchase the BiggiFi directly from the manufacturer at their website.

Source: The BiggiFi Android-powered HDMI Stick was provided to me as a review sample by the manufacturer.

What I Like:  Easy to install; Easy to use; iPhone App works nicely to connect the device to WiFi; Basically full tablet functionality; Access to the entire Google Play library.

What Needs Improvement:  The control via iPhone touch screen is not yet perfect.