Being a real barbecue enthusiast, I have both a gas grill and a couple of charcoal burners. One of the bummers about cooking with gas it that it’s difficult to add real smoke flavor to the meats you cook. A new product called The Ribalizer aims to help make that a little easier for fans of propane gas grill cooking. 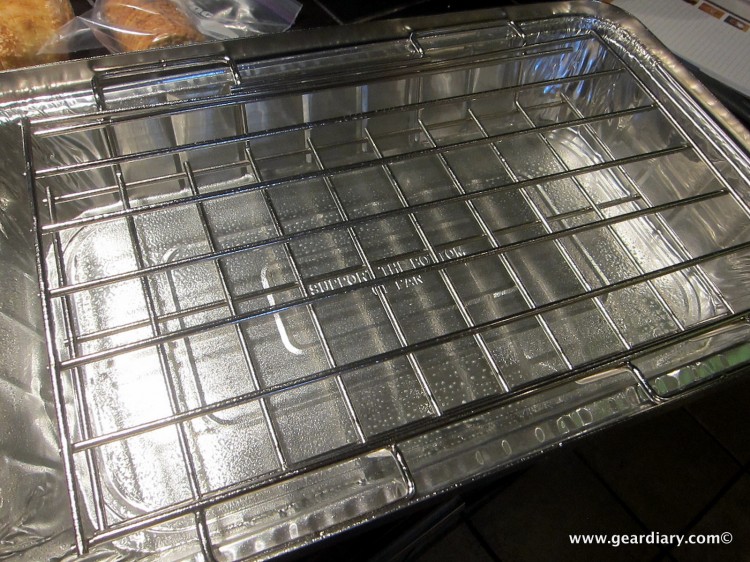 The Ribalizer retails for $29.95, but in truth, you’re paying at least a little bit for the ingenious design over the actual materials included. In the box, you’ll find four disposable pans which are basically roasting pans that you can buy at the grocery store. In fact, after using them, you’ll need to replace them either directly from Ribalizer or from a local store. Also included is a custom-designed rack to hold the pans together on the grill. Lastly, there is a rack which they call the “Ribalizer meat separator.” I’ve bought several rib racks in the past, so there’s nothing proprietary about the equipment. However, the fact that they are all designed to fit together so well makes this a convenient solution. 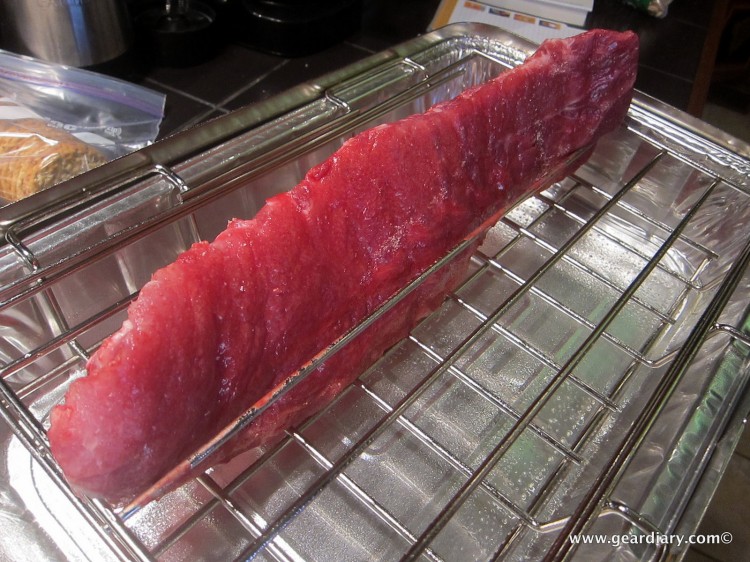 The first step to making ribs on a gas grill is to season your rack or racks with some sort of rub. Ribalizer also sells custom rubs, or you can make or purchase your own. A full rack of baby backs fits between each rung of the rack, and you can cook up to five full racks at a time. 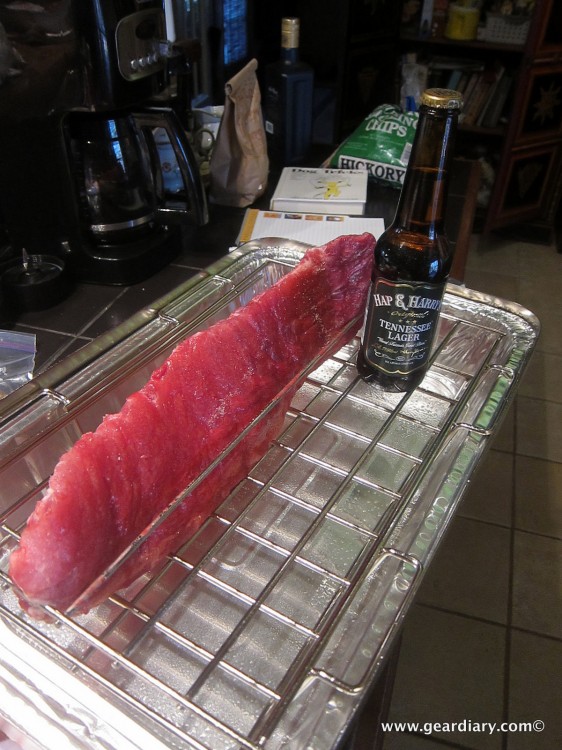 The basic idea behind the Ribalizer is to allow you to apply smoke to the meat during the first part of the cooking process, and then seal the ribs inside a moist environment to tenderize the meat. To help keep your meat from drying out, they encourage you to add some sort of liquid to the bottom pan. I used a beer and the water that I was soaking my hickory chips in. 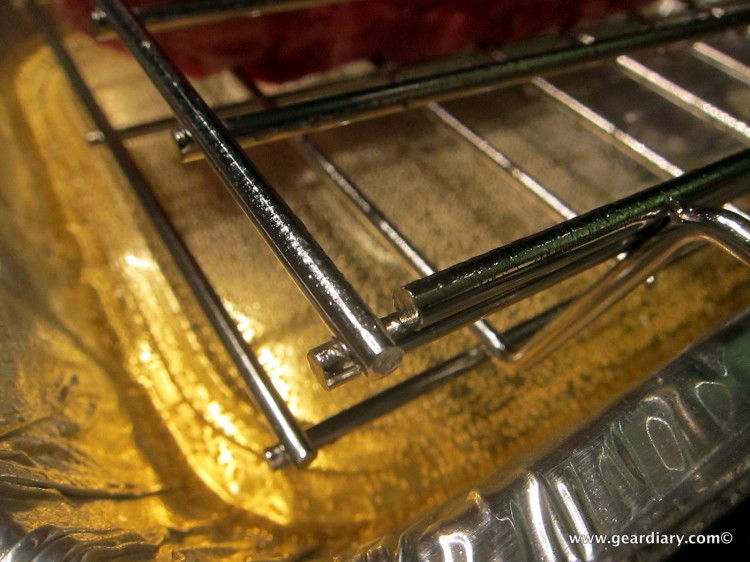 These ribs better be good if I’m gonna waste a beer! 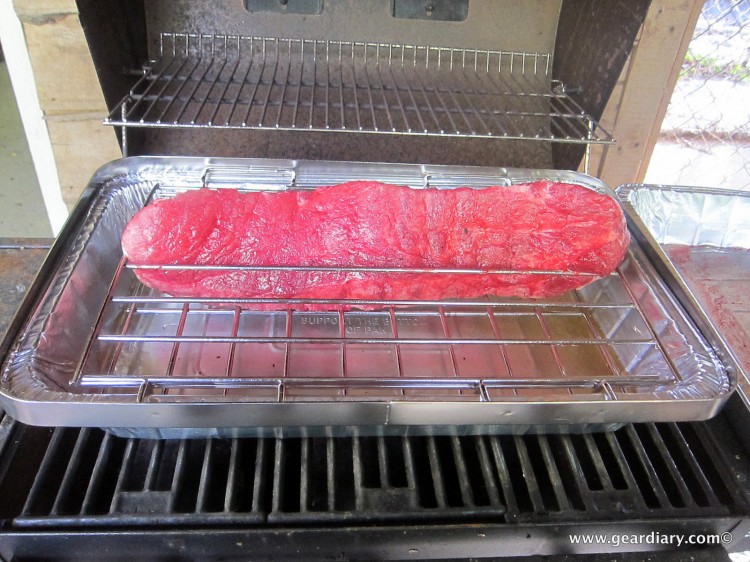 But how do you get the smoke rolling in a gas grill? I had assumed that the Ribalizer would have some way included to help out with this, but it unfortunately did not. You need to use a smoker box or form a pouch out of aluminum foil to keep your water-soaked wood chips in a low oxygen environment so that the heat of the burning gas will cause the chips to smolder instead of burn.

So I assembled the Ribalizer and filled up the smoke box with chips and carried it out to my medium-sized gas grill. Uh oh, it didn’t fit. This would have been a problem if I didn’t already own a Primo charcoal grill to quickly fire up and switch up my cooking.

The makers of the Ribalizer do not recommend using a charcoal grill with their product because it is critical to be able to maintain a constant temperature without flare ups during the cooking process. Fortunately, my Primo is a ceramic kamado-style cooker, so it holds a rock solid temp once I get the vents set correctly.

In fact, the Ribalizer’s instructions warn about a lot of things. Since the aluminum pans are not reinforced, they admonish users not to try to carry their ribs in the pan lest it collapse under the weight. I didn’t have any problem, but then again I only cooked one rack. If you loaded it down with a full complement of ribs, you would definitely need a stronger pan to carry them to and from your kitchen. 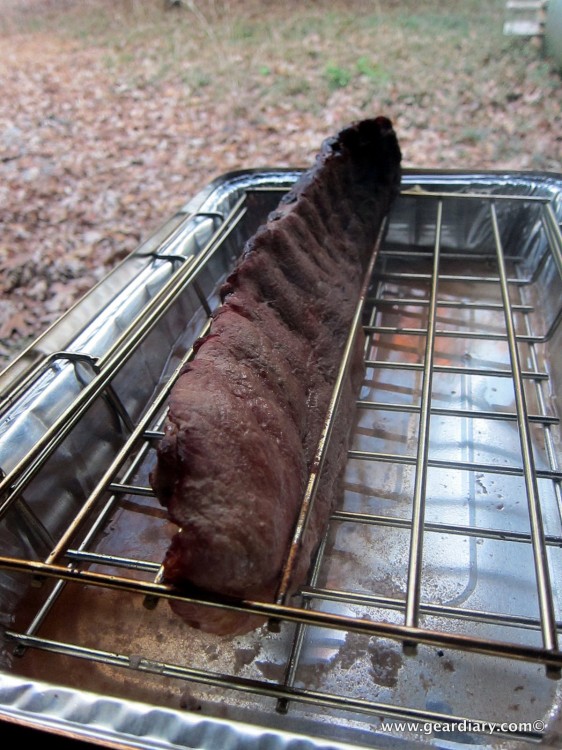 After 45 minutes of smoking without the top tray installed, the ribs have probably taken on about as much smoked flavor as they will accept. After the outer surface of the meat begins to cook, it just doesn’t accept much from the smoke anyway. 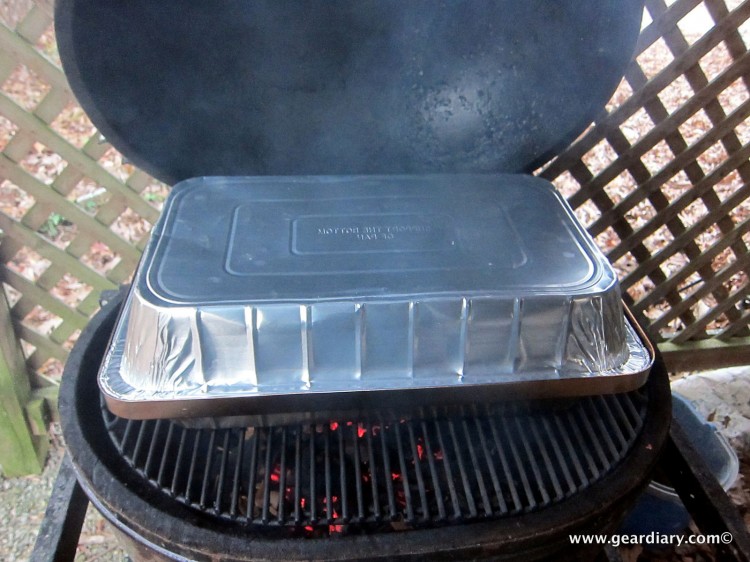 So at that point, it’s time to tenderize the ribs and finish them up. Using oven gloves because the entire contraption is hot (another good warning), install the top tray as a cover to the Ribalizer. You might want to top off the liquid in the bottom tray to keep the humidity level up. Cook your ribs over medium heat (225-250 degrees) for another hour and a quarter, and your ribs should be almost done. This is generally much quicker than the time I’ve spent cooking ribs without a Ribalizer, so that’s another plus. 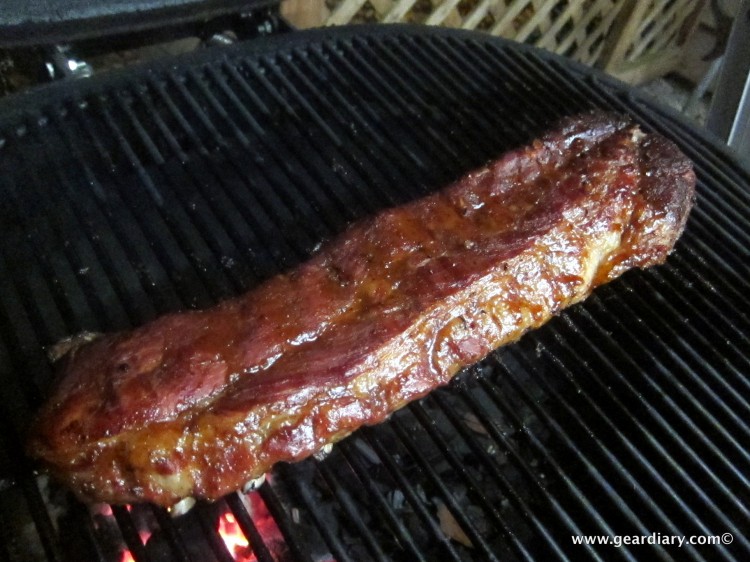 I went the extra step of painting a little bit of barbecue sauce on the ribs and give them an extra fifteen minutes directly on the grill to cook the sauce on the rack. At the end, I did have some nice mahogany-colored ribs that were quite tender. I was impressed that they took on a good amount of smoke, but I did cook them over charcoal, so that probably helped a little too.

In the end, would I buy another Ribalizer? Probably not for myself, because it really didn’t fit on my grill. If you have a larger gas grill with at least three burners, and are in a situation like an apartment complex that doesn’t allow charcoal grills, then this might be a good tool for you. There is a popular method for cooking ribs that involves wrapping the rack in aluminum foil for a portion of the cooking time that basically mimics the effects of the Ribalizer. But if you’re cooking multiple racks at once, I think the Ribalizer would be more convenient.

Ribs are great. Ribs cooked over wood or charcoal are better. But if that’s not your style, the Ribalizer might be a new addition to your smoking arsenal.

What I Liked: Clever design to provide a moist cooking environment leading to tender, delicious ribs.

What Needs Improvement: Perhaps a smaller size version would be more useful for many users. An included smoker box would allow gas grill users to cook right out of the box.