For the past month I’ve been reviewing the future. As it turns out, the future is cheap, reliable, and nearly indestructible. It’s not terribly flashy, but it gets the job done. The future is a Motorola E on Republic Wireless, a prepaid carrier using WiFi calling to lower the monthly cost. 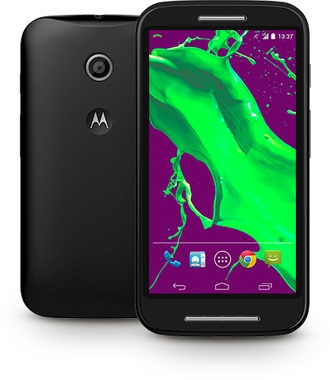 Before you check me for a head injury, I don’t think a low-end Android phone on a small prepaid carrier is our future. It’s the future from 15 years ago. In 2000, PDAs ruled the roost. If you wanted a color device that played games and handled your basic organizing needs, your best bet was a Visor Prism or a Palm IIIc (both $449). Now you can buy a Motorola E for an MSRP of $99, with a bigger, better screen, WiFi, Bluetooth — an entire world in your pocket — all for less than what was then a cutting edge device. In fact, if you traveled back in time and told someone buying a Palm IIIc what the future held, they’d probably think you were nuts. Not for predicting that kind of future, but for predicting that kind of future would be so affordable. 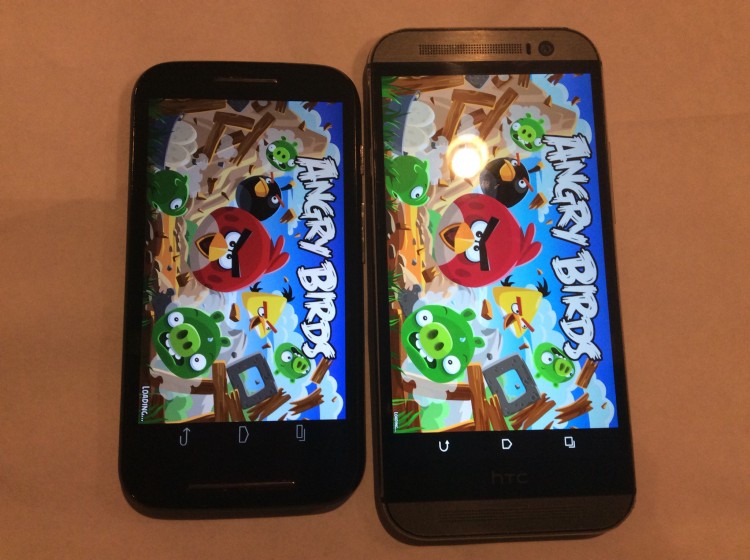 That’s the context through which you need to view the Motorola E. It’s not a great phone per se. For a few more dollars you can pick up the slightly better Motorola G, and if you really drop some money Republic Wireless offers the vastly superior Motorola X. But this phone is a marvel of engineering and price. If all you need are the basics of a smartphone, it’s a great choice. Call quality is good on cellular and great on WiFi. The screen is decent, though I don’t recommend holding it up against a better one like an iPad or an HTC One M8. This is a phone you give a teenager as a starter phone, or that you use when you want the most basic email/phone/texting machine available. It has a lot of drawbacks to go along with the low price, and it’s easy for a power user to turn their nose up at it, but then you have to step back and remember, this is a $99 phone, and it’s incredibly capable for a device at that price.

Let’s talk about the bad parts of the Motorola E. The camera is dreadful, to the point where it almost would have been better if Motorola just didn’t include one at all. It’s that bad. Here’s a picture I took of my town’s annual “Light Parade” … 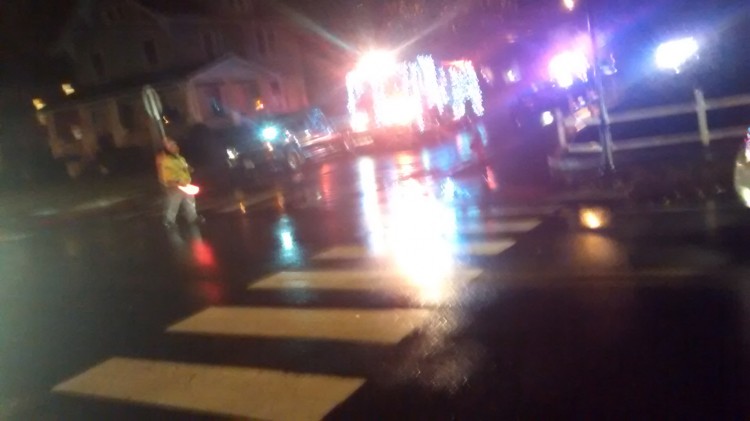 … and here’s the same photo taken with my HTC One M8. 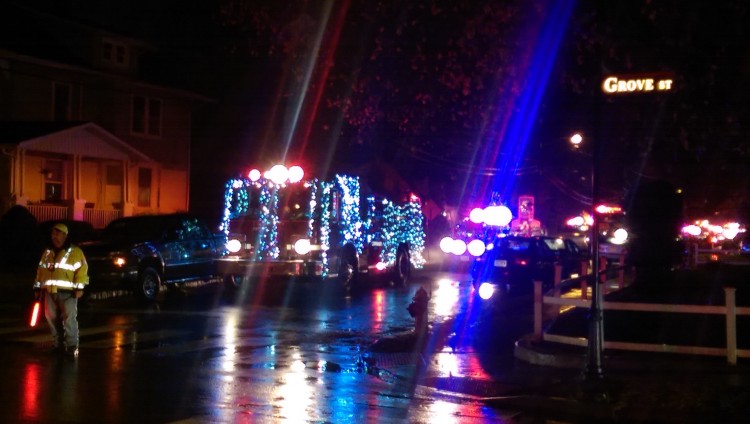 Also, the Moto E is a bit sluggish. There’s a noticeable stutter when pulling down the notification shade, and high graphic games struggled slightly. I’m not much of a heavy gamer, but I did test two of the higher-resource games I could think of, “Despicable Me: Minion Rush” and “Plants vs Zombies 2”. Both are big games with lots of animations, and I found that they ran ok on the E, but not fantastic. If I didn’t have a point of reference from a faster phone and tablet at my disposal, I think I would not have been as bothered by the slight drag, but if you’ve used a faster phone you’ll notice the slowdown. However, it was more than capable of playing videos from YouTube and Netflix with no issues, and certainly pulling emails and checking Facebook went smoothly. 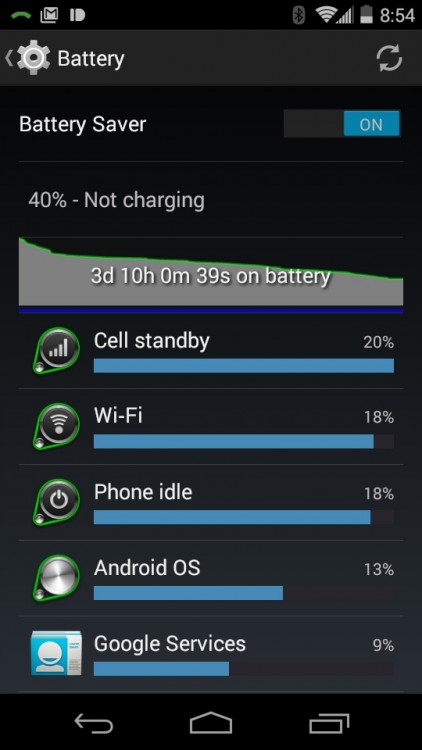 Speed and camera quality were my biggest negatives, but the Moto E had a lot of positives too. Battery life was fantastic; with very light use I easily made it a few days on one charge. Currently I’ve hardly used it since Friday, and it’s been checking emails and syncing notifications all weekend, and the battery is at 47% after 3.5 days. Games and heavy video use will obviously drain it quickly, but light use means a good long battery life. I’ll cover this more when I talk about Republic Wireless, but I also found the reception to be quite strong, both on 3G cell service and WiFi. Voice quality was also quite good, and I liked that it had front firing speakers. The speakers are pretty harsh sounding and not very powerful, but they eek out a slightly better sound by being in front instead of on the bottom or back. 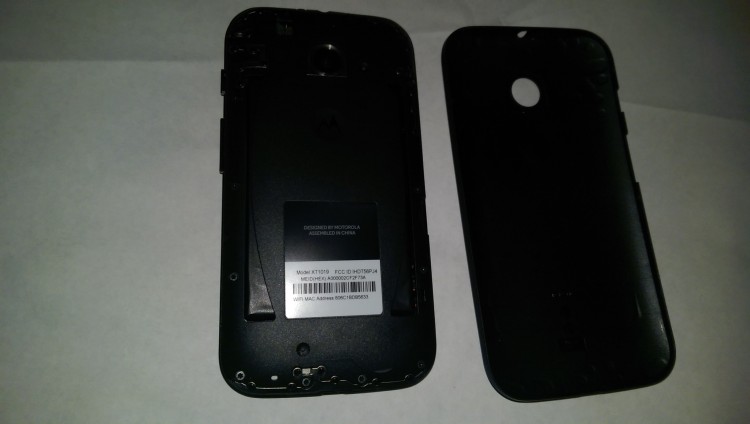 Finally, the build quality is phenomenal. This is a phone that can easily take a beating. My 18 month old son played with the phone a fair amount, and it got tossed, chewed, and pawed with no ill effects, which says a lot about how tough it is. The back is rubberized and grippy, and it feels just very dense and solid. While the back does come off (and you can change the colors of the back plates), the battery is not removable, though Motorola does include a MicroSD slot. That’s a positive since the phone itself has only 4GB of storage. Still, if you handed it to someone on the street and asked them to assess the MSRP based entirely off the physical feel of it, I doubt anyone would know it’s so inexpensive!

The other part of the Motorola E experience, is, of course, Republic Wireless. Republic Wireless is a mobile virtual network operator (MVNO) piggybacking Sprint that uses WiFi calling to lower the overall cost. Essentially, if you’re on any WiFi network, a Republic Wireless phone will use WiFi for calls, texts, and data, and then seamlessly hands off to Sprint’s network if WiFi drops out. We’ve covered Republic Wireless before, and Dan’s review of the Motorola G gives an excellent rundown of the service as well. I’ve heard mixed things about Sprint’s network, but in my experience it worked perfectly fine. I was able to stream Google Play Music without issue, and while on a long car ride I was even able to get Netflix to stream some Thomas the Tank Engine videos for my son. (This was also where my son helpfully tested the durability by chucking the phone across the car when he got mad at his continued inability to leave the car, due to that whole driving on the highway thing.) We successfully picked up enough signal to stream Thomas from New Jersey to upstate New York, and really only lost signal once we crossed into Vermont. To be fair, our Verizon signal also went a bit wonky in Vermont, so overall it handled reception quite well.

Republic Wireless offers four plans, only three of which are applicable to the Motorola E. For $5 a month, you can do WiFi calling and data; for $10 a month, you get cellular calling and texting but only WiFi data, and for $25 a month you get unlimited amounts of all three, but only 3G data. There’s also a $40 a month plan that offers 4G, but the Moto E is 3G-only. Honestly, $99 up front and $25 a month for unlimited everything is a pretty great deal. If you don’t absolutely need the fastest and most cutting edge device out there, this is a pretty amazing deal for a contract free device.

Is this the right device for you? If you aren’t concerned about having the most cutting edge phone, and you’re looking for durability and affordability first and foremost, I would put Republic Wireless and the Motorola E high on your list. I could see this as an excellent travel phone, or a “starter phone” for a teenager looking to prove they can be responsible with a smartphone. Obviously, you should check Sprint coverage in your area, but I think if you want a prepaid carrier and a simple phone, the Motorola E and Republic Wireless combo is an excellent one!

What I Liked: Affordable plans; phone retails for a low price but does not feel cheap; excellent battery life; has a microSD slot; Motorola’s additional software doesn’t add much bloat.

What Needs Improvement: Camera is painfully bad; phone can be a bit sluggish.