Republic Wireless’ hybrid cell/VOIP service is among the most cost-effective ways to have smartphone connectivity. They offer the powerful Moto X and the cost-effective Moto G. Mitchell and I will be reviewing the Moto X. In this post we will take a look at the Moto G on Republic Wireless is one of, if not the, best deals in cellular today.

Before looking at the Moto G hardware it’s worth running down what makes Republic wireless special. The phones offered by Republic automatically switch from using Wi-Fi for voice calls to the cellular network when a Wi-Fi signal isn’t available. As a result each individual phone uses far less of the network’s resources. For example, if you spend 90% of your time in a WiFi area your phone will only use the cellular system for 10% of the time. In the process everybody wins.

Republic Wireless works on the Sprint network but, as previously explained, relies on it far less than Sprint’s own phones do. By seamlessly switching off you get the same close-to-ubiquitous connectivity without being as great a drain on the network. Part of this savings is passed along consumer by Republic and, as a result, it is a rather inexpensive way to get great service. 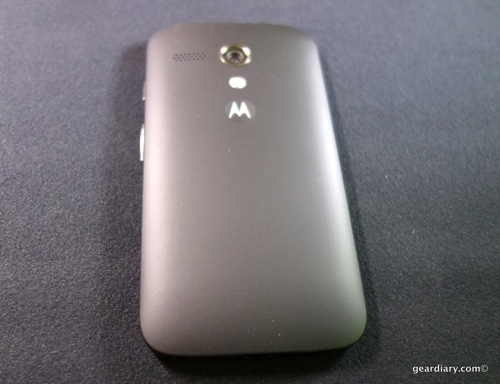 The logic behind this approach is that the vast majority of us spend the vast majority of our day in an area with Wi-Fi coverage. That’s certainly the case for me since I have wireless at home and at my office and the bulk of my time is spent in one of the two locations. Obviously if you don’t have access to a Wi-Fi connection most of the time this will not be ideal but with the growing number of Wi-Fi hotspots and many of the number of cable companies offering their own Wi-Fi hotspots is increasing number. Republic recognizes this trend and leverages it quite effectively.

Plans are no contract and you can switch between them twice a month without a penalty. Why would you want to do that? Simple! Say I have the $25 per month plan but am leaving the country for two weeks. I can drop my plan down to the $5 plan, use my phone on WiFi while traveling and then bump it back up once I return home. In the process I save money by not paying for the higher plan during the period when it is useless to me. How cool is that? 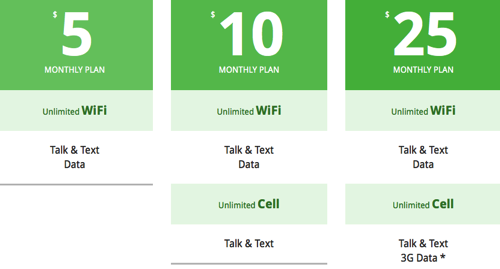 Here’s the rundown of plans offered by Republic 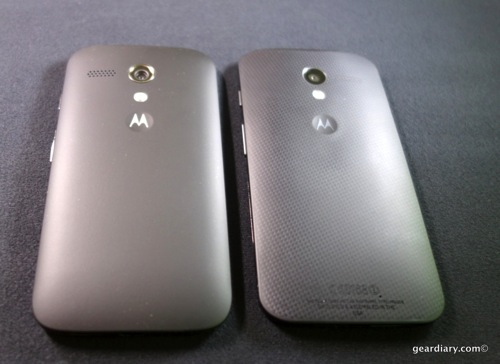 The only real downside to using Republic Wireless is the fact that, in order to have a seamless handoff between the cellular network and the Wi-Fi hotspot, the phones offered by Republic Wireless need to be set up specifically to work on the Republic system. That means you can’t simply bring your own device to the network but, instead, need to purchase one of the handsets they offer. That’s not an issue if you like the phones Republic offers but the initial phones were far from cutting edge. Now that Republic offers to different Motorola phones that concern is gone. The $299 Moto X is an absolutely impressive phone that I expect just about anyone would be happy to own. The Moto G is $150 less. In both cases you purchase the phone outright so this is the unsubsidized price. (There IS no subsidized price.) And even though the Moto G Republic Wireless is a somewhat stripped-down piece of hardware compared to the Moto X it still gets the job done at an amazingly low price.

The Moto G on Republic Wireless is,

designed for all the things you want to do – talking and sharing photos, watching videos, checking scores, getting directions, listening to music, you name it. Moto G also gives you choices. Different backs to reflect your unique style and access to more than 1 million applications on Google play.

Where this phone stands out more than anywhere else is in its price. Available in any color you want so long as the color you choose is black, the Republic Wireless version of the Moto G is $149 for the 8GB version and $179 for the 16GB version. Obviously it goes without saying that it is worth spending the extra $30 to get the 16GB of storage capacity. 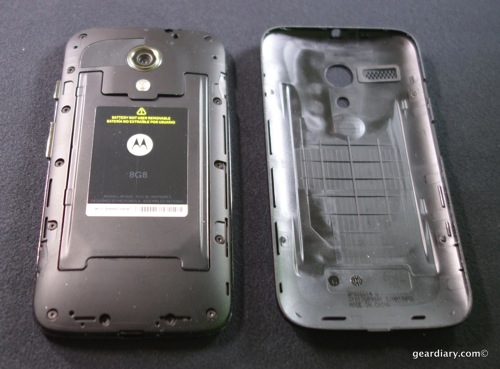 This is especially so since the Republic Wireless version of the Moto G does not have a microSD expansion slot. That’s a bit of a bummer and I cannot discourage getting a smart phone with only 8GB of capacity and no option to expand it strongly enough. Even 16GB is rather low these days and the headache of having to manage an 8GB phone, especially since you don’t get the full 8GB of storage, simply isn’t worth the $30. The good news is that the Moto G comes with 50 GB of Google Drive storage free for two years. (And that’s on top of the 15 GB that is already available as a standard account.) 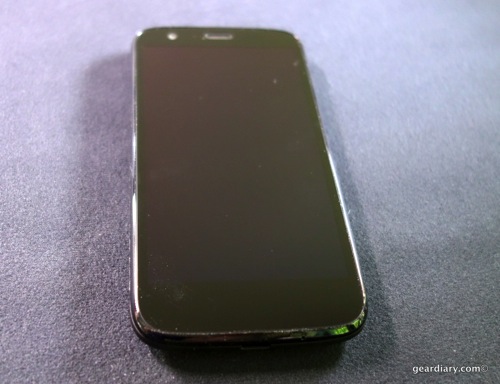 The phone has a 4.5″ HD display (true Moto X is 4.7″) and promises battery life that will run all day. The Qualcomm Snapdragon 400 processor with 1.2 GHz quad-core CPU processor certainly isn’t as powerful as the brains in the Moto X (it has a Qualcomm Snapdragon S4 Pro (1.7GHz Dual-Core Krait CPU, quad-core Adreno 320 GPU) but it gets the job done. At no time have I noticed any serious legs or stutters when using the phone.

And although the phone comes in any color you want so long as it is black, you can purchase accessories that will allow you to swap out the back of the phone and personalize the color. You can also purchase a back that includes a flip cover if you want to protect its gorgeous display.

The Moto G feels like an absolutely solid device. The reason that is notable is the fact that this is truly a budget phone. This is a phone that can be purchased off contract for use on other networks for under $200. And since the model that Republic Wireless requires you to purchase your phone outright the $149 or $179 price is the actual purchase price of the phone not the subsidized price. Said another way, this is a phone you can purchase outright for under $150 but it doesn’t look, feel or function like a budget phone. It’s an impressive accomplishment and one worthy of note.

Is the Moto G perfect? No way. But this phone is certainly the best smartphone deal going. Combined with Republic Wireless’ bargain model it is an absolutely winning combination. Unfortunately the Moto G is not the Moto X. 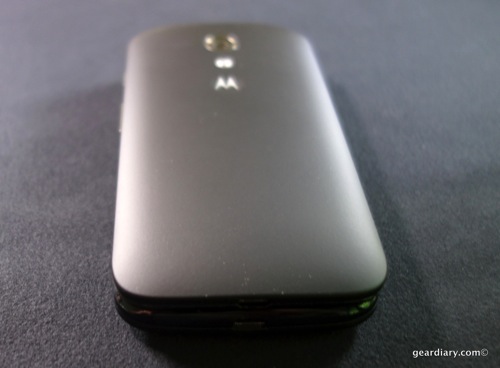 Moto G on top of the Moto X

The two phones have pretty much the same body size but the Moto X is a powerhouse. The Moto G is not. In addition, two of the features that have me loving the Moto X are the ability to activate Google now simply by saying “OK Google Now” and do your entire search by voice and the ability to see notifications without having to first unlock the phone. Those features may initially appeared to be gimmicks designed to sell phones but I found myself using both on a regular basis. No gimmicks here… just two functions that make using the Moto X that much easier. Sadly both functions are missing from the Moto G. Still, the Moto G is a solid piece of hardware running the latest version of Android at an amazing price. It runs on a network that will save you serious money too. The Moto G Republic Wireless is not going to wow anyone… until they get their bill. Learn more and get yours here on the Republic Wireless website.

What I Like: Solid phone running the latest version of Android; unbelievably good price for the phone and plan