As the New England Patriots celebrate their victory today, it’s time to look at another related feat – the spot-on prediction of the simulated Super Bowl game in the Madden NFL 15 video game. 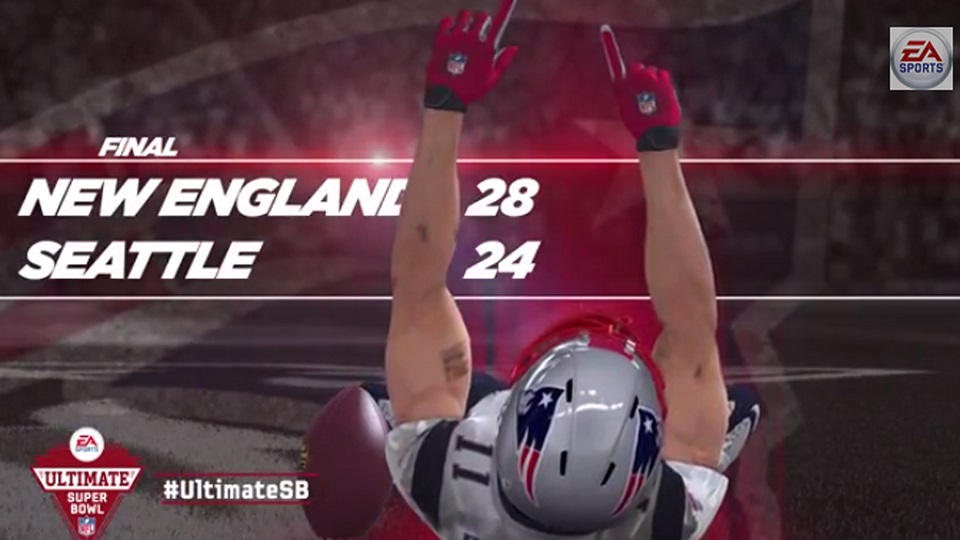 The final 28 to 24 score of the Madden NFL 15 sim was amazing enough, but the sim also predicted player stats like wide receiver Julian Edelman getting the game winning touchdown pass and eight catches for 106 yards (actual – nine catches with 109 yards) and quarterback Tom Brady’s 335 yards and four touchdowns (actual – 328 yards and four TDs).

It’s great to see focus on the game of football. Hopefully people won’t concentrate on the potentially negative aspects of these successful sim like using them to bet on future Super Bowl games.

The Madden NFL games have always focused on creating authentic experiences with evolving graphics engines and AI in each game element. Will it get to the point where it cannot get any better? I think the larger TVs are actually skewing that possibility as each detail gets high levels of scrutiny from several perspectives. Just like audiences skewer noticeable “flaws” in special effects, audiences increasing demand perfection, which takes incredible work to even come close.

I think these game experiences are amazing! Even in 2000 playing Madden on the PlayStation 2, several people thought I was watching a real game.

Marshawn Lynch asked if he’s surprised he didn’t get the football (on the one yard line at the end of the game). Says “No.” I ask him, Why not? Says, “Because football is a team sport.”