My main work devices are my iPhone 6 Plus, my iPad Air 2 and my 15″ MacBook Pro. At any given moment I might be working on any one of them. Having a keyboard that lets me quickly and easily switch between devices is something I have long wanted. Thanks to the Logitech K480 keyboard I now have exactly that keyboard. 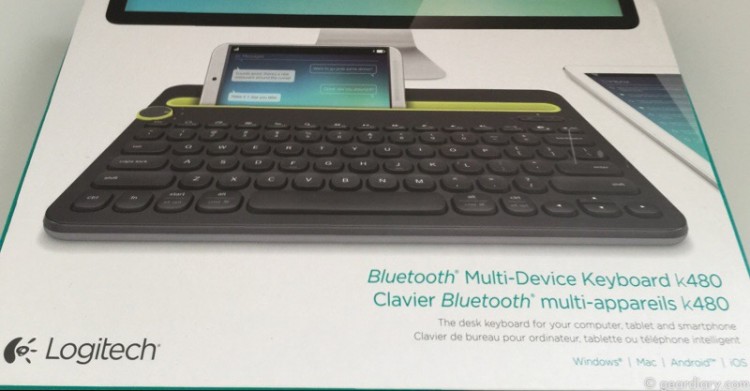 The company describes their offering as “A new type of keyboard for your computer—that also works with your smartphone or tablet.” Thanks to Bluetooth, a three-device switch and a well-placed groove that holds a wide range of devices at a perfect viewing angle they have a product that delivers on its promise. Able to work with Windows, Mac and Chrome computers and all Android and iOS devices, this is truly a keyboard that is designed to be multi AND cross-platform. 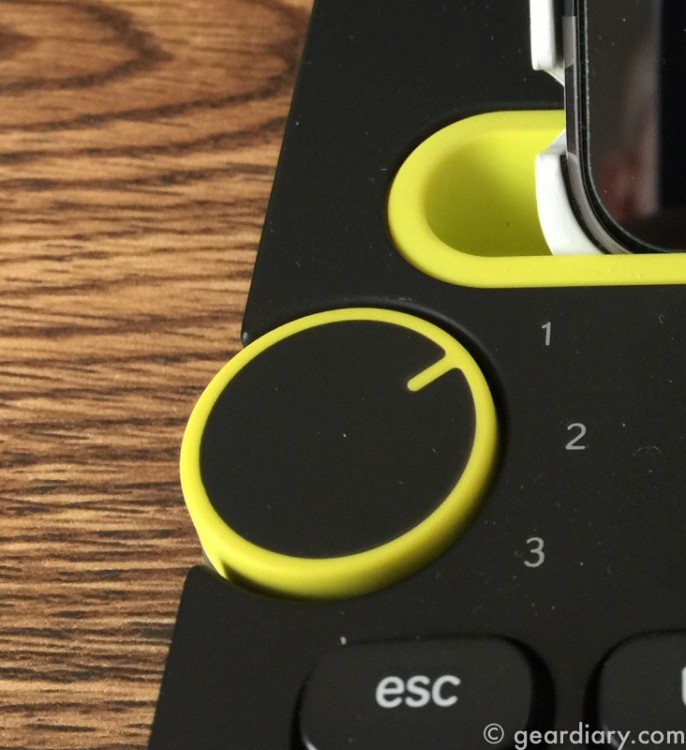 Switching between devices is as simple as turning the “Easy-Switch.” It offers three different positions with each immediately connecting to one of three previously paired Bluetooth devices. 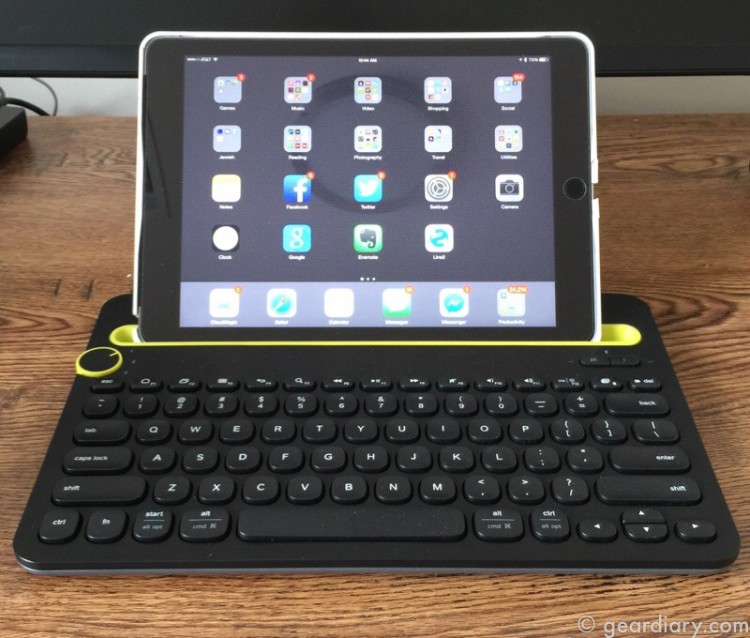 The integrated cradle holds most phones and tablet at a perfect angle for most people to be able to read the screen while they are typing. The plentiful slot will work with phones and tablets that are up to 10.5mm (0.4 inches) thick and 258mm (10 inches) wide. That means it is perfectly suited to work with both my iPhone 6 Plus and my iPad. The fact that it works perfectly with my MacBook- I’m using it to write this review- means it is the ideal keyboard for me to have on my desk in my home office. And, were the keyboard a bit thinner and lighter, I can definitely see carrying it with me when I travel. Unfortunately it is a rather hefty accessory and measures in at 0.79″, 11.77″ wide and 7.68″ deep. It weighs in at just over 1.8 pounds. In other words, this is a movable keyboard but I would not consider it to be a mobile keyboard by any stretch of the imagination. It belongs on a desk and, when used in such a situation, performs admirably.

The keyboard is available in white and black and, in keeping with most Bluetooth devices, has a range of up to 30 feet. Battery life is a ridiculous 2 years and a simple On/Off power switch and battery life indicator light will help you maximize the life you get from the batteries. I do find it a bit odd that the keyboard doesn’t have a rechargeable battery but, considering the low price of just $49 I guess Logitech had to cut corners somewhere. It certainly is a reasonable trade-off.

The K480 works with all Bluetooth wireless computers or mobile devices that support external keyboards (HID profile). The include, PC running Windows 7, Windows 8 or later, Apple computers running Mac OS X or later, computers running Chrome OS, iPads and iPhones running iOS 5 or later and Android tablets and smartphones running Android 3.2 or later. In other words, if you aren’t using an antique for your computer this keyboard will work with your current devices.

Inside the box you will find the keyboard and user documentation. There is no USB cable to be found since this keyboard uses two AAA batteries. Forutenately the keyboard ships with said batteries pre-installed. 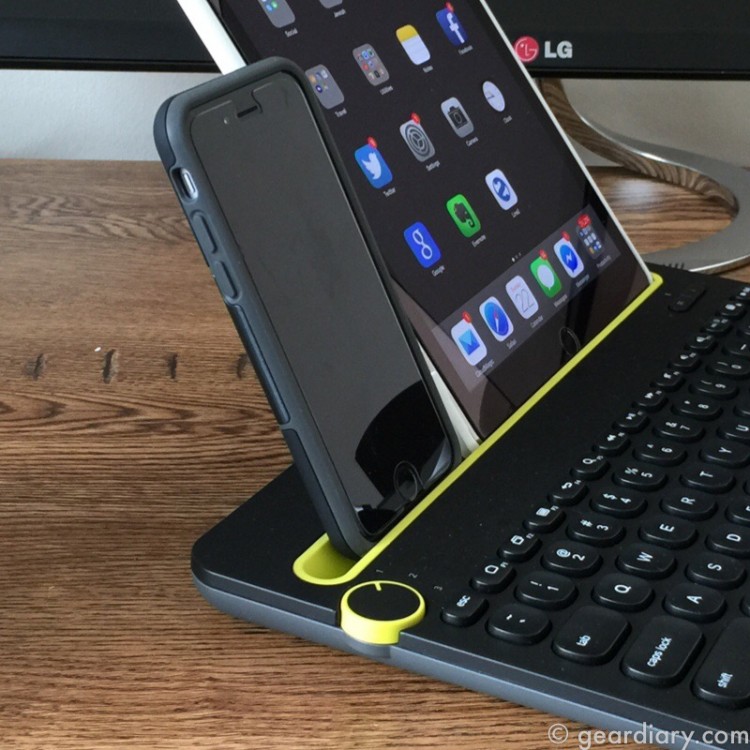 I especially love the fact that I can have both my iPhone and my iPad in portrait mode sitting in the keyboard’s cradle. From there I can switch between the devices by simply turning the dial. Yeah, if Apple isn’t going to give us real split screen multitasking we will just have to take it into our own hands. 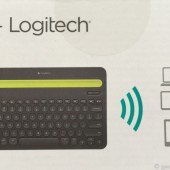 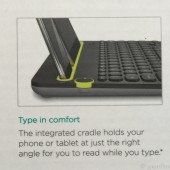 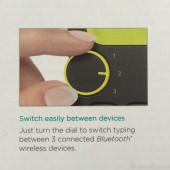 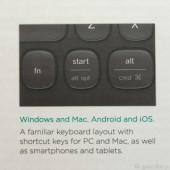 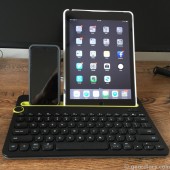 The keyboard does take a bit of adjustment. The thickness of the accessory means the top of the keys is higher than pretty much any other keyboard I have used. Also, the round, island keys have a lot of play and make a good bit of sound when struck. To be honest I initially had concerns over this keyboard and whether it is something I would want to use. Having now used it for a few days I can absolutely say that it is not only a good keyboard but that this keyboard has replaced the one that was previously in use. (And that’s a big deal since I LOVE my Apple keyboard.)

If you switch between devices on a regular basis you owe it to yourself to check out the Logitech K480. At under $50 it is a steal! Learn more here.

What I Like: Works with three devices at once; Simple to switch between devices; works with a range of different platforms; Great battery life

What Needs Improvement: Keyboard took a bit of adjustment when moving from Apple’s offering; Takes AAA batteries and is not rechargeable