I posted recently about my quest for a new fitness tracker, and I found one that (so far) I love. It’s only been 24 hours but it seems to check off all my boxes…and it wasn’t any of the ones on my initial list! It isn’t even that new, but my new Pebble is exactly what I was looking for! 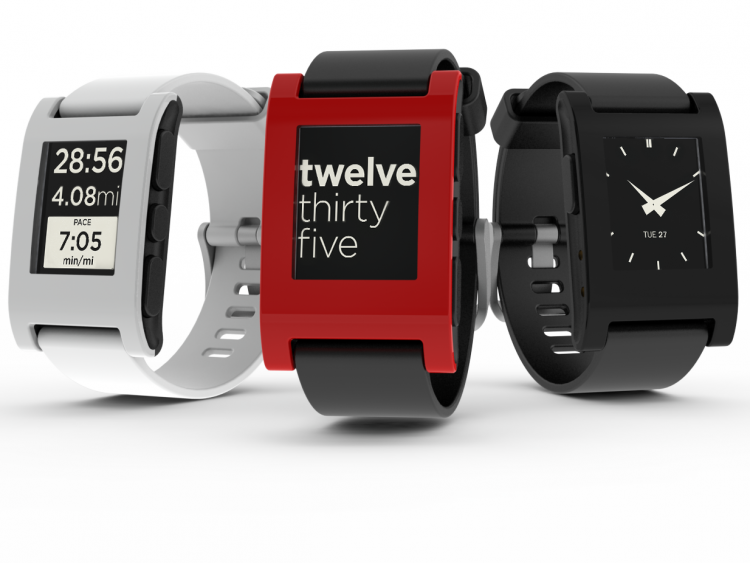 Here were my criteria:

I had on my initial shortlist the Fitbit Charge HR, the Withings Activite Pop, and the Garmin Vivosmart, but none of them felt like a great fit. I eliminated the Withings due to the limited abilities of the Pop itself, and the Vivosmart had mixed reviews on Android. The Charge HR seemed nice, but I don’t do much heart rate training (and the sensor isn’t great for high activity measurements) so it seemed like a lot of money for not a lot of benefit. I briefly considered the Fitbit Surge, but the reviews indicated it was somewhat half baked and was at the top end of what I wanted to spend.

But looking at the Surge did help focus what I wanted better. I realized I wanted something that could be a multisport device. I am running sporadically outside and often indoors on the treadmill, but as it warms up that will change. We also do a lot of hiking and walking as a family when it’s nice out. At the same time, the main focus of my workouts as of late have been weightlifting, so I wanted the ability to at least have a stopwatch or timer handy. I looked at the Sony Smartwatch 3, since that would have covered what I needed, but Android Wear still seems a little half baked, and I wasn’t thrilled by the limited battery life. Then I remembered the Pebble.Waterproof, has pedometer apps, offers Runkeeper integration, and clocks in at $99. It was a jack of all trades, master of none, but enough of a smartwatch/fitness watch hybrid to possibly meet my needs.

So far, I absolutely love it! It’s got a few quirks, but I think this was the perfect choice. Here’s what I have installed/have used it for so far:

Basically, I can track my fitness fairly smoothly, and while I wouldn’t say SMS and news alerts on my wrist are earth shattering, it’s convenient. We were at my town’s St Patrick’s Day parade over the weekend, and it was freezing cold. I was getting texts from friends who were meeting us there, and I could see their ETA without pulling my phone out. This left my hands free to stay in my warm pockets. It’s the epitome of silly convenience but I won’t complain about having it! I also love that the screen is always on, as that makes it a far more effective watch than having to shake my wrist or hit a button to see the time. Battery life has been excellent so far as well; I charged it fully on Saturday afternoon, and as of this afternoon I’m at 60%. That’s with loading and unloading apps and watchfaces and fiddling with it to get it set up the way I like. I’m impressed!

Now, there are a few quirks with using the Pebble as a fitness tracker. These are mostly of concern if you’re on Android. The Misfit app doesn’t currently sync to the Misfit Android app, though there have been claims of it coming in the future. There is a Jawbone watchface that tracks your movements and can sync to the Jawbone Android app, but I found the Jawbone UP Face seemed to pick up every little movement as a step. It was also more of a pain to look through prior stats on the Pebble with the Jawbone (you have to shake your wrist around) whereas the Misfit is a full app, so you can scroll up and down to review prior history in detail. As far as accuracy, I tested the Misfit app against the Fitbit app on my HTC One M8 yesterday and today. Yesterday Misfit recorded me as having a hair over 10,000 steps, while Fitbit put me at 8,444. However, there was a two hour span midday where my phone was charging and not on me, and during that time I was swapping some furniture around our house. I made at least four trips up and down our stairs, plus outside and around the house. Today Misfit has me at 4120, while Fitbit lists 3,388. Again, about 200 of those missing steps on the Fitbit are because my phone was charging on my desk, and I’m not terribly worried about a variance of a few hundred steps in either direction-the idea here is to get a baseline of moving a bit more, not hit an exact number every day (this is a great reference on not getting hung up on the exact steps). The important part is that until my phone was sitting on my desk while I was walking around, Fitbit and Misfit were in agreement within 300 steps, so it’s obvious the Pebble isn’t picking up random stray gestures consistently as steps. Given the accuracy of Misfit, and the fact that you can scroll through average history for both sleep and movement right on the watch, I’m ok with the lack of sync for now. I may take a look at some of the other pedometer apps that offer Android sync in the future, but we’ll see.

It’s only been a few days, but I am very thrilled with my new Pebble. It isn’t a full fledged fitness tracker, and it isn’t a full GPS watch, nor is it a full smartwatch compared to Android Wear or the Apple Watch. But it’s a solid little device that does the important parts of each of those jobs quite well, and I am super excited to see what else it can do!

Stay tuned in the next few weeks for a much more thorough review of my new Pebble and its prowess as a fitness watch!