There’s one thing that I think might be the greatest invention ever: Pizza. Everyone has their favorites, but mine is Domino’s. That crust with the seasoning, the green peppers; the pepperoni; the chicken … I probably could beat Dale Lamoureux in a box folding contest! So I was excited to learn that Domino’s has launched ordering from Samsung Smart TV’s!

The new announcement is a part of a Domino’s AnyWare, a host of options that customers can use to place an order. Some of those are Pebble and Android watches, Ford SYNC AppLink, and voice ordering using Dom from the Domino’s App. 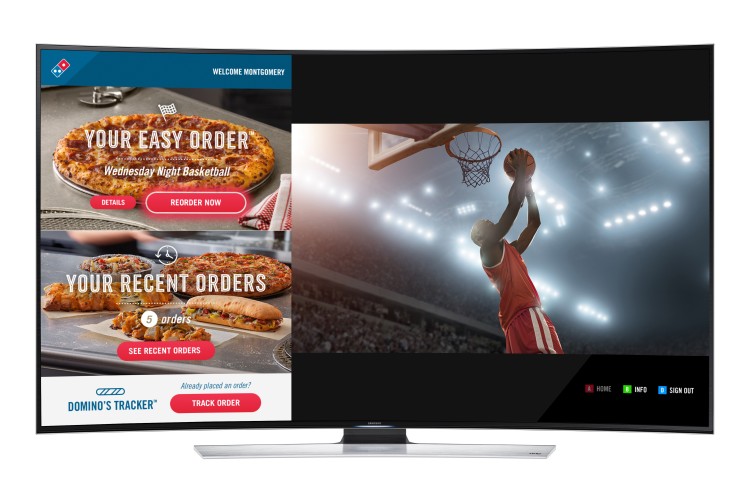 Your Smart TV already does everything anyway, why not order your food from it? With the Final Four starting this weekend, this announcement by Domino’s is something I can see MANY people using in their homes.

Domino’s is already the World’s leader in pizza delivery, but now, they are making ordering avaialble for your Smart TV. Obviously you have to have a Pizza Profile with a saved “Easy Order” settingto order, but as long as your Samsung Smart TV is a model from 2013 or newer, you can be like me and soak in your tears about your bracket AND order an oven baked sandwich and some stuffed cheesy bread.

“Basketball fans are going to be glued to their TVs, and now they don’t have to miss a minute of the big game to order a delicious game day meal,” said Kevin Vasconi, Domino’s chief information officer.

“Customers can place and track their order, all while still watching the game on their Samsung Smart TV.”

I’m already stoked for this, and I’ve already placed a “future order” for the MSU/Duke game for the watch party we’re hosting on Saturday.  Don’t be that person waiting until the last minute on April 4th scrambling to find food before the game, you’ll be in front of the TV anyway… Order from Dominos today, and then again come Saturday!