Even though it’s April Fool’s Day, one thing that is not a joke is for the first time ever, US Festivals, known for booze, nudity, mud, fights and more are now listing selfie sticks as “prohibited items“. 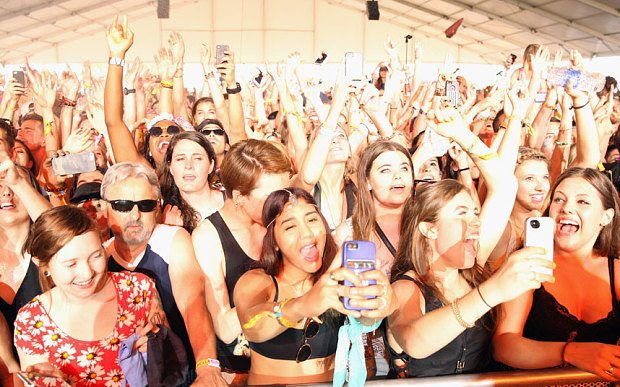 Selfie sticks have become a very popular photo-taking tool that allows the user to snap photos of themselves (and other) in front of monuments as well as group photos. But this summer there will be a few festivals that ban the popular gadget, starting with April 10th‘s Coachella in Indigo, California and Lollapalooza in Chicago on July 31st through August 2nd. On Lollapalooza’s site, there is a Frequently Asked Questions section where it states that there will be no “GoPro attachments like sticks, selfie sticks and monopods.” That’s a bit much right? Well apparently Coachella has a similar section.

There are a few festivals like Bonnaroo, Governors Ball and Sasquatch that haven’t announced if they will be following the same pattern and banning selfie sticks. But there have been a few major British venues, like: O2 Academy Brixton, London’s O2 Arena and the SSE Wembley Arena. Be clear though, you are still allowed to bring beach towels, flasks and the like though, so you’re safe if you carry your libations with you.

Even though this looks like a way to avoid obnoxious people holding them up and obstructing someone’s view, or worse like using them as weapons, a lot of people are not happy with the hate that the sticks are receiving. Lollapalooza tweeted out:

“For safety, to speed security checks at the gate & to reduce the number of obstructions between the fans and the stage.”

Just last week, the Ultra Music Festival that’s held yearly in Miami, Florida banned the sticks from their event, which is the world’s largest electronic music festivals. They tweeted in March:

Now is selfie sticks are such a hazard to concert goers, I guess there will be no canes and crutches allowed either? Personal opinion from someone who doesn’t use selfie sticks: If you’re banning folks from taking pictures with a stick, ban shoulder rides and being over 6’0″, since both obstruct my view.