Juicies is back on Kickstarter again, this time for their Extra-Long and Extra-Short Juicies+ USB cables. These lightning or microUSB charging cables are tangle-proof, the ends are made of anodized aluminum, and have extended stress relief to prevent cable tears. You can pledge today to receive an XS (1 foot) or XL (10 feet) starting at $19 and $25 respectively. 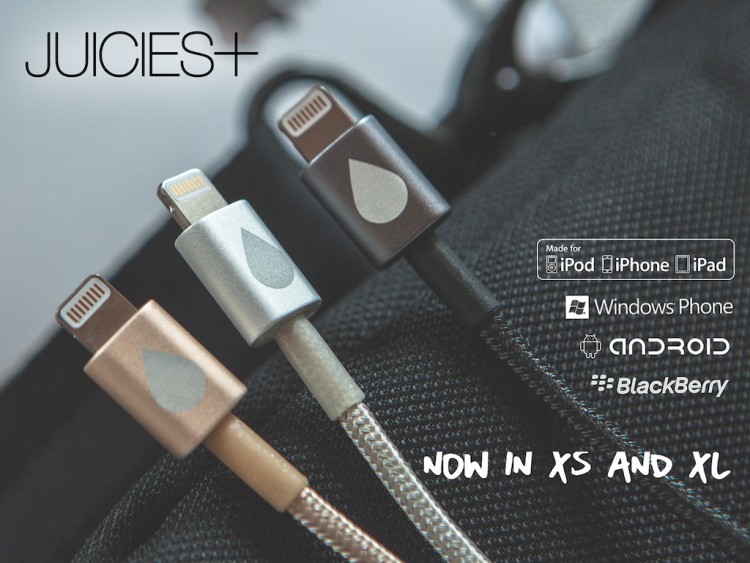 These “high-quality” gadget-charging cables are meant to replace your “inferior” OEM charging cables that came with your phones or tablets.   They come in either lightning for Apple devices or microUSB for almost any other device out there. They come in three different color choices: black, gold, or silver. Juicies+ USB cables are Apple MFI certified, so they’re guaranteed to sync and charge your iPhone or iPad devices. The cable is even covered in a hydrophobic coating that prevents water from infiltrating the cable. To be honest, they’re very nice cables … when they work.

After receiving my black Juicies+ lightning cable, I enjoyed it for about three weeks until it suddenly stopped working. I then went to their Kickstarter campaign comments only to find a ton of comments from angry backers who had either still not received their reward or had received shoddy cables like mine. After messaging Juicies via Kickstarter in September of 2014 per their instructions and waiting almost another month to send a second message, I finally received a response in October, 2014 saying that there were “very few cases” where the Apple chips inside the cables were dying, and that they would email me at the end of October when the second wave of replacement of the replacement process was going to happen. They also asked me (but did not require me) to ship back the defective cable to them at my cost for their inspection. I declined.

I heard nothing from Juicies for a while, so I decided to message them again at the end of November, 2014, asking when the second wave of replacements was going to happen. I didn’t receive a response until the end of December, 2014 saying that there were shipping delays that they didn’t account for, and they are still collecting replacement requests from backers. This was when I quit trying to get in touch with Juicies and decided to let things happen as they would.

Finally, on April 10th, 2015, a mere SEVEN MONTHS after receiving my defective Juicies+ cable, I received an email from Juicies saying that they had re-engineered the manufacturing process and that I should receive a tracking number for my replacement cable shortly. So, as I wait for my replacement Juicies+ cable, I don’t think I’ll be handing over any more of my hard-earned cash to them for any other Juicies+ USB cables anytime soon.  Some may make the argument that they might have learned from their mistakes…but after my experience, I’m not willing to give them the benefit of the doubt.