WARNING: The products discussed may contain or use nicotine. Nicotine is an addictive chemical; in many cities and a few states, you must be 21 to purchase vaping products or products containing nicotine. Please familiarize yourself with and obey the law in your location.

The Innokin Cool Fire IV is a new, low-end regulated device that looks great, but is it too late? Innokin was on top of the world this time last year and each new device they released knocked it out of the park. Something happened and Innokin fell behind. 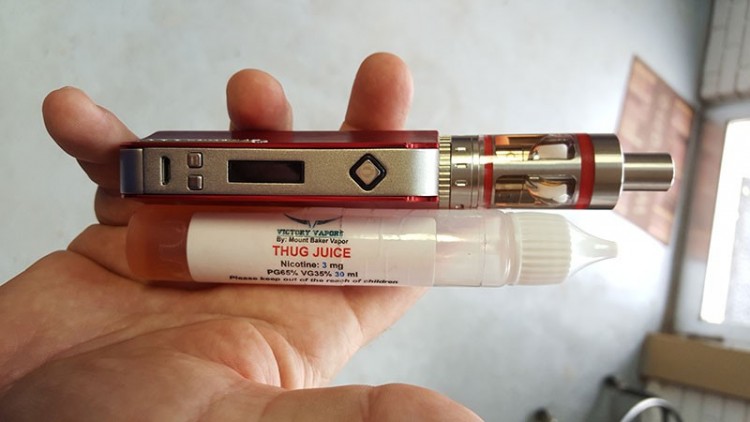 When Innokin announced their new line up of devices, customers were underwhelmed with their Innovation and specifications, specifically the wattage limits. Other companies were offering devices pushing 50 watts or more and Innokin planned to release newer versions of their existing devices with a max wattage of 20 watts. The popular MVP was released with 20 watts, up from 11 watts and well behind other devices on the market at the time they announced them. Somewhere along the way, Innokin decided to release the MVP3PRO, taking the wattage up to a respectable 60 watts and the Cool Fire IV with 40 watts. Both of these devices are now on the market. I’ll be taking a look at both in the coming weeks. I consider both of them entry-level devices at this point and this level of device is a crowded market.

As the IV might indicate, this is the 4th version of the Cool Fire from Innokin or is it? No. It’s the 3rd version. 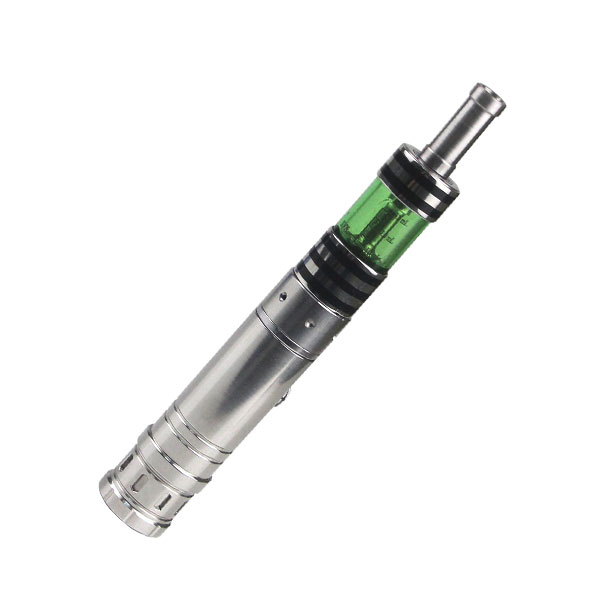 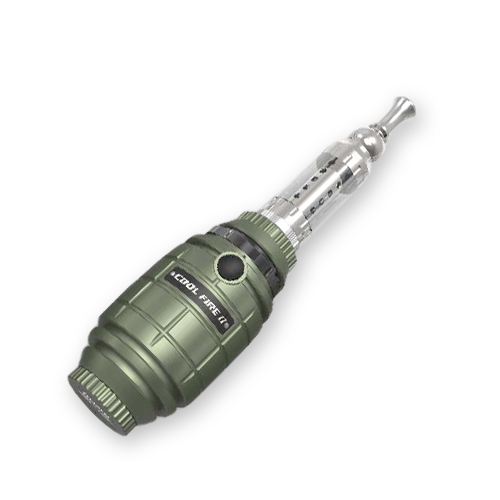 The original Cool Fire (left) was a simple, single 18650 battery regulated device that went up to 8.5 watts. This was the 1st more advanced device I saw someone using in person a year and a half ago. It was the device that made me want to give vaping another try.

Where is the Cool Fire III? No idea. I guess it never made it to market.

The Innokin CoolFire IV is:

We finally have a new Innokin product that has decent specs! 40 Watts! 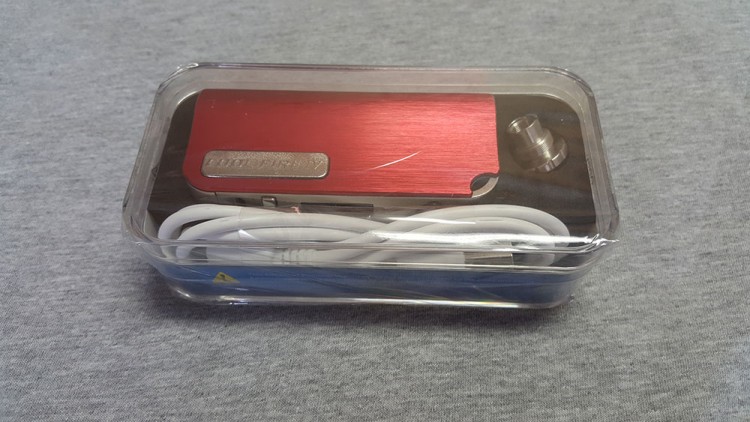 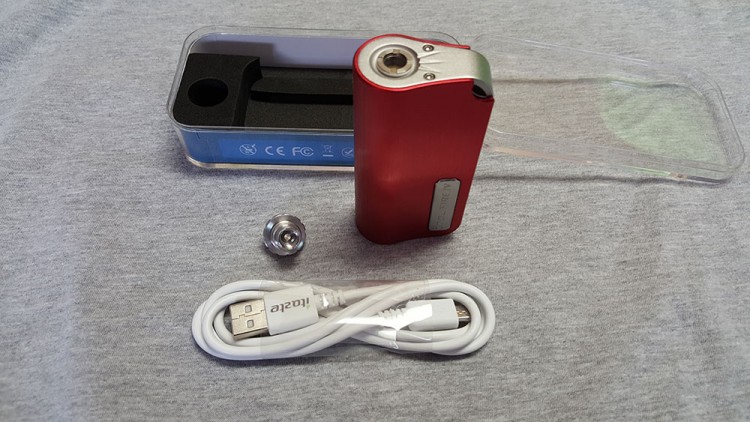 The Innokin Cool Fire IV is packaged almost exactly how the MVP II was packaged. It comes in an iPhone like plastic box with the device showing. This kit doesn’t come with a tank. Just the device, charging cable, and an adapter.

Here’s what came in the box.

The Innokin Cool Fire IV has a sexy, small, c-frame design similar to the SX Mini M Class I reviewed last week. The materials are nowhere near the same quality though. Instead of heavy alloys, the Cool Fire IV feels like it is made of lightweight aluminum. It feels very light but sturdy. 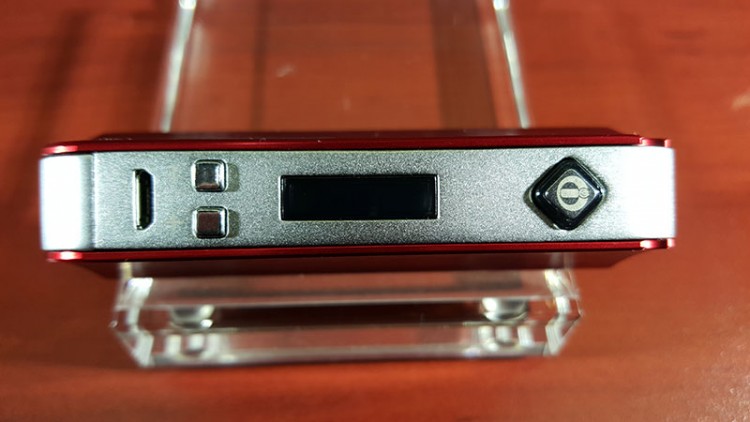 The front of the Cool Fire IV is where you will find the Micro USB charge port, the up and down buttons, a simple display, and the fire/power button. 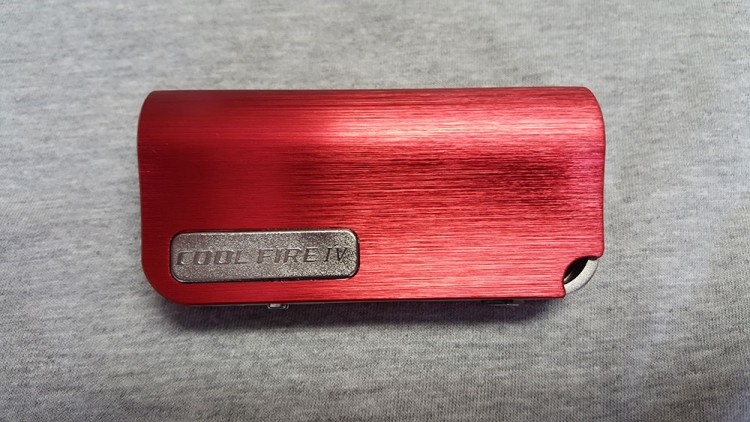 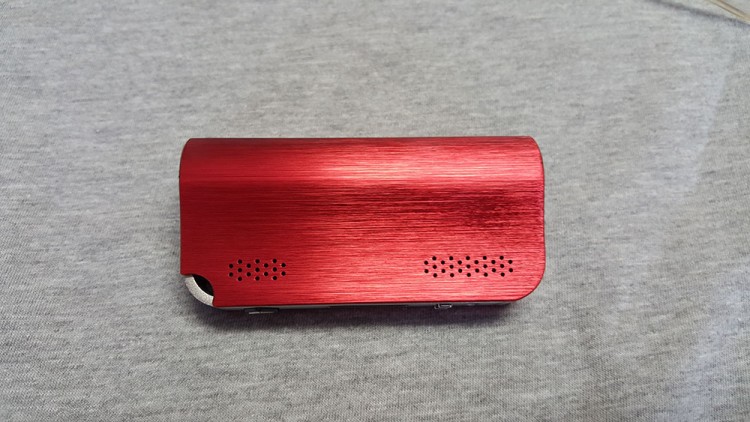 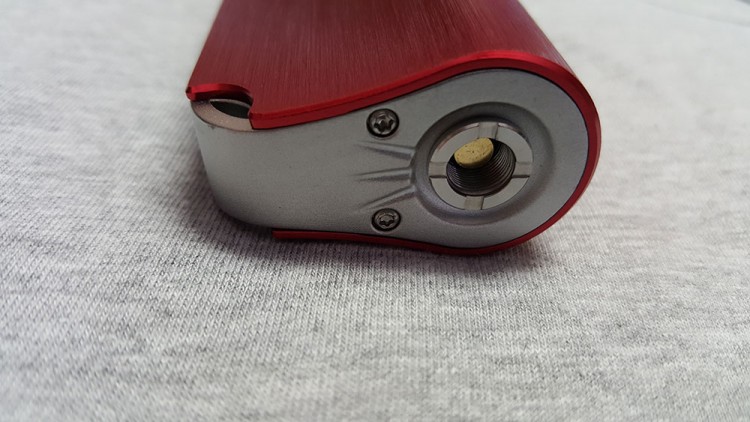 On the top of the device, you will find the 510 connector that should be compatible with any atomizer you want to throw at it. The center pin is spring loaded and the threads are stainless steel. 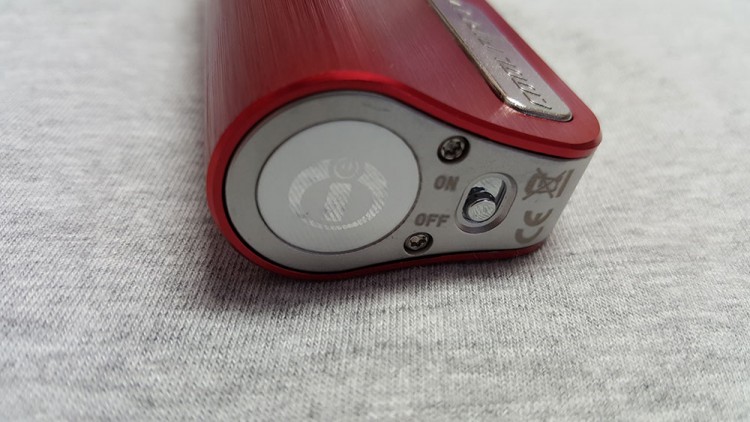 The bottom of the Cool Fire IV has an on/off switch. This is a feature that not many devices have. Most devices use a 3 or 5 clicks, on or off style setup only. The Cool Fire IV also has this, but for extra safety, the on/off switch on the bottom of the device ensures no power is present to the device. The only issue I found with the on/off switch is that the device reverts back to voltage mode when you turn it on. If you just use the fire/power button, your settings are saved when you turn it back on. The round section that has the iTaste logo on it is just styling, it’s not a cover for the battery compartment. The 2000mah battery is internal and is not replaceable. 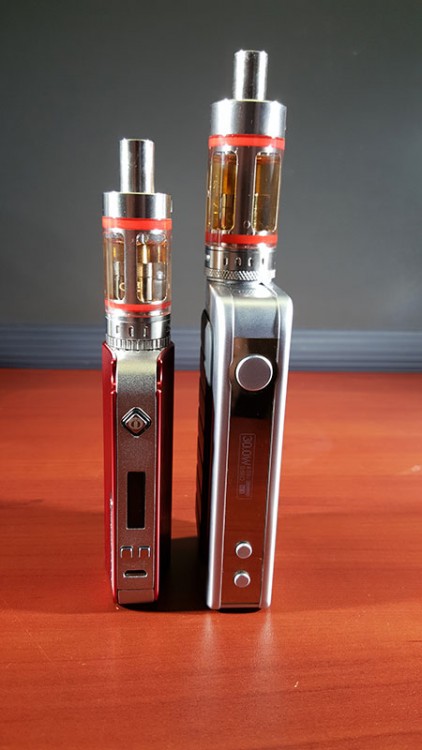 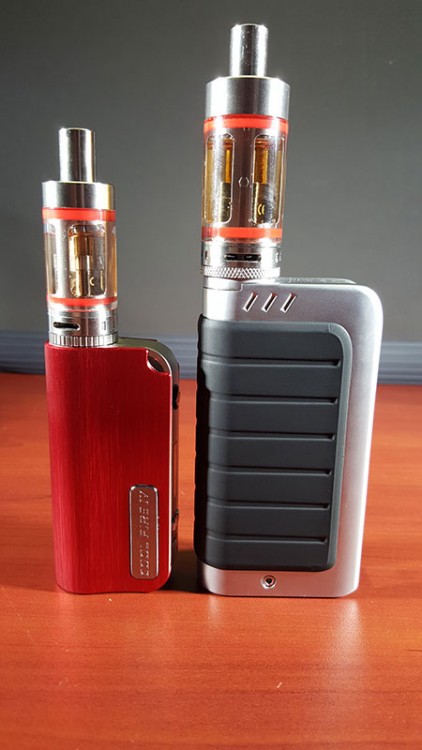 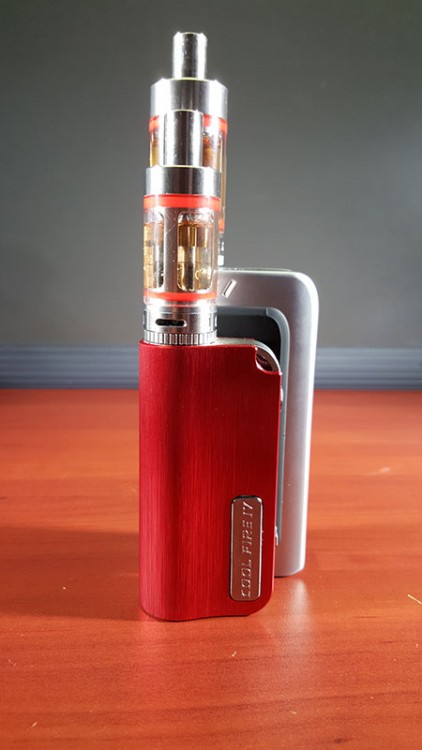 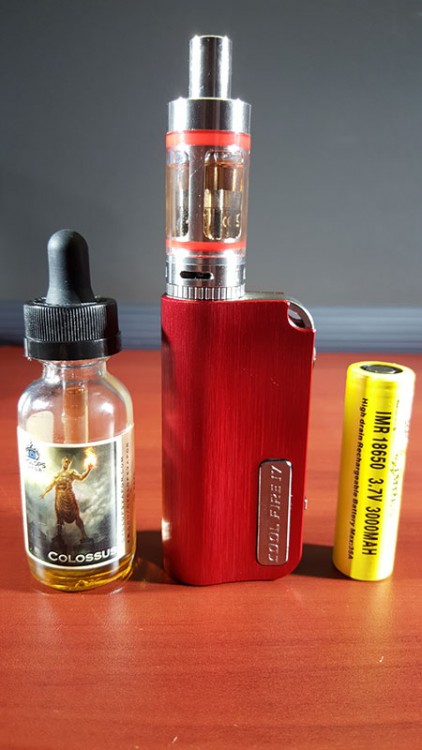 The Cool Fire IV doesn’t have a replaceable battery, but here’s how it stacks up against a standard 18650 battery and a 30 ml bottle of e-liquid.

The Innokin Cool Fire IV has a very simplistic interface. It works in voltage or wattage mode and doesn’t have much extra frill to mess with, aside from the puff counter. 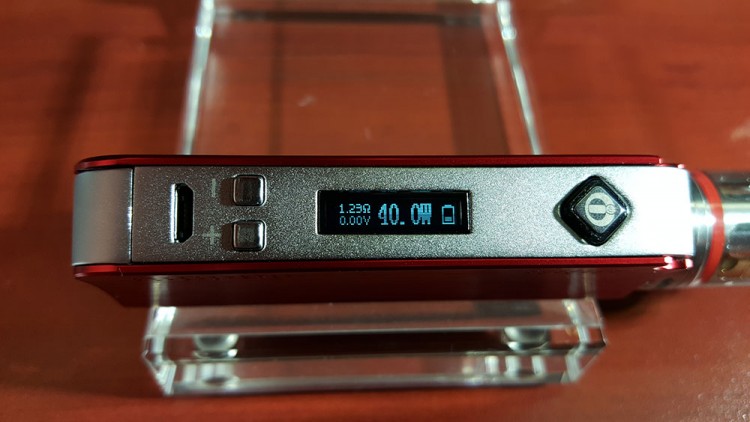 In wattage mode, the Cool Fire 4 works from 6 watts all the way up to 40 watts. When you scroll through the wattage and you hit the lower or upper limit, it round robins. The display is very simple and shows the residence of the coil, the voltage that the device is firing out when you fire it, the wattage (or voltage in voltage mode), and the battery life. 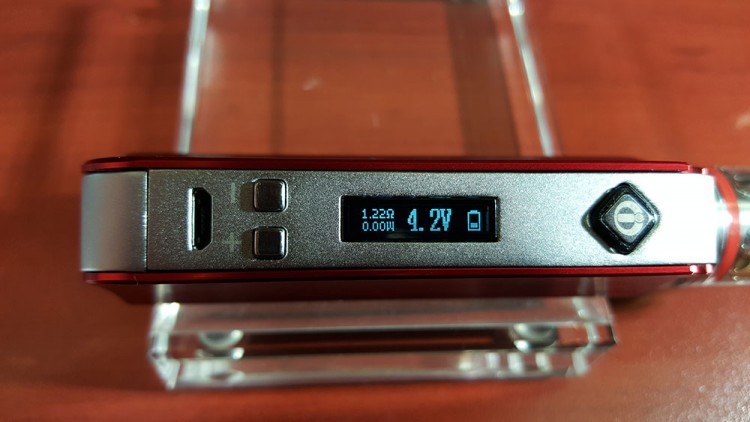 Here’s what it looks like in voltage mode. I use the Cool Fire IV in voltage mode with tanks since I normally set my wattage to match 4.2 volts anyhow. Instead of showing the voltage when you fire it, in voltage mode, it shows how many watts it fires at in the bottom left of the display.

I ran mostly Kanger Subtanks on the Cool Fire during my testing. I used 1.2 ohm and 0.5 ohm coils. They all performed well and I had zero issues with firing anything I put on top of the Cool Fire IV. 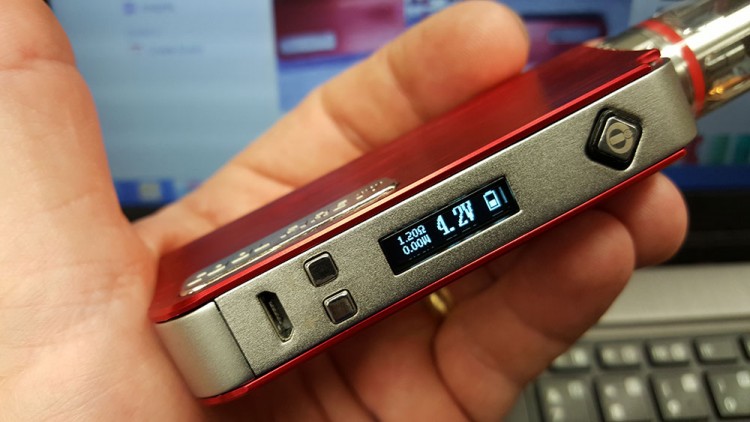 The 2000 mah internal battery performs quite nicely. I only did battery tests with a Kanger SubTank Mini with a 1.2 ohm coil. I ran it at 4.2 watts and with the 1.2 ohm coil, it was firing at 14.5 to 15 watts. I used the Cool Fire IV exclusively for battery tests three days in a row. I started each day after a full charge.

During the hours indicated, I vaped constantly. I am rarely somewhere I can’t vape. I filled the Subtank Mini 2-3 times during the tested hours.

Even though we have a battery indicator on the display, the Cool Fire uses the old school backlit LED behind the power/fire button to give you a visual indication of the battery’s level.

Another great feature of the Cool Fire IV is Over-Discharge Protection. The Coolfire 4 monitors the battery voltage and will automatically power off if the battery is over-discharged.

The $40 price is just about right, but I think that it has come to market a little too late. It’s just been released and there are other devices coming out that trump it’s value. I still think it should do well since the price is on par with the 50-watt iSticks and I think they look much nicer. Compared to similarly priced devices that range from 40 to 60 watts, it feels much nicer in my hands. The styling is nicer than the Kangertech Subox that was also released recently and the iStick devices. For the price, it should contend well if your local vape shop decides to carry them.

If you’ve read this review word for word, you may have noticed that I am a little cynical about Innokin. Despite my disappointment in Innokin over the last 9 months, I really love this device. I honestly feel that Innokin has lost customer loyalty and even worse, the loyalty of vape shop owners. I know shop owners that won’t even stock Innokin products now. That said, Innokin has to regain that loyalty and fast. I do have faith that they can do it too. With devices like the Cool Fire IV, they can get their products into the newer vapers hands again. The days of many new vapers buying an MVP 2 or a VV3 are over.

The Innokin Cool Fire IV is a great entry-level device. The price point puts it in the position to compete with other lower end boxes out today. If I had a choice between an iStick 30 or 50, a KangerTech Subox, or a Cool Fire IV, I am grabbing the Cool Fire IV in red every time. I would use the Kanger Subtank on it though. I am not a fan of Innokin tanks at all.

I am not the only person that really liked the Cool Fire IV. My 22-year-old daughter loved so much that she has not returned it. She’s also using it with a Kanger SubTank Mini.

Source: I purchased the Innokin Cool Fire IV from Nimbus Vapors in Demopolis, Alabama. You can purchase online at many retailers online. I haven’t seen them for sale in many Brick and Mortar shops yet.

What Needs Improvement: For the price of this device, I can’t really find anything that needs improvement. I guess I could ask for it to have a little more battery and a few more watts.