Jet.com wants very badly to beat Amazon. That’s been the bulk of their marketing push heading up to today’s launch, and when you shop around on the site, they consistently try to show you Amazon’s price versus theirs. After cross-shopping for a few minutes though, I was deeply unimpressed — both on price and ease of use.

Here’s the thing about Jet: they’re aiming for Amazon but their other competition is warehouse clubs like Costco and BJ’s. You pay $50/year to use Jet, just like a warehouse club, and you can buy in bulk. Jet has a video to explain how they work:

Sounds great, right? But, remember, you’ll need to save enough to get over that initial $50 membership hump, plus if you don’t buy at least $35 worth of stuff, you’ll have to pay for shipping too. And unlike Amazon (or going to your local warehouse store), you can’t buy many perishables on Jet. Still, we do buy many dry goods from Amazon and Costco, so I decided to do some cross shopping and see what I could find as far as convenience. 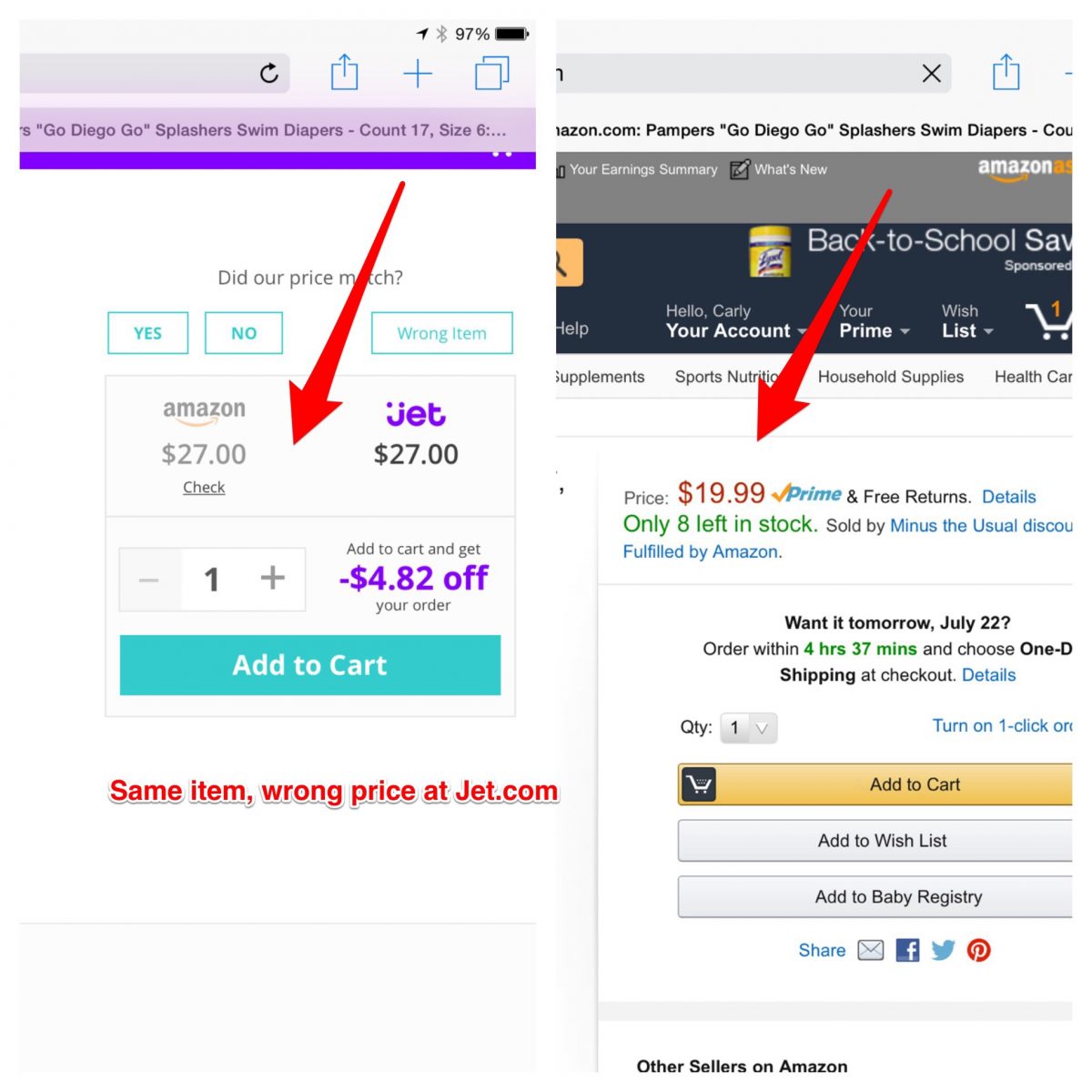 Diapers: This is a big one for us. We use a mix of diapers in our house, but keep some disposable Pampers on hand, as well as disposable swim diapers and overnight diapers. Jet does have Pampers Cruisers for slightly cheaper than anyone else, at $29.28 for 108, or $0.27/diaper. However, they don’t carry our usual brand of overnight diapers, and their swim diapers are more expensive than Amazon.

Dog food: Costco doesn’t carry our usual dog food brand, and Amazon doesn’t offer it through Prime, so we usually buy from Petsmart. They have the Blue Buffalo Basics Limited Ingredient Formula 24 pound bag for $53-$57 depending on the exact flavor. Jet.com has the same food for $61.98, but with their mysterious pricing adjustments they bring it down to $57.32. So I can order the dog’s food and wait a few days to get it for the same price as buying from the store I pass on my way home from work. It’s hardly much of a saving, especially when you add in the Jet.com membership cost. 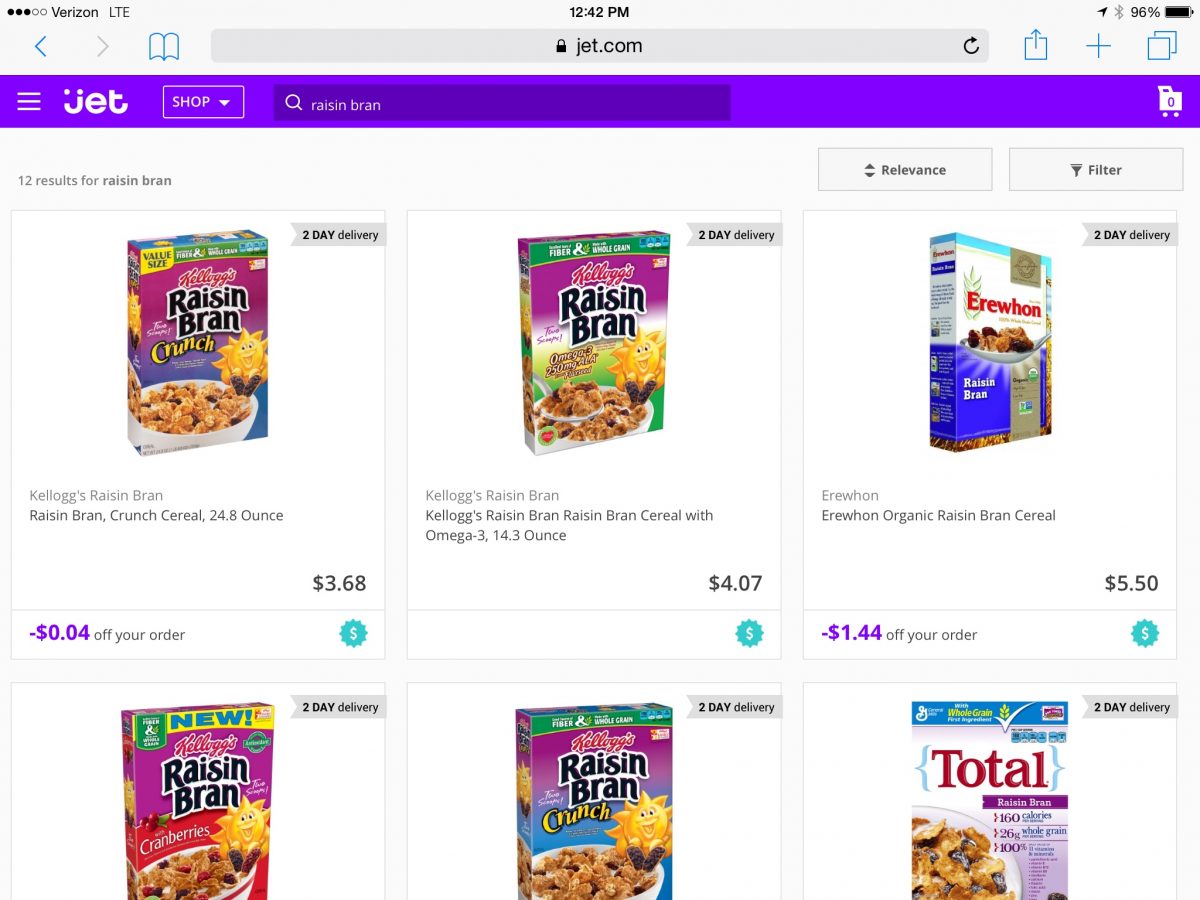 Cereal: I really like Raisin Bran (don’t judge me), and we usually get the 2-pack from Costco. I’m honestly blanking on how much it costs us, but I feel like it’s cheaper than Jet.com’s $11.56 for the same 2-pack. Also, Jet’s algorithm is terrible; I searched for “Raisin Bran” and plain Raisin Bran was the 10th option, behind several variations on Raisin Bran and a handful of non-Raisin Bran cereals.

At that point, I just gave up entirely. Jet.com was getting super complicated, because I had to buy more to get more savings, and it seemed like a bit of a tail-chasing venture. I could save more if I bought more, but I had to really work to find items, and even then the savings seemed minimal. On top of that, their “Amazon price” was wrong at one point by several dollars (Amazon has swim diapers for $19.99, but Jet.com thinks they are $27). If you’re going to price compare, at least compare correctly!!!

So let’s break this down for a moment, and compare Jet to both Amazon and Costco, the two companies that get the bulk of my online shopping/bulk buying business. Jet.com costs $50 per year once we get past their 3 month trial. That’s half of Amazon Prime, but Jet doesn’t offer music or streaming videos. So while Amazon costs more, arguably at least some of that cost is for the Prime media portfolio as well. Jet offers all sorts of products from different categories, just like Amazon, but unlike Amazon there’s no way to sort by bestsellers or customer reviews. Even items where a bestseller list could be pulled from a third-party, like in books, there’s no organization or listing. So from a navigation standpoint, Jet feels an awful lot like pawing through the bargain bin at your local grocery store — there’s a great deal in there somewhere, but it’s up to you to find it.

Now, Costco is a closer comparison to Jet. Both cost $50/year, and both intend to knock down your costs by selling you items in bulk. However, it doesn’t seem like Jet is any cheaper than my local Costco for most bulk items, and we actually use Costco quite often for their perishables like eggs, meat, and fruit. Again, I can’t see us ditching Costco for Jet, especially because Costco is much clearer in their pricing. If Jet were significantly cheaper AND offered free shipping at all prices, it might be worth looking more closely at how much we’re saving at Costco versus Jet. But if I have to spend at least $35 to get free shipping, AND the prices are constantly rolling all over the place depending on how much I spend, it makes the whole process way more complex than it needs to be for the price.

Clearly, I’m not the target audience for Jet.com. I prefer simplicity in my online shopping, where it’s quite clear what I’m buying, when it will arrive, and how much it will cost from the second I click “Add to cart”. I could almost forgive the strangeness of the pricing model if the site was well designed and easy to use, but if I can’t even find what I want in a simple search, or cleanly browse the categories, then it’s just not worth my time, let alone $50/year. Jet was in beta for quite some time before it launched, and I think it could have used a few more months of polishing. Hopefully they get these kinks out before they start charging people a membership fee, or the only “jet” anyone will see is people running from an overly complicated concept.