I’ve been on the hunt for a GOOD bunch of third-party bands for the Apple Watch for a while now. When I originally purchased the Apple Watch Sport, I knew I wanted the Space Grey and the black Sports band due to the fact I work out six times a week.

But I needed a band, or bands that I could wear in different scenarios. And I finally think I found a good set for all occasions.

So when I was sent over a few of Monowear’s Apple Watch third-party bands to test out, I was kind of on the fence. I’ve seen a bunch of unboxings and reviews of other third-party bands online and to be honest, a few of the company’s bands I’ve seen have been terrible. The colors on their sites aren’t what they appear to be when you actually seen them in real life photos on someone’s wrist so I’ve been a bit cautious when it comes to that. 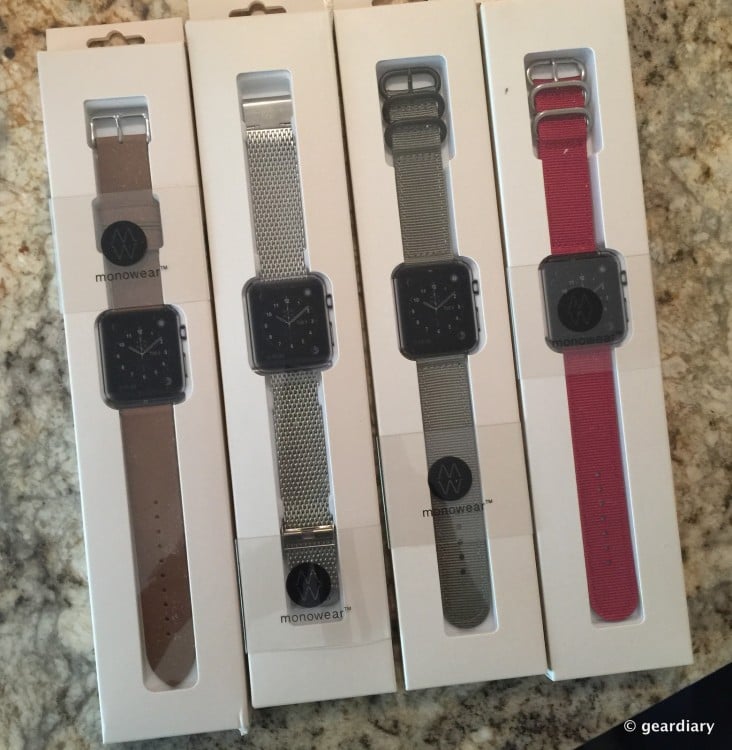 When picking out the bands to review, I had to take in mind the following: The Space Grey color option I chose isn’t the most popular of the Apple Watch selections. A lot more people have the silver, more pricier options, so a lot of Monowear’s bands are geared towards those. I did however make a good choice in picking the 42mm as all of Monowear’s bands look beautiful with this size to me, even online.

I received two Nylon bands, one grey (with black accents), one red (with chrome accents). I also received a brown leather band sporting chrome accents, and a chrome mesh metal which seems to be the most popular band of theirs as it’s currently sold out online. 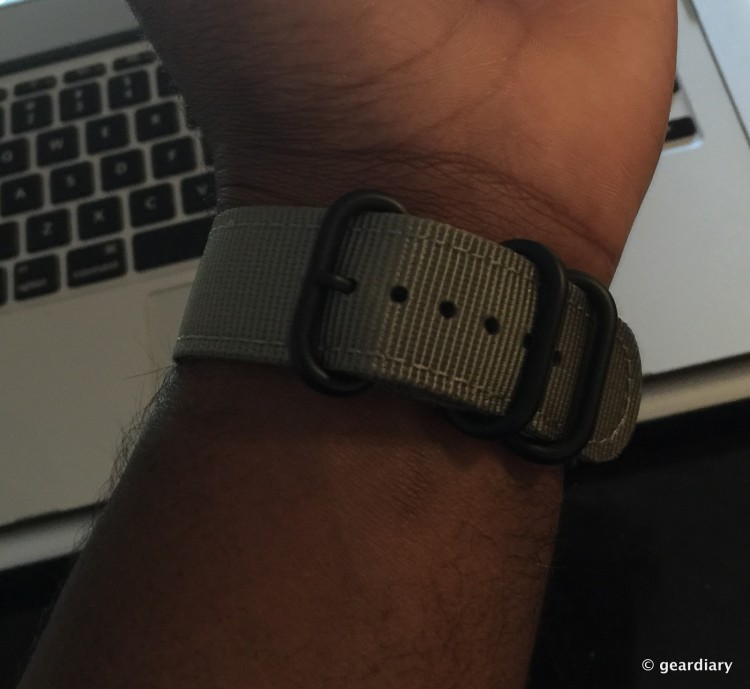 One thing about the Monowear bands are they do not cost an arm and a leg to purchase. With the Nylon bands costing $59.99, and the leather setting you back only $79.99, these are hands down better than any that I’ve seen from the competition, with some leather ones being around $169 for a leather band. 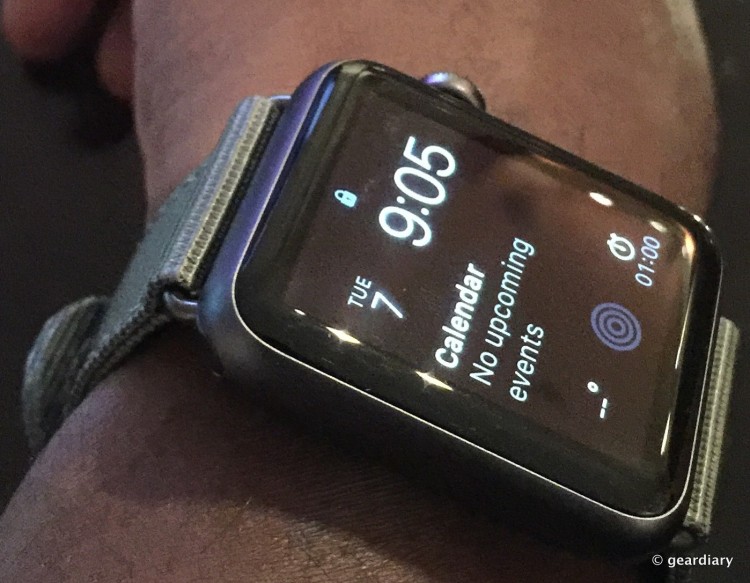 The nylon bands that I received were pretty nice. I will say that they do take some getting used to coming from the Sports band. Straight out of the box they are pretty stiff which mean they will hold up over time. Inserting them into the Apple Watch slot was a bit harder than it was for Apple’s official bands, but once I got the hang of it, they are easy to install and remove. The red one that I received, I wish it came with black accented loops so it would match my watch itself. 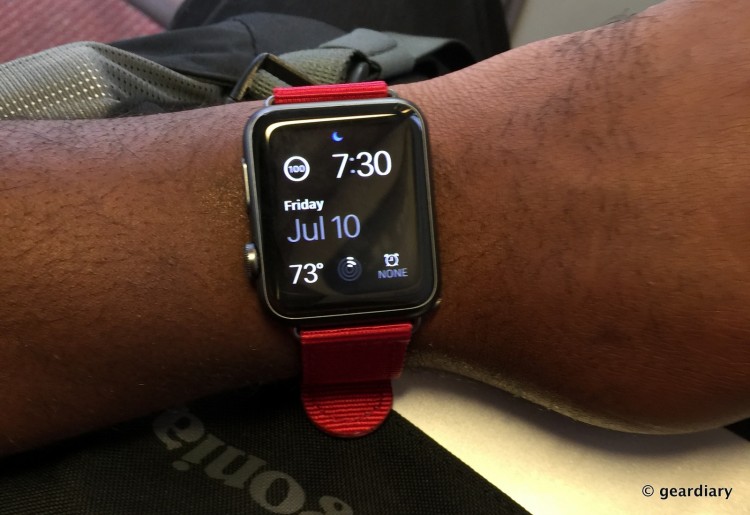 The band itself is nice fitting on my wrist and the loops themselves move in a downward position so they won’t ruin positioning of your wrist on say a keyboard stand or a desk/table. The grey option that I have is a bit more low-key and something I would wear out casually. The red is something I’ve found myself wearing to Nats games, and I get a lot of questions about it. 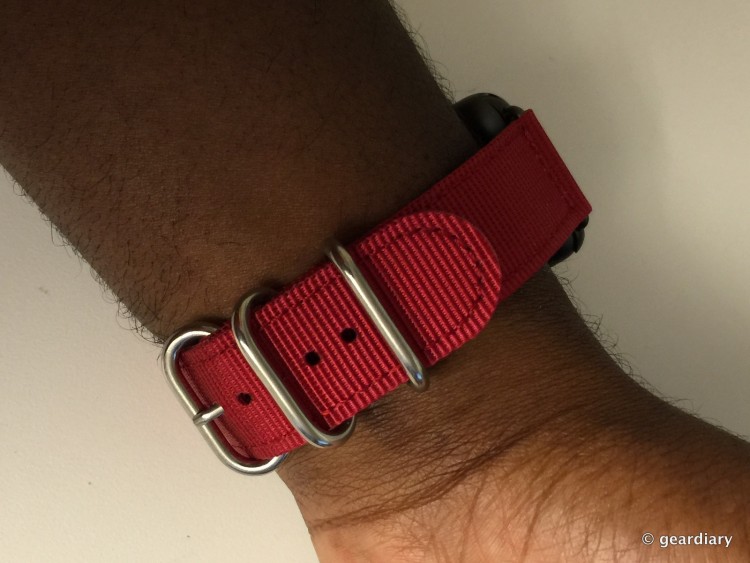 The chrome mesh band was one that I really had to learn to love. I must admit, seeing Apple’s Milanese band, I wanted it. But I absolutely refuse to pay almost $650 to get myself one, and Monowear’s looks pretty similar with the mesh. My main issue with the mesh from Monowear was the clasp. Although it was absolutely beautiful and looks awesome on my wrist, I wasn’t a fan of the clasp system and wanted something to the like of Apple’s with the clasp being on the outer band, instead of being under your wrist. Reason being is without much effort, removing the mesh band the first couple tries is virtually impossible. 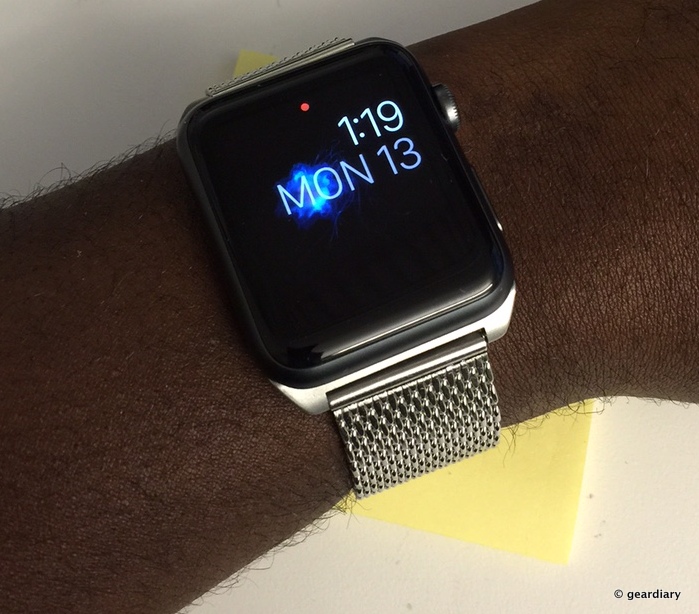 I found myself watching a tutorial to figure out how to do it without actually breaking the band, that or cutting off my wrist. Also it’s too soon to say if the Mesh band will discolor or if it’s susceptible to scratches, but it does hold up pretty well. I still use this band when I go out to dinners at work, and on more casual affairs like conventions. The only thing I would change is possibly creating a black version for those who don’t have the silver Apple Watch. 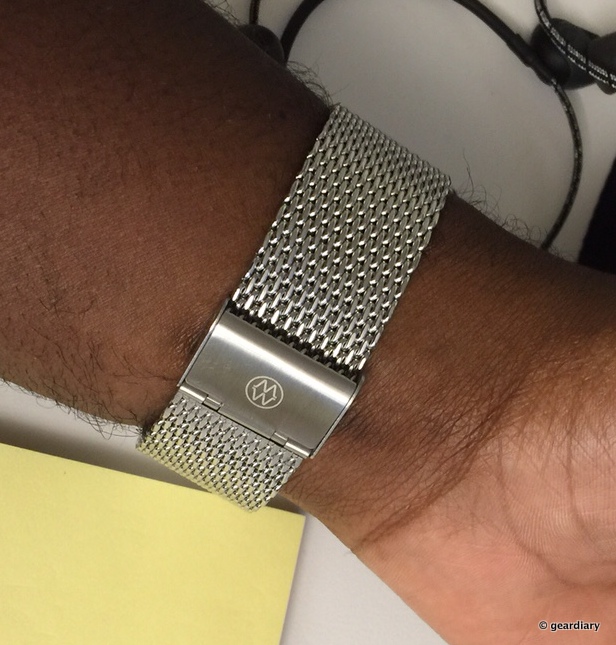 Lastly there is the Leather Band. Admittedly, when I first picked the leather band, I wanted a Brown band due to the fact the Space Grey would offset the look and it would be beautiful to wear to work versus wearing a black sports band. When I received the brown leather, I was a bit disappointed knowing that the brown wasn’t as “brown” as it showed online.

On Monowear’s site you’ll see they have two versions of their band that could be misinterpreted if chosen wrong. Leather- Brown, and Leather-Crème. However the leather brown version that I managed to receive seemed to be more of a wine cork brown that even though still beautiful on my wrist, wasn’t the brown I was going for. But maybe that was a good thing? 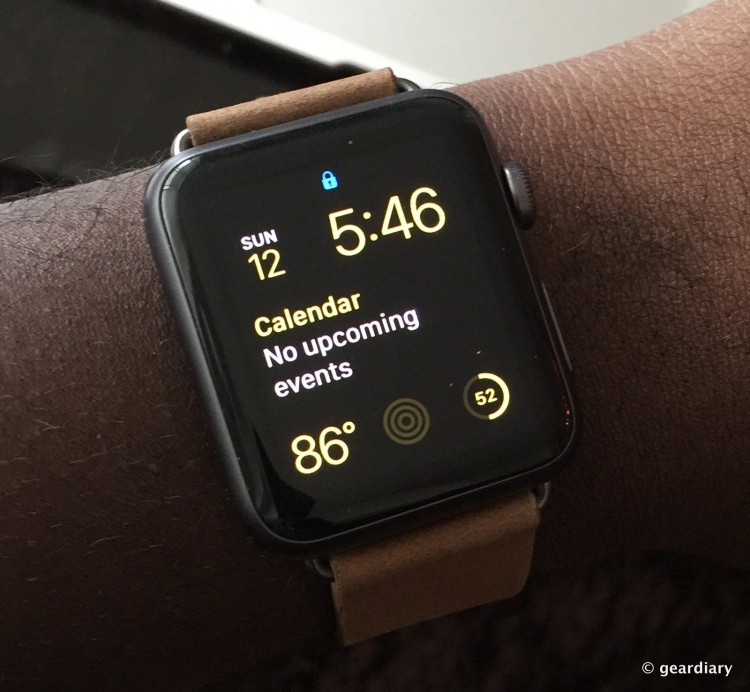 In the end, Monowear has gotten it right in terms of the overall premise of quality Apple Watch bands that are well polished, fit to form, and have a build quality that even though I haven’t worn them for months, look as if they will hold up for quite a while. I’d personally like to test out their metal bands which are sold out right now (costing from $89 to $119), but I’ve been told by a representative at Monowear they are doing their best to push out all of their orders as they come, starting with the original Kickstarter backers.

What I Like: The bands themselves are very sturdy, especially the mesh to the point you know they are secure on the wrist

What Needs Improvement: Possibly an option online for either black or chrome loops for the Nylon & leather bands for all bands