Over the past month, I’ve been doing a ton of traveling, and with that came the need to keep my clothing clean. Luckily I had a super portable wash bag that I could use to quickly wash the smaller things in my bag that needed to be cleaned.

Enter the Scrubba, a wash bag that was sure to eliminate me having to hand wash my gym shorts and shirt, as well as a few other clothes while on these trips. And sometimes you aren’t in a location that allows you to just throw your clothes in a washer machine. 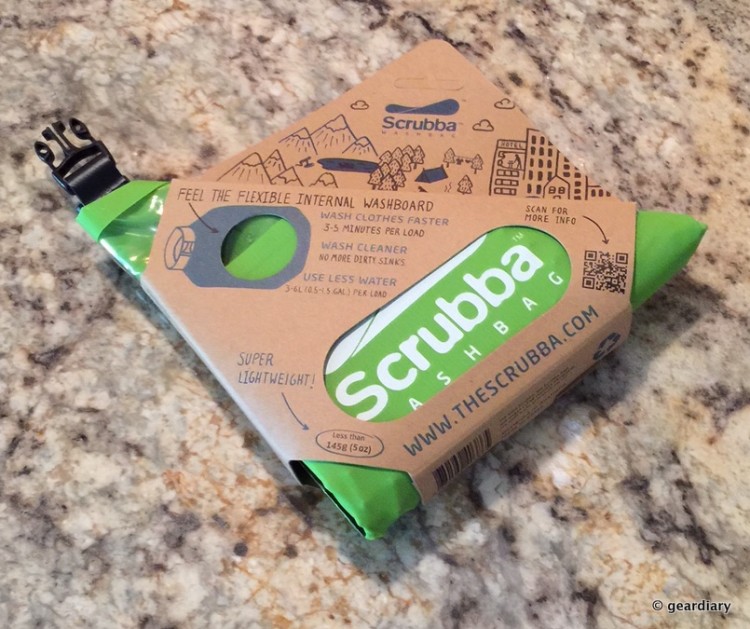 I’m very frugal with my money, and I try to eliminate the need to waste water washing a less than full load of clothes, regardless of where I am, but the fact remained that laundry needed to be cleaned. The Scrubba was pretty much self-explanatory with a simple six step strategy labeled on its box, as well as its bag (so there’s no real reason to screw things up … but we’ll get to that later.) 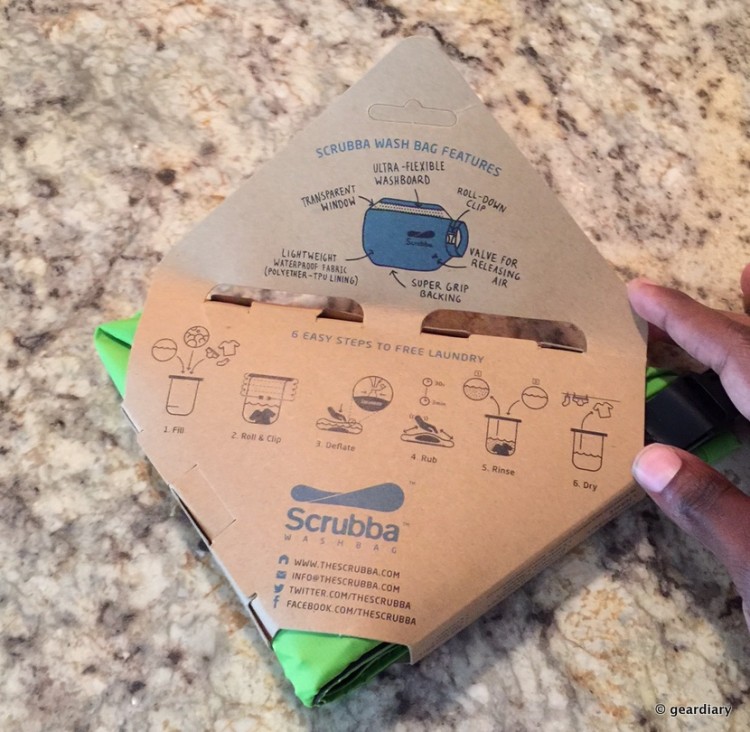 Instructions on the box. So easy even a caveman …

The Scrubba is a small green bag is large enough to throw in about a day or two of clothes to quickly clean. I’ve heard that other people have done more, even with sheets, but to be completely honest, I think they are just hyping it up quite a bit. I threw in two pairs of shorts, a t-shirt, pair of compression shorts, and running socks for good measure.

When you first open up the Scrubba you are told to fill it with water, detergent, and your clothes. I followed these instructions, using Arm & Hammer’s detergent (since it was on sale this week and actually smelled pretty decent, why not?) Scrubba was even so nice as to include indicators on the bag above the step by step instructions to tell you where to fill water to. That’s where things got a bit tricky for me. 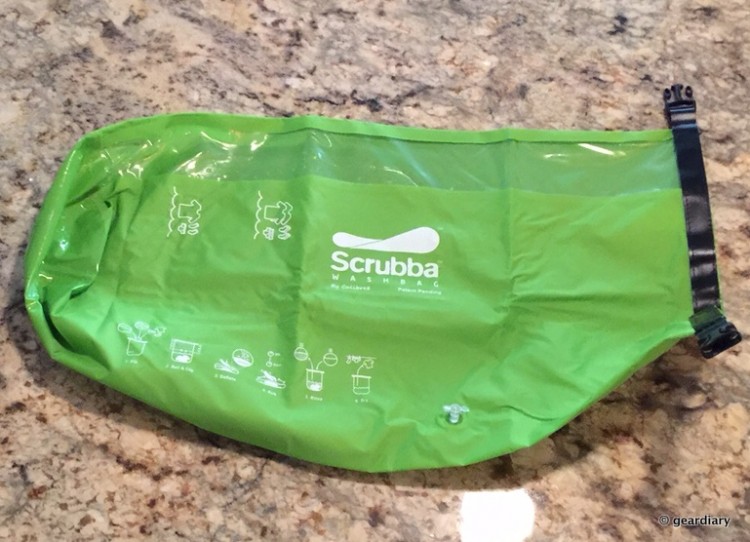 After you fill the Scrubba, you end up with a bag filled with water that you must roll down about five times and clip the included clip together. Simple, no? 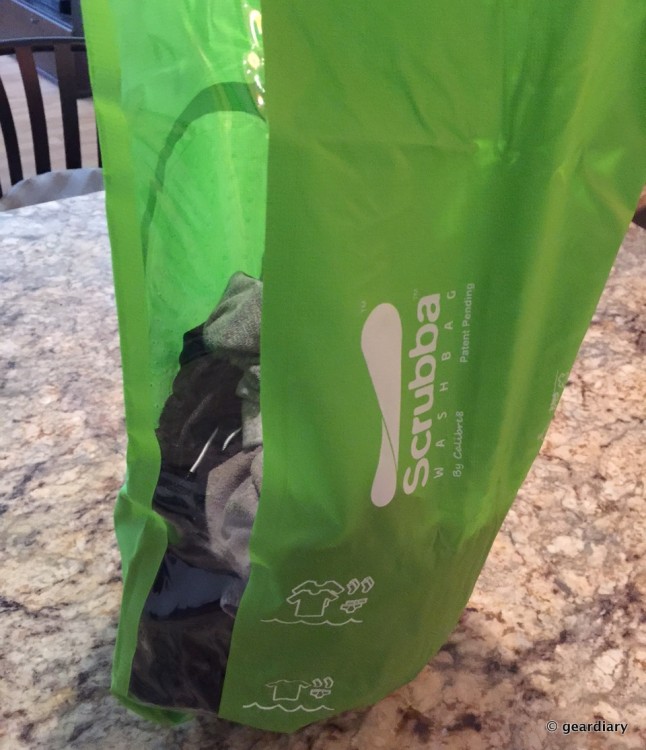 Notice my “load” doesn’t consist of a lot of clothes.

Well after this you are instructed to use the squeeze valve to deflate the air inside the bag. While I did everything to this point, as I’m deflating the air, some water itself came up. Granted, I was laying the Scrubba on a flat surface, with the Scrubba emblem facing up (as the bottom of the bag had the grooves you’ll need to actually “clean” your items. However once actually squeezing the valve, only SOME air came out, however my countertop did end up with water on it. Then flipping the bag over, there was water all over the back of the bag. Had I done something wrong? The valve had no water coming out. And I was CERTAIN I just rolled up the bag as instructed. WHERE is the water coming from? 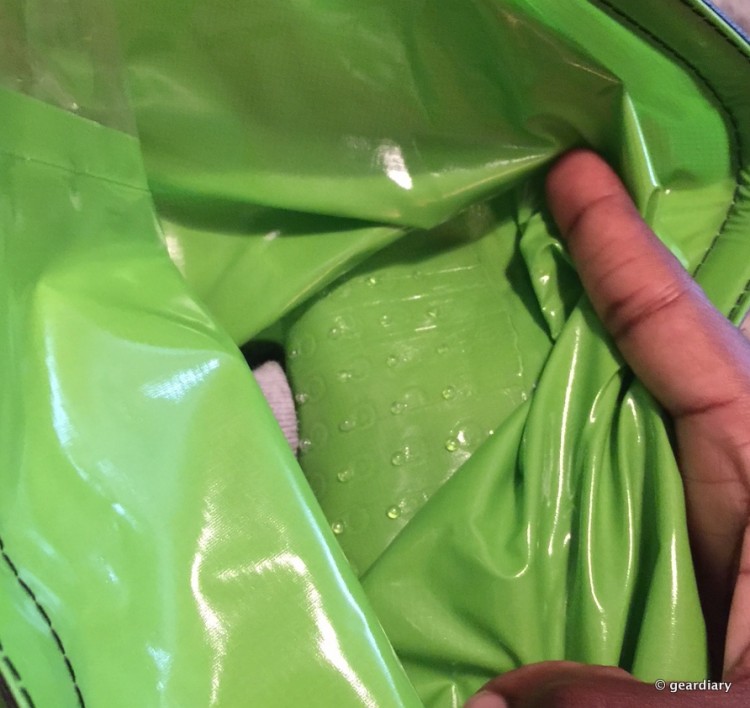 On the inside of the bag are included little probes to “rub against clothing.

At this stage, I tried to just clean up said water and continue the process just in case I was the person who failed. After rubbing the bag vigorously for about three minutes (30 seconds is considered good enough for a quick wash, but “washer machine quality is 180 seconds.) 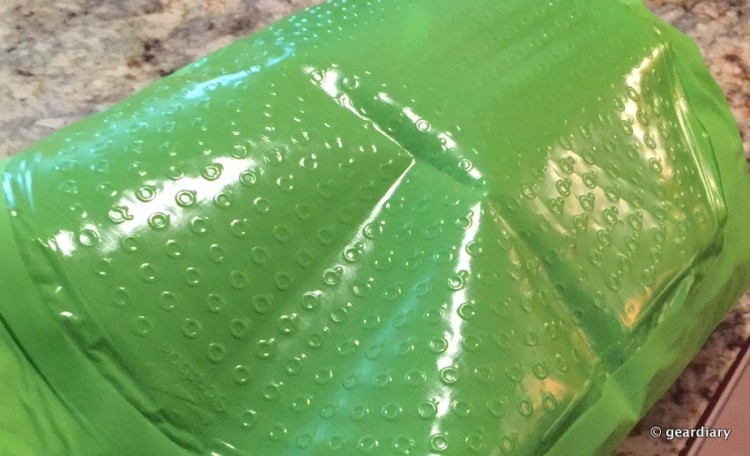 After you do this, you’re supposed to rinse the clothes with clean water, ring them out, then hang them to dry. Pretty simple process. For me though, I’m forever the skeptic. If you are a traveler or hiker who just needs to be assured that your clothing “smells” clean, and the only piece of mind you need is that a day of sweaty clothes may appear clean, this is your bag.

Mine however, after drying the clothes, sure, they smelled great, after being shaken up in a bag with dish detergent, but there’s no guarantee that your clothes have actually been through enough of a wash to be “clean”. Which is more than evident with white clothes such as my t-shirt that was used. I did not use bleach in the bag for obvious reasons, but the white shirt I washed “smelled” clean, but didn’t give off the impression it was “fresh” for lack of better words. 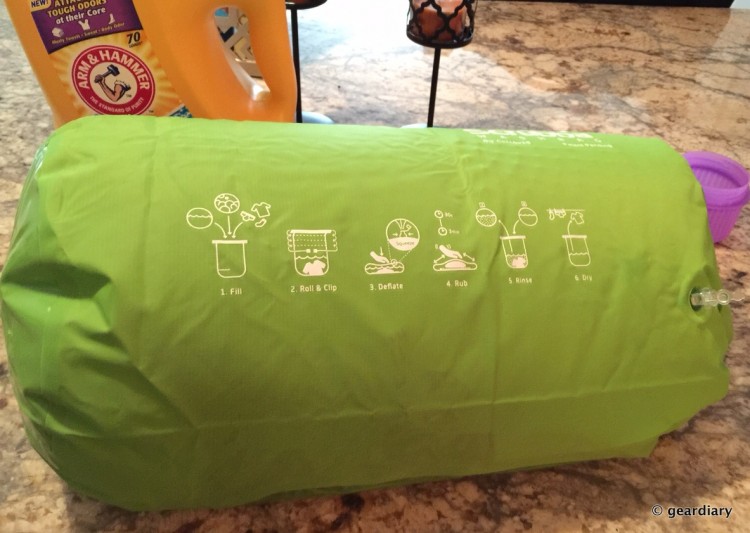 This is what the bag looked like with the listed clothes and the amount of said water inside.

Overall, at $65, this washbag is nice if you’d like piece of mind that your smelly gym shorts no longer smell horrible (guilty), and if you don’t mind the additional labor you’ll have to use in order to get a “proper” wash out of the bag, the Scrubba is certainly a good thing to throw in your bag for a long trip, such as a hiking trip or even a cruise ship, where they charge you an arm and a leg to get just a few things clean.

You can get a Scrubba here.

What I like: The size of the bag was pretty nice at six ounces, and the step by step procedure is better than most “washbags” on the market.

What Needs Improvement: The “air valve” should be a bit larger as it seems not enough air came out of the bag itself.