Personally, I’ve never been a big fan of “wallet cases” for cell phones because of the fear of your credit cards being exposed while on a call, so when Bellroy sent me their Phone Pocket Plus Case, I was ready.

When you usually think of wallets that men carry, majority of them are brown or black, and they all look pretty dull. Bellroy’s Element Phone Pocket Plus available in Black, Slate Gray, or Cognac are certainly not cheap at $119.95, so when I received the Cognac color (personally picked out), I was actually happy I did not go the traditional way or black. 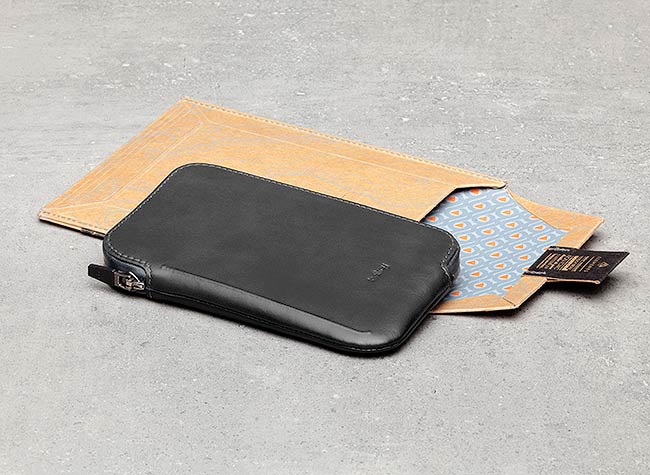 The Bellroy items is designed to fit a large smartphone, which I tested with my iPhone 6 Plus, both with and without a case. The entire premise of the Elements Pocket Plus is to eliminate the need for a case, but I’m never one to go without one, so I opted to use a silicone case on my device and then slipping it into the case. This method still worked significantly well as it only added minimal bulk without warping the leather of the wallet itself. 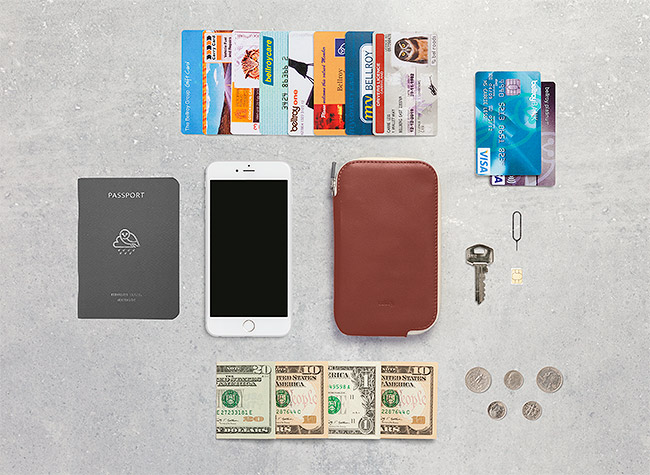 Designed to hold the phone, about ten cards and a key, Bellroy was nice enough to store an additional SIM card if you are the type to carry one around. I personally used this slot to house my MicroSD card for the Nokia Lumia 1520 I keep in my bag. To me ten cards seemed to be much to carry, but for you guys who have a host of credit cards, be content to know there are enough slots to house them all. I know I’m not the only person in the world who’s attempted to stuff that CVS card, as well as other cards you might never use in your standard flip-style wallet that end up giving you that bulge in the front of your pants. 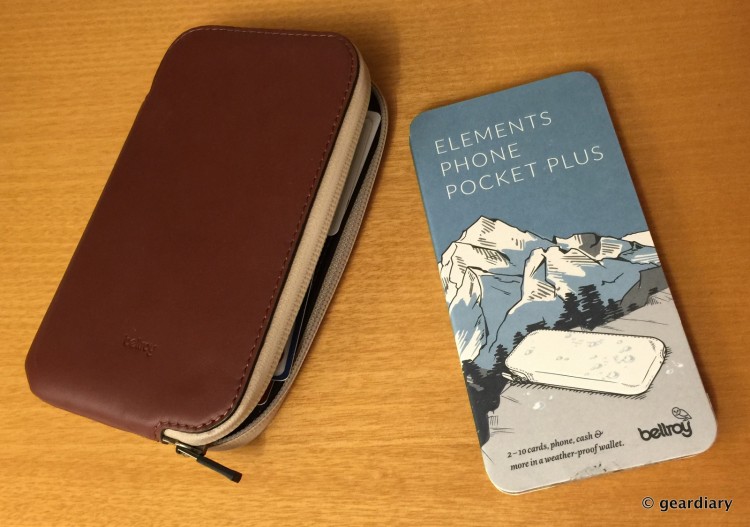 I settled with six cards, three on each side and my phone and everything fit perfectly. The material on the inside of the Bellroy Pocket Plus is nice and soft so being able to lay my naked screen inside was great, and I wasn’t concerned about my device’s screen being compromised as a result. 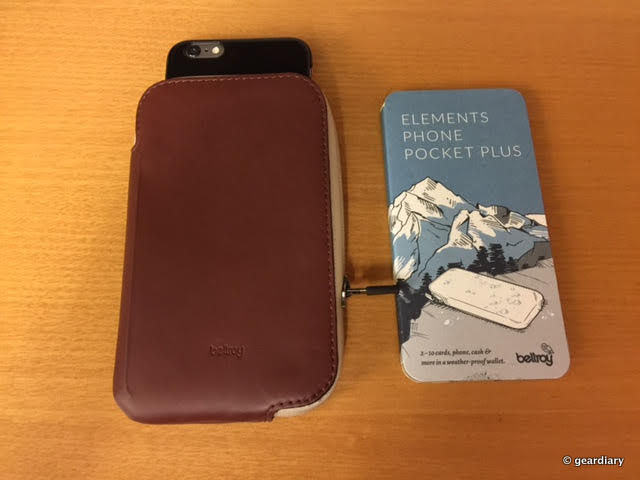 A major problem I have with most wallets is overall longevity in the quality of the leather. Bellroy made sure to make the leather weatherproof, so if you pull it out in the rain, you don’t have to worry about it damaging it at all, and with Bellroy’s water-resistant zip, the elements won’t ever be a factor. I was comfortable sitting my wallet with my phone inside of it beside me at the pool with no worries over the weekend. If you’re overly concerned that the wallet isn’t durable, it comes with a three-year warranty that Bellroy stands by. 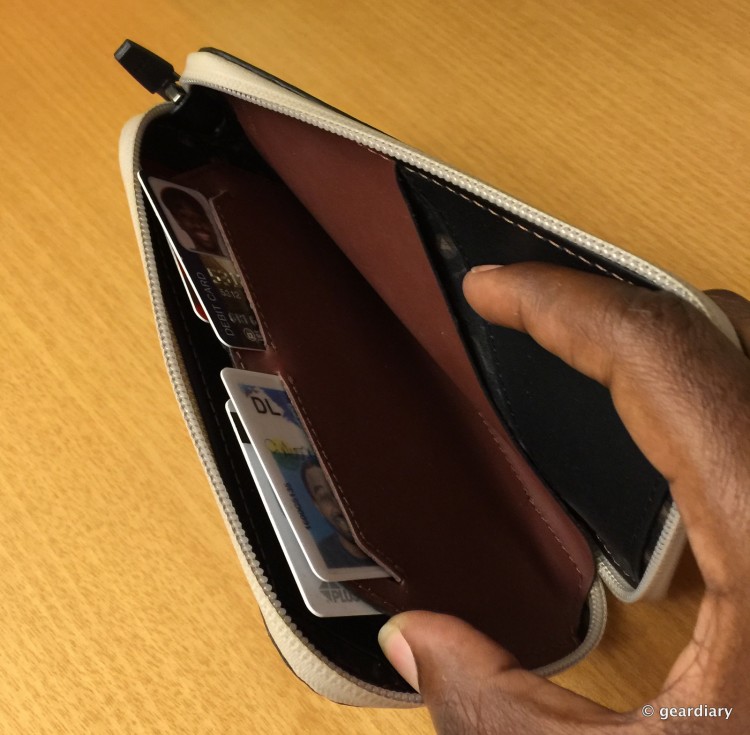 The inside of the Element’s wallet is spacious, and can fit any standard 5″ +phone.

A lot of people hate zipper cases because when you have to take the wallet out in a pinch, the process isn’t necessarily seamless. Pulling out your wallet, to open it and grab your phone might seem like an extra step, but for folks who are going out casually  to say a dinner or even just out on the town and rather not be hassled with having one device in the left pocket and have your wallet in another. The case itself is about the width and length of an iPhone 6 Plus and Galaxy S6 Edge so fitting the pair (together) in your front pocket won’t be a problem at all. You might have a bit of trouble if you have it in your back pocket if you have skinny jeans, however. 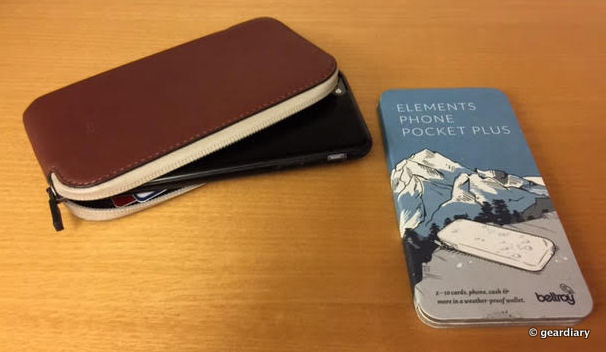 My iPhone 6 Plus inside of the Bellroy Element Pocket Plus

Overall, I think the Elements Pocket Plus is a great wallet that while it may not be everyone’s cup of tea as a daily wallet, this is great for commuting, and even better for holding random things if you chose not to throw your phone in it. A lot of people go with the traditional black because as it wears over time it will still hold up, and it typically does. 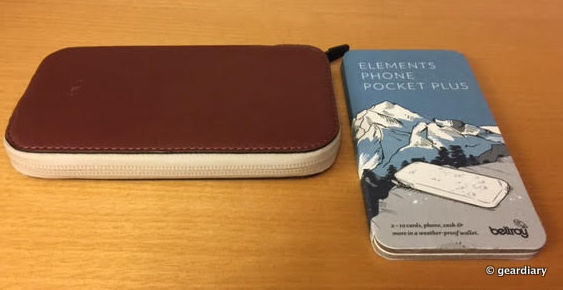 What the casing looks like with 8 cards, a microSD and an Iphone 6 Plus inside

I considered the Cognac colorway because even though the crème color aspect might fade over time, it will still have a beautiful “worn” look to it, which is what I was going for. This is certainly a “you get what you pay for” moment with this wallet, as $119.95 isn’t cheap, however, if you like to keep everything together to assure you didn’t lose those important cards, or your device, the Elements Phone Pocket Plus is great for all of those 5inch and over devices.

What I like: Leather is very sturdy and will hold up over time. Being able to have my money lay flat instead of accordion style is an additional bonus.

What Needs Improvements: Nothing