Thonet & Vander’s Ratsel are known for their beautifully constructed audio equipment, so imagine my surprise when I received their Ratsel Multimedia Speaker System to review!

When I first received the Ratsel at my door, I was too excited. I remember back in high school I picked up a cheap stereo system on Black Friday for about $65 that had the same concept as the Ratsel, and most other options on the market, but Ratsel just took that nostalgia and amped it up two or three times. 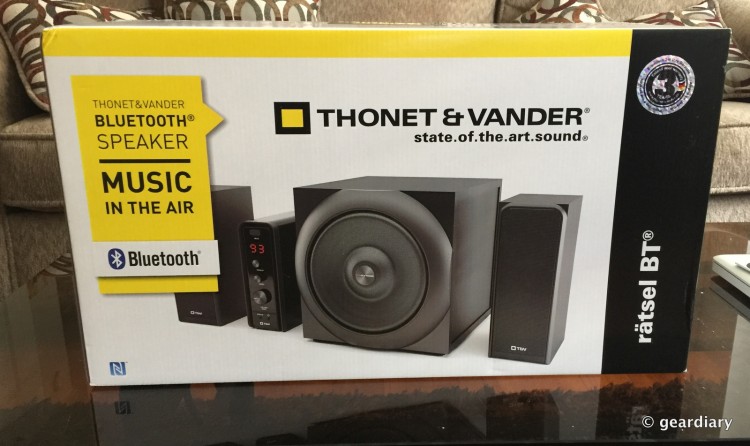 Here are the specs for the Ratsel by Thonet & Vander:

The self-powered speaker system comes with a standalone box that lets you control the volume, bass/treble, mute, and playback options which is great, but they included a remote which I figured I would use a hell of a lot more than physically adjusting it. 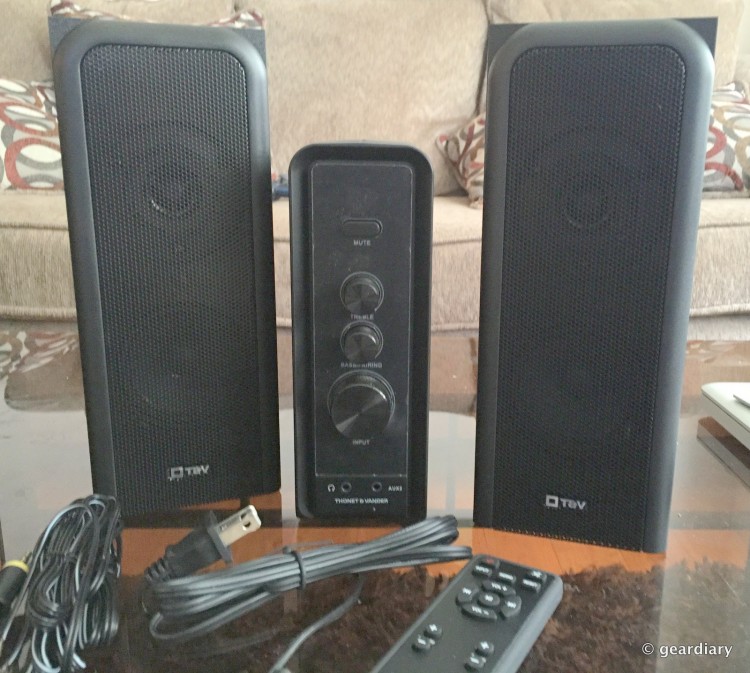 Included in the box itself with the panel are two speakers that both have an output of 18 watts for each. But the bread and butter here is the subwoofer, with the signature Hammer Bass technology that will easily fill a room. The subwoofer itself stands at 30 watts which for my apartment is more than enough. 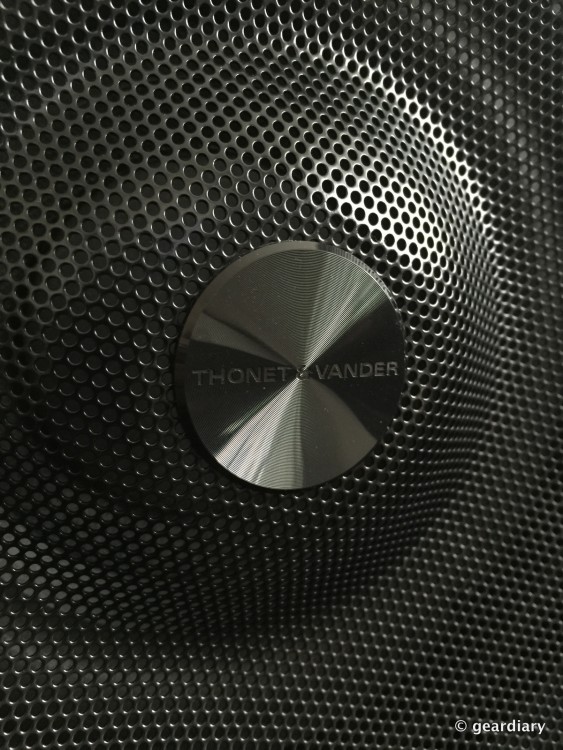 Obviously a speaker system like this is ideal for those of you who intend on watching movies, or even playing Madden on Xbox like I do. Having a black Vizio television I opted to sit each of the small speakers on opposite ends of the television and settled on sitting the subwoofer on my floor, which I’m sure pissed off a few neighbors with it’s sound quality. 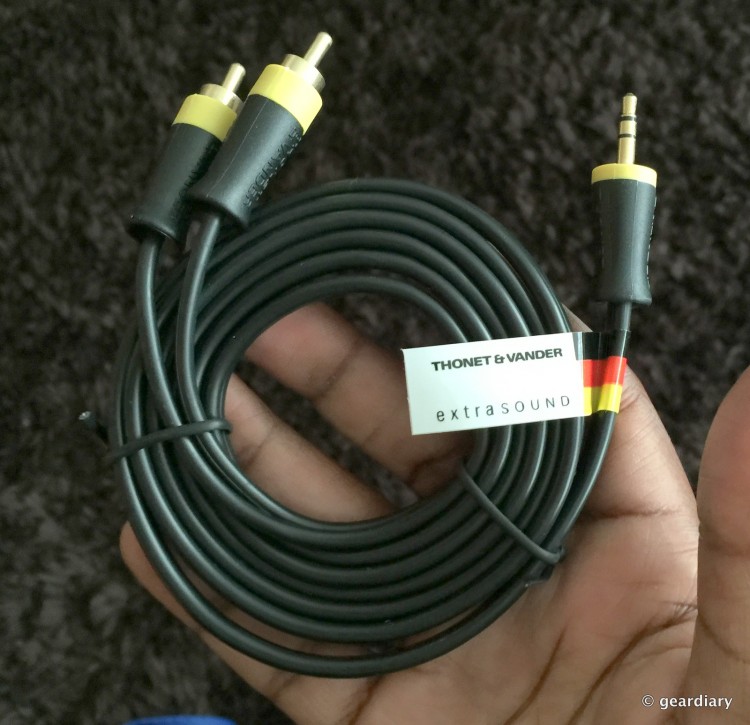 The ExtraSound cable that does as it says.

The first model I received however, didn’t work so Thonet & Vander had to send me another model to review because the woofer did not work regardless of how I attempted to set up the cording. The second set however worked without a hitch. 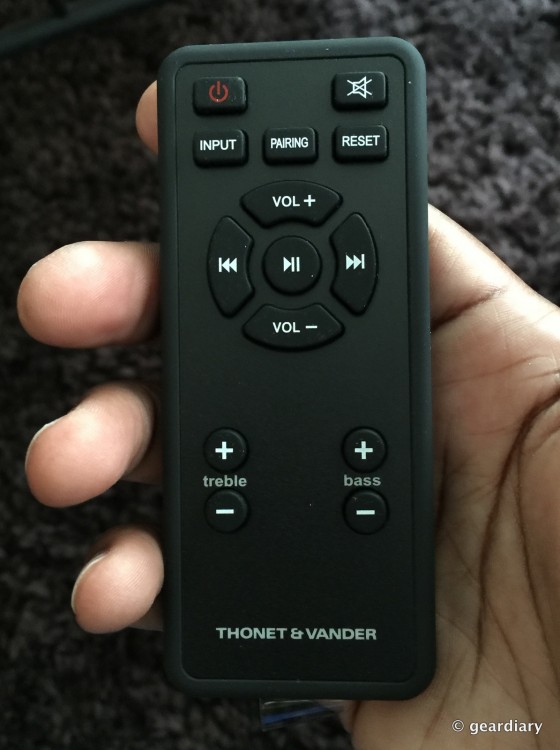 The included remote batteries will last you around a year.

Once I was set to go, I was happy to know that in the standalone box there was an included 3.5mm stereo input so if I wanted to connect my headphone to it as I played Call of Duty I could, although I prefer the actual intensity I get from the all-out surround sound. You can also connect the Ratsel to your smartphone or your computer which is great for that friend who refuses to connect to Bluetooth but wants to show off their playlist on Spotify. 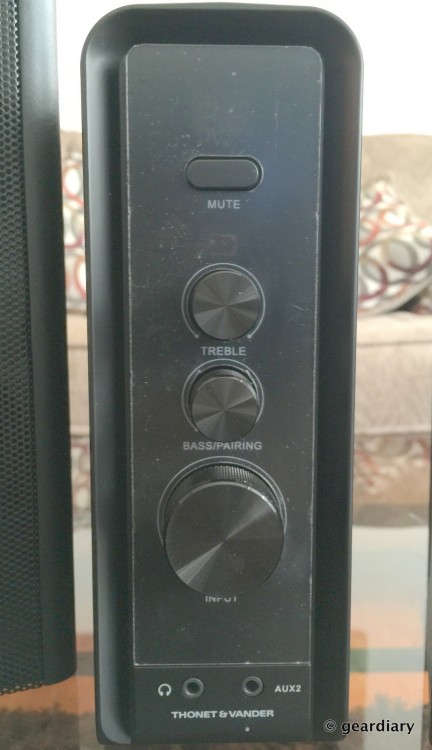 The audio quality itself though is good, especially at it’s price. I found the bass to be a bit lacking out of the speakers themselves, so I found myself having to account for that with the subwoofer (the version that ended up working).

Overall Thonet & Vander’s Ratsel is a bargain stereo system at $199, which does all of the basic things that you expect. It’s wooden make is perfect for a bookshelf, or for a living room that already has a large television. The inclusion of a 3.5mm port makes plugging up to listen to music from your laptop nice, although I always opt for the included Bluetooth option. They also included a one year warranty which is considerate in the event your speakers just happen to go out before that 365 period. If I could change one thing, it would need to be a bit more detailed about the cording in the instructions, because even though they laid out particular things for you, you’re left to assume the rest.

If you’d like to purchase the Ratsel by Thonet & Vander, you can head over to their site and pick it up for $199.

What I like: Wooden make; the bas/treble  control from the remote is great.

What Needs Improvement: Instruction manual could be a bit more detail in terms of cording.