Pebble is having a very busy year! They ran a record-breaking Kickstarter for the Pebble Time/Pebble Time Steel, and now they’ve surprised everyone by rolling out another new watch, the Pebble Time Round. Yes, a ROUND smartwatch, with the guts of a Pebble and the style of a normal watch! 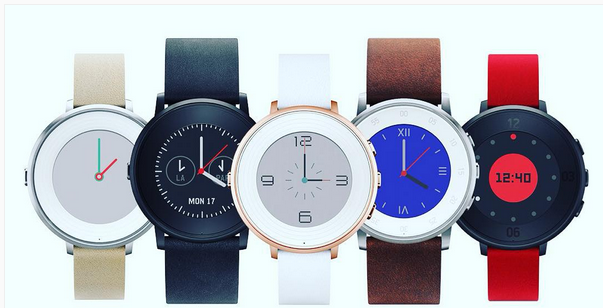 Pebble Time Round has a few things going for it that might just make it a huge hit. For starters, it comes in two band sizes, 14mm and 20mm, to fit both masculine and feminine styles. It’s a smaller physical watch as well, with a 38mm watchface, and Pebble claims it’s the thinnest round smartwatch available. Also, at $249, it’s far cheaper than any competitors, especially in round watches (Moto 360 2 is $299, and the Huawei starts at $350). Not to mention, both of those are significantly larger than the Pebble Time Round as well. So aesthetically, the Pebble Time Round seems like a home run.

It’s not all sunshine and roses. though. For starters, the tradeoff for a thinner watch is a loss of battery life-this new Pebble will only last 2 days per charge, instead of the 7+ the original and Time/Time Steel offer (Pebble does say it can get 24 hours of use out of a 15 minute charge). In addition, you’re losing out on full waterproofing, with only water/splash resistance. You also run the risk that your favorite Pebble app may not be optimized for a round screen right away. Pebble says they’ll be providing an SDK and they feel it should be easy to convert watchfaces and apps, but the speed of development for Pebble apps can be quite slow.

Also, Pebble just started shipping many Pebble Time Steel orders recently, which stings if you backed the Steel. Pebble is determined to help with that, and is offering a special deal to Time Steel backers. If you preorder a Time Round with the same email you used to Kickstarter back the Time Steel, Pebble will take $50 off the cost of the Time Round, AND give you 30 days from when you receive the Time Round to try both watches. You can return whichever one you don’t want, or you can keep both with your discount on the Round Time. Unfortunately, this doesn’t apply to Pebble Time buyers, but to be fair the Time started shipping several months ago. In addition, there’s likely more overlap between Time Steel buyers and Time Round buyers than there is with the plastic Pebble Time.

I really think the Pebble Time Round could be a huge hit, especially if they can ship it before the holidays. Everyone knows about smartwatches these days, but most people don’t want to wear something that isn’t fashionable. Pebble Time Round looks more like a regular watch, but has all the goodies and benefits of the Pebble platform. It’s cheaper than an Apple Watch or an Android Wear Watch, it looks great, and it works with Android and iOS! Pebble has come a long way, with a great lineup that might just get them a strong foothold in the smartwatch market against stiff competition!