Okay, I have a bit of an addiction when it comes to Bluetooth stereos, and I’m running out of rooms that I can put them in, but I can honestly say that the Sound Blaster Roar 2 is special and becoming my favorite.

Now I’ve seen a lot of Bluetooth Speakers, many with elaborate designs that attempt to divert attention away from what’s most important, that being audio quality. Well, believe me when I tell you that Creative, even at $169.99 got it right on this one. 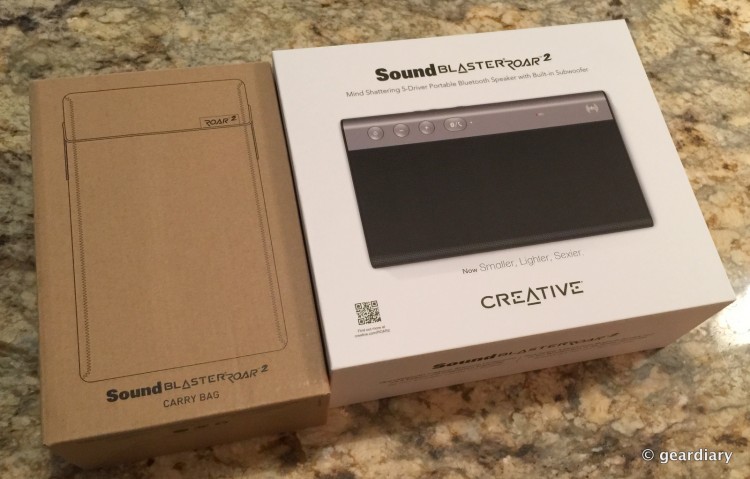 Now in their second version, the Sound Blaster Roar 2, it seems as if Creative opted to focus on one thing that didn’t quite get right the first time out of the gate, which was the overall performance. They packed in features like a voice recorder and little things that we really didn’t need but appreciated. But in an oversaturated market with competition from places like Bose and Ultimate Ears constantly releasing products, Creative took a step back and attempted to do right by its loyal customers by giving you a feature packed portable speaker in the Roar 2. 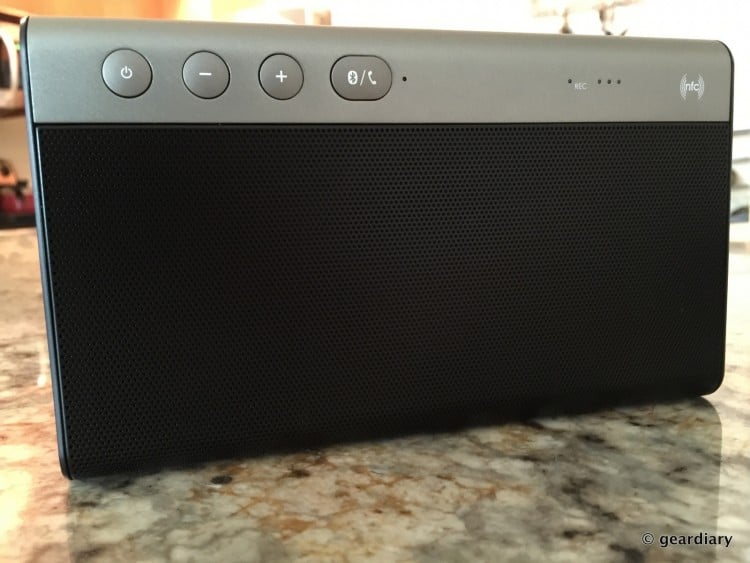 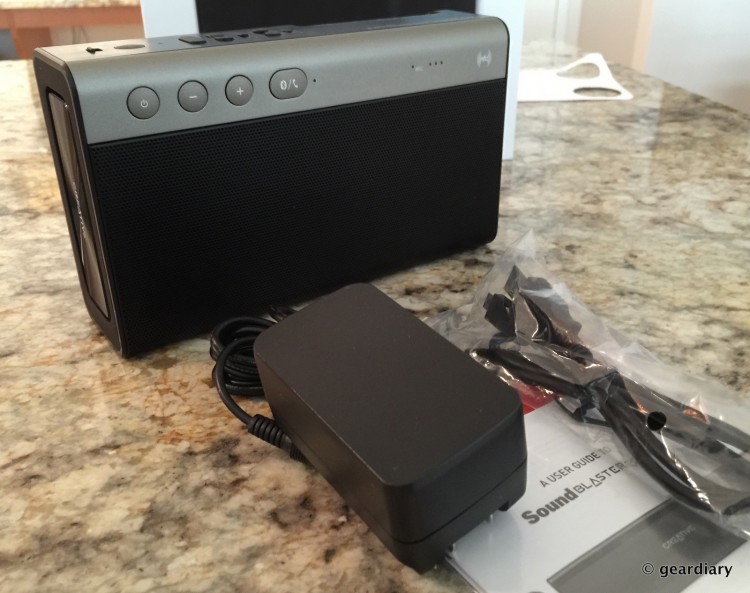 Now 20% smaller than the previous version, and now available in two colors there’s much to love about the Roar 2. Featuring an eight-hour battery life, this is ironically music to my ears. With a battery to last you all day, I’ve caught myself a few times setting up the Roar 2 in my home to clean up, or even just to listen to my podcasts as I play Madden on my television.

The 5-driver speaker is not only small, but it packs a built-in 6,000 man li-ion battery, so you can even charge your phone while jamming out on your patio on a Football Sunday (even though you should be inside). Unlike most speakers though, the speaker comes with it’s own mp3 player in it which I appreciate, a voice recorder, speakerphone, and a USB port for their featured Sound Blaster. Where else can you get that? Exactly. 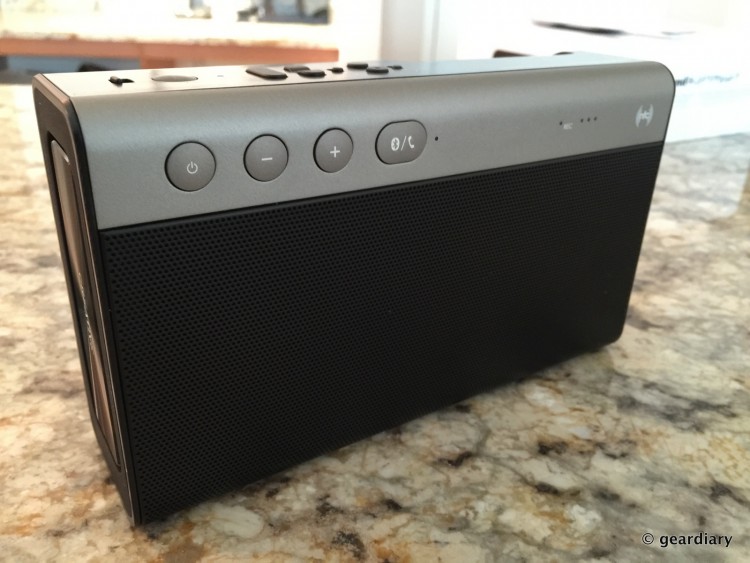 When you look at he Sound Blaster, the first thing you’ll notice is that it’ very sleek. At the top of the Roar 2, above the grill is where the buttons are housed. There’s Power, Volume Up/Down, a Pairing button, indicator lights, an NFC panel, and the microphone pinhole. Pretty simple on that end.

At the rear of the Roar 2 is where the motherland is. Discreetly hidden from the double grilled speaker is where you’ll find: Charging ports where you can charge with the included cable or a micro-sb cable, which I found to charge the Roar 2 a bit slower than the AC adapter included, for obvious reasons. All there’s a USB port and a microSD slot so you can add your own additional music that might not be on your smartphone, tablet or computer. 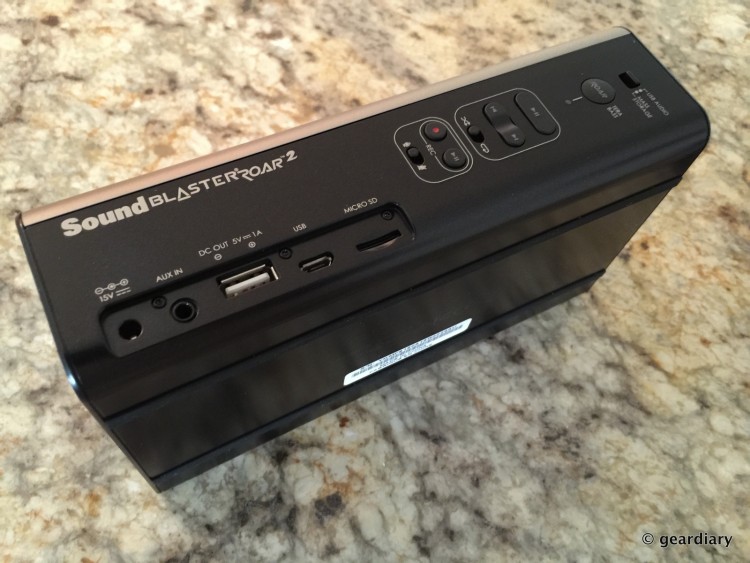 The good thing about the microSD slot is that since you can use the speaker as a recording device, it’s perfect for conference calls, or even if you’re just in a room where you need to have audio recorded via the Roar 2, you’ll have additional space where you can in turn move all of the data back to your computer.

With that being said the buttons to the far right are what you’d be using for recording including standard record buttons including play, rewind, fast forward, and a fancy ROAR button at the end. 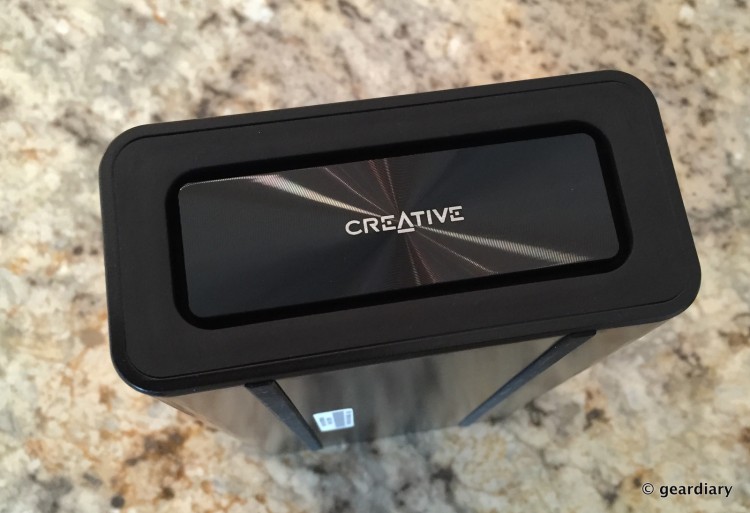 One upside for gamers is that you can connect the Roar 2 to your Playstation 4 over USB which is perfect if you chose to use that type of audio over your television. This is a feature I have yet to use as I do not have a Playstation 4.

When it comes to listening experience though, the Boom 2 is excellent. If you’re in you’re living room, the audio is crisp and clear regardless if you’re listen to music, videos, or my typical podcasts. Listening to Hayley’s “Badlands” album, the overall performance of tracks, including bass and vocals is nice even at the mid-tier volume level. When it comes to music with more depth and instruments, the Roar 2 only slightly struggles to perform at full bass.

Overall though, Creative’s Sound Blaster Roar 2 is not only beautiful, especially in the black model I received, but even with the slight price hike since the original Roar, there’s not much that can disappoint you in regards to the second version of this beautiful speaker. At $169, you can get yourself one today!

What I Like: Double sided speakers makes listening in the kitchen great while cooking; AWESOME sound when powered on including voice