Mazda has hit it out of the park with the all-new 2016 MX-5 Miata roadster. Now in its fourth generation, the new car is lighter, smaller and quicker than the model it replaces while still offering affordable fun. Following the mantra of Jinba Ittai (pairing the driver as one with the car) designers and engineers have created a little masterpiece. 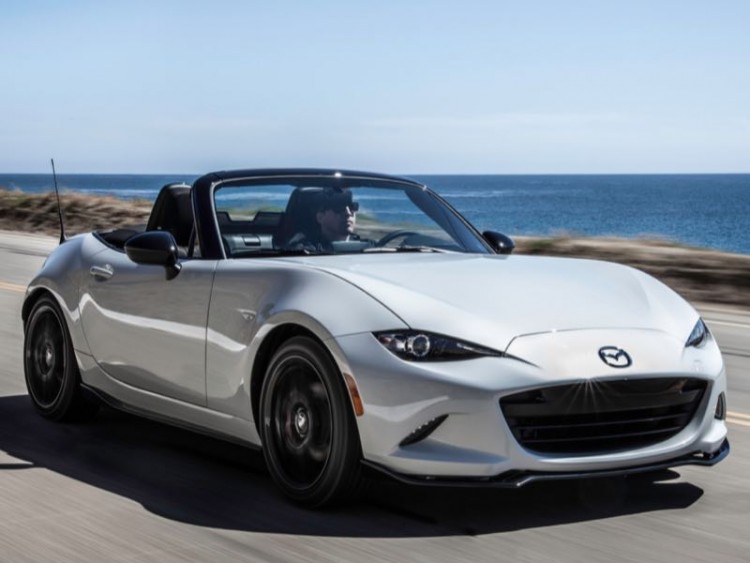 The new car has already garnered the attention of the world as it recently was named not only 2016 World Car of the Year but also World Car Design of the Year. And the double crown is quite deserved in this car as we discovered on a fun road trip to the Texas Hill Country that was all asplash in springtime wildflower color.

At first I was concerned the taut quarters of the cockpit might not be the ideal environment for a lengthy jaunt down the road but after each day of more than 250 miles, I realized this was one of the most comfortable vehicles I had taken on our usual route south. No fatigue, no sore lower back, no aggravation of the sciatica; just pure top down driving enjoyment (don’t forget the sunscreen). 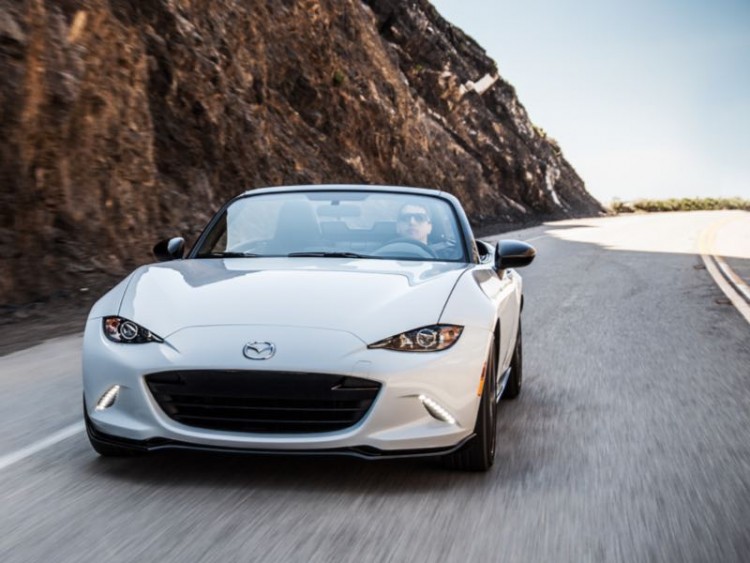 The exterior styling follows the new theme of Mazda, that being of the KODO-Soul of Motion design that is evident throughout the rest of the Mazda showroom. Under the hood is the addition of Mazda’s SKYACTIV powertrain technology that, in this application, increases fuel economy nearly 30 percent over the previous MX-5. Engineers have shed some 150 pounds from the last generation car and despite the addition of all of the safety and technological additions this model is only 182 lbs. heavier than the original 1990 model. 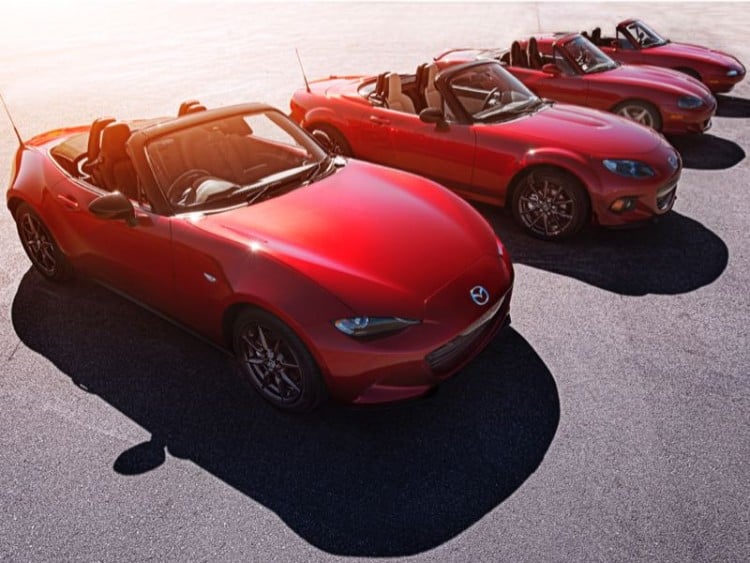 The styling changes are evident right from the start and they continue nose to tail. From nearly every angle this car shows off some very stylish curves while remaining nicely taut. This MX-5 is a swimsuit model pure and simple (sans the high maintenance). Our tester was of the recently released Club variant that adds a front air dam, rear lip spoiler, side sill extensions, and rear bumper skirt. 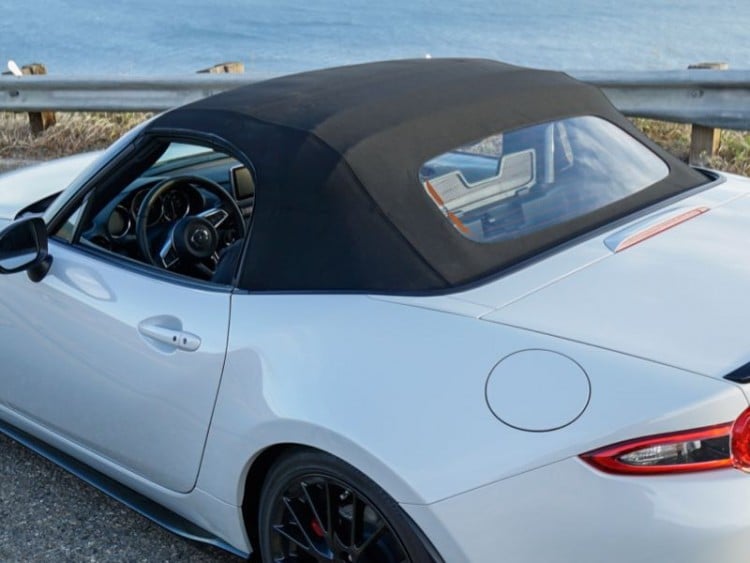 No power retractable hardtop option at launch but one should be coming soon. All 2016 Miatas arrive with a cloth soft top that folds manually but quickly into a space behind the cockpit and ahead of the spacious-for-a-roadster trunk. I was able to operate the roof while sitting in the driver’s seat. Top down this car is an absolute blast to drive. With the top up the car is still fun but the blind spots prove difficult. 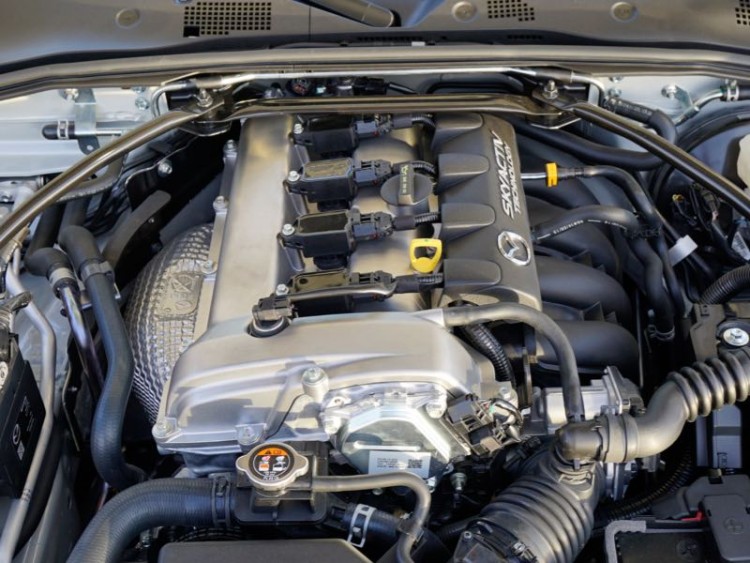 Under the curvy new hood is a 2.0-liter I-4 engine that generates 155hp and 148 lb. ft. of torque. It is mated to a six-speed manual gearbox with short throw shifter in the Club model MX-5. Fuel economy is rated at 27mpg city and 34 mpg highway with this powertrain combination and EPA highway rating increases to 36 mpg if you opt for the six-speed automatic transmission (but the manual tranny is just so much fun to drive). Our Club tester also arrived with Brembo brake and BBS 17-inch forged alloy wheel upgrades. All MX-5 models feature mid-ship engine/rear wheel drive configuration.

Safety does not take a back seat in the new Mazda roadster (especially since there is no back seat). Standard equipment includes dynamic stability control along with traction control system, front side impact airbags, side impact door beams, tire pressure monitor, and full host of ABS braking technology. Mazda also includes roll bars just aft of the bucket seat headrests. 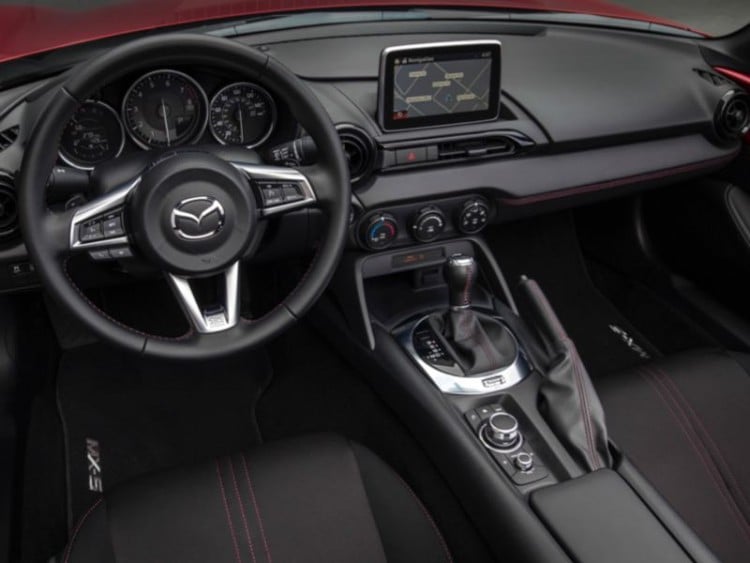 Pricing begins at $24,915 for a base MX-5 and this 2016 Club model starts at $28,600. Our tester arrived with a final sticker of $32,820 that also included Bose premium audio system with SiriusXM satellite radio and navigation. A 7-inch color touchscreen display sits atop the center dash and a multi-function commander controller resides just aft of the shifter. The Club model wraps the interior in stylish leather with contrast stitching. 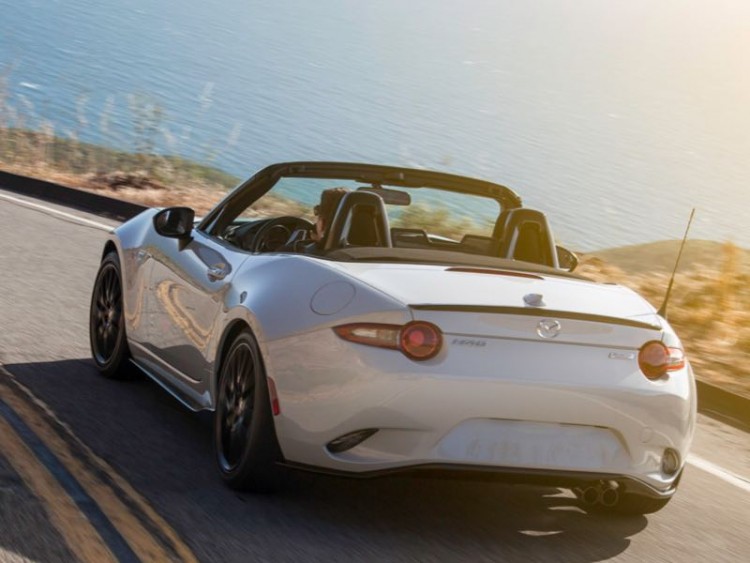 This is the sexiest Miata yet and it truly deserves the World Car Design honors. It is fun yet easy to drive and while it is only a two-seater with minimal trunk space it is perfect for the weekend getaway and unless you are hauling all kids to school or activities works well as a daily driver too.