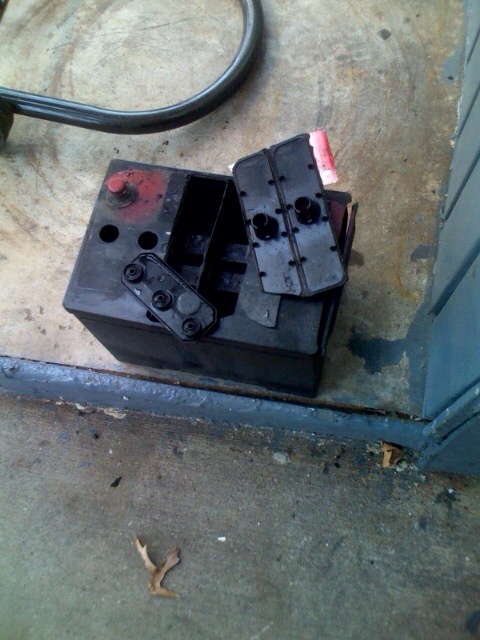 This is the actual battery from my Altima, post-explosion

News broke this week that a Tesla Model S caught fire after hitting a piece of debris on the highway. People buzzed about safety, and Elon Musk posted a letter explaining why the Model S is actually safer than most gas-powered vehicles. My reaction, however, wasn’t fear about Teslas – I was happy someone had a weirder “exploding car” story than me!

Several years ago, I drove a 2000 Nissan Altima. It had been my grandmother’s, and since she barely drove it before I used it, it had the original battery. Fast forward several years and several thousand miles, and I stopped at a 7-11 on my way home from the gym. I got back in the car, turned it on, and then suddenly there was a huge BANG and smoke started streaming out from the hood of my car. The sketchy guy in front of the 7-11 (because there’s always a sketchy guy in front of a 7-11) suggested I pop the hood and maybe he could diagnose the issue. Once I’d stopped shaking and figured out the mob probably wasn’t trying to bomb me, I popped the hood and stared inside. After a brief second, I turned to my new friend and said: “I don’t know much about cars, but I’m pretty sure the battery isn’t supposed to be an open container.”

Apparently, car batteries can explode. You don’t even need debris on the highway, just a bad alternator, an old battery, and crap luck on a random evening. Despite that, I still bought a hybrid as my next vehicle (a few years later, as the Altima survived its near-death encounter) and if I won the lottery I wouldn’t be afraid to buy a Model S either. Heck, according to Musk’s letter, the Model S managed to make it off the highway and the driver made it safely out of the car and away from the vehicle…if a regular car battery explodes, good luck getting anywhere without a tow.

Did the Model S news catch your attention this week? Does it raise any worries for you about electric vehicles, or is this whole thing overblown?