Kellogg’s has never had a great reputation in the allergy world. For example, Kellogg’s would not tell someone if their allergen is in a product if the allergen is not required to be labelled by the FDA. Now they’re really getting dangerous, though, with the addition of peanut flour into various savory and previously nut free crackers. 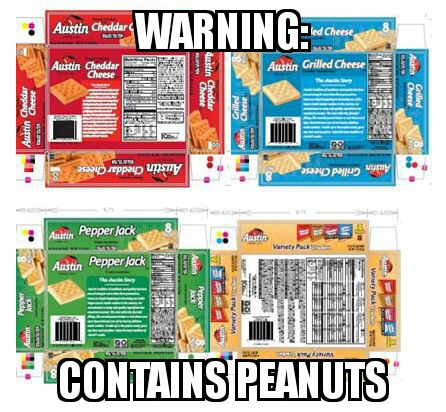 In a nutshell (no pun intended), Kellogg’s appears to be trying to boost the protein content and/or save money on their crackers by adding peanut flour. The crackers in question aren’t ones you would normally expect to contain nuts; rather, they’re various cheese sandwich crackers. Because when people eat pepper jack crackers, their first thought is always “Dang, if only this had an inexplicable peanut flavor.” This is obviously dangerous to people with peanut allergies, but worse, these aren’t crackers that most people would associate with nuts. While parents and educators may be trained to always check labels, there’s a serious danger that an uninformed caretaker could serve these to a peanut-allergic kid, thinking they were cheese crackers and therefore safe. Likewise, a non-allergic kid might eat these near an allergic kid, and the dust from the crackers could be enough to cause a reaction in severe allergy cases.

Kellogg’s has never been an allergy friendly brand, however. If you have a “top 8” allergy (peanuts, tree nuts, shellfish, fish, milk, wheat, eggs, soy), the FDA requires that Kellogg’s disclose if the allergen is used to make the product. However, let’s say you’re allergic to sesame (the number 9 allergy in the USA and worldwide, and required to be labelled in Canada and Europe). Kellogg’s WILL NOT tell you if there is sesame buried in the ingredients list of their products; legally they can lump sesame in as a “spice” and not list it as a separate ingredient for proprietary formula reasons. Even if you call and ask for a simple yes/no, Kellogg’s will stonewall you unless you provide a written request from your allergist. Just to make this crystal clear: Unless your doctor writes you a special letter, Kellogg’s will not tell you what is in your food.

So it’s not a shocker that Kellogg’s is extending their callous attitude to peanut allergy sufferers as well, but if you’re concerned, please sign this petition asking them to reconsider. Remember, peanut allergies are among those most likely ones to cause anaphylaxis, which can be fatal if not treated in time. Remind Kellogg’s of this as well, and hopefully, they’ll reconsider their reformulation!