As a huge fan of using Speedtest.net to test the speeds of my internet connection, both on Wi-Fi and LTE, I’ve always seen ads for Speedify and wondered exactly what the program would do to actually help speed up my performance. So when I had the opportunity to review the iOS app for Speedify, I was intrigued. 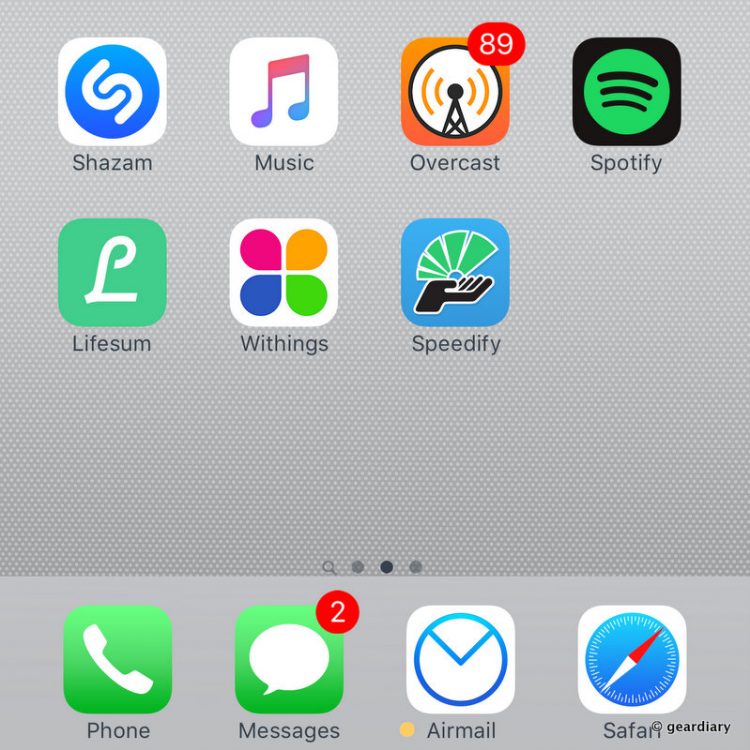 Now just to start, I am by no means a wireless networking guru, but I do find myself frustrated with a slow connection. Recently I’ve been traveling a lot, which means plenty of hotels with crappy internets speeds, and pricy “upgrades” for “less-crappy-but-still-not-good” speeds. This is where Speedify actually comes into play. Using VPN the entire premise of Speedify is, you guessed it, to speed up a sometimes prehistoric approach to data speeds. Giving you the ability to actually combine multiple internet connections simultaneously, Speedify actually makes it so that you can combine your 3G, LTE, AND Wi-Fi in order to get more reliable service out of your device.

As I live in a big city where the service is okay on my Verizon network, and work around nothing but businesses where the towers themselves are overloaded with hundreds of people all attempting to get decent connections. Finally, I can say that now, I do not have a concern with my connection, be it at Starbucks, or even just walking on the monument as Speedify has taken care of everything for me. While Speedify is not going to be an app that will accelerate your downloads, or boost your internets speed, but rather give you the ability to use multiple connections with help from their own personal VPN servers. By measuring bandwidth and reliability of each of your connections, Speedify then goes and divides your services using a system called “channel bonding”. 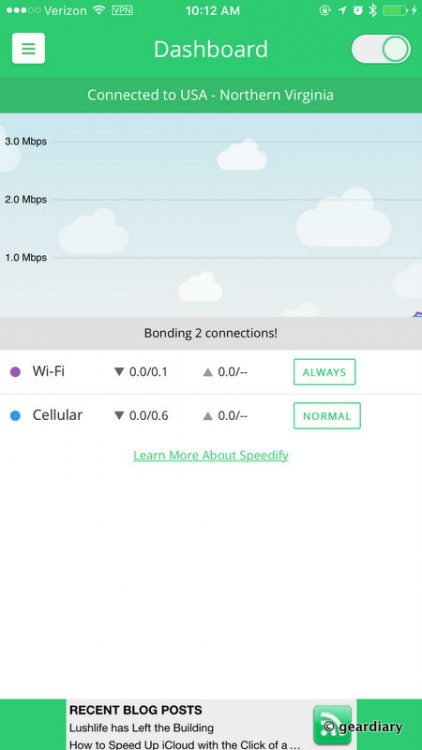 The iOS app that I’ve been testing on my iPhone 6 Plus certainly has come through in the clutch, especially on the recent trip I mentioned earlier. The app itself is pretty simple to the casual user who honestly has no idea about VPN’s and simply wants more reliable service. After downloading the app, you simply create yourself an account and go through the process of giving permissions to your notifications and location. There’s naturally a tiered system to the app, but to start you off, Speedify does give you 1gb of data transfer per month, with the option of earning more through a referral system, similar to Dropbox. If you only plan on using this for your mobile device, it will set you back $5 a month, or 430 yearly, which is not much at all, especially figuring that cell phone providers like Verizon charge you $20 for every gigabyte you go over. Imagine how much money Speedify is saving you in this regard, but we will get into that later. Also if you are a desktop user, there is a plan for that as well, for $18 a month or $88 a year. 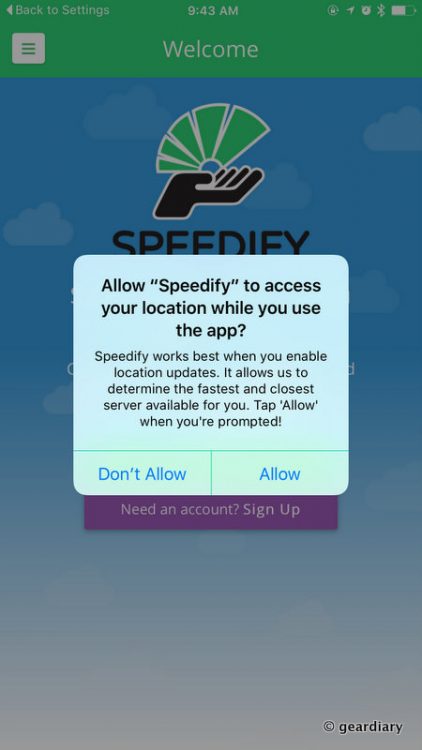 Now the app will need access to your location in order to give you the closest server to you that it deems to be reliable. In my case, Northern Virginia is the closest, most reliable tower, followed by large cities like Chicago, Newark, and New York City.

Once you’ve given the app the correct permissions, a new icon will end up in your status bar stating that you are using VPN, typically beside your cellular provider on your iPhone. This is good to have as Speedify actually will route the data you use through a secure server before sending the information through the interweb, which is a great deal for those of you who are using a company device, or even just a device with a lot of personal information that you don’t want accessible when using public Wi-Fi on top of your data. So what if you were to use the VPN service in the workplace? Will your information still be secure? Is Speedify safe in this case?

Well Alex Gizis, CEO of Speedify chimed in to state:

“First it’s worth noting, that Speedify detects if you’re connecting to a local server on your office network, and just lets that go straight to your local network, without Speedify touching it.  So your standard office IT gear like printers and file servers work just fine with Speedify.”

I leave Speedify running at the office for reliability. I plug into the office Ethernet, and then let my Wi-Fi join either the office Wi-Fi or sometimes a Comcast xfinity hotspot. Speedify just uses the Ethernet because it sees how much faster and more reliable it is than the public hotspot. But if I kick out the Ethernet cable, or our Internet goes down, Speedify rolls me over, and I stay connected.

In my testing the app, I noticed that there are graphs that highlight measures of usage, which are all color coded according to the connection that you’re using. This is actually handy to look back on to know exactly the root of your internet slowdowns caused by lack of adequate network, so you can see where LTE or Wi-Fi pick up the slack for each other. 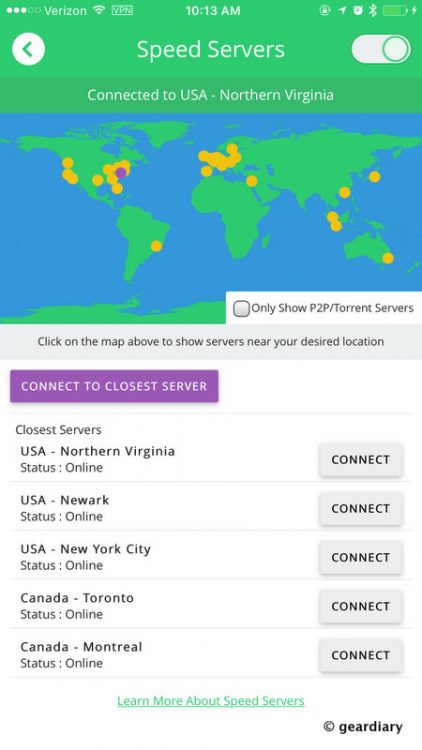 Being an unlimited data user on Verizon (and holding on for dear life while saying that), this actually comes in handy for all data packages, even ones limited to just a few gigabytes a month. Speedify comes in handy in this regard as there are settings within the app itself where you can set a cap of how much data you use, and Speedify will cap it off to prevent you from consuming too much on your Network provider’s data, all while alerting you with notifications about the process. 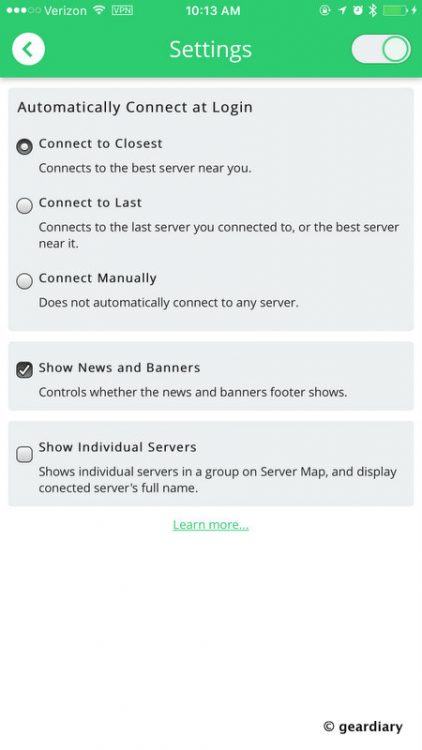 Using Speedify for a month has been great, especially in terms of streaming media. Being an Apple Music advocate, and an avid Plex user, I found myself in my hotel room one night attempting to not be bored with Harrison Ford movies on HBO, and decided to stream a bit from my iPhone. Plex actually did pretty well, with limited buffering, and actually an overall fluid viewing experience. Where I did experience a few hiccups happened to be with Netflix, since the company more recently has blocked the ability of using VPN connections, rendering Speedify useless in that regard. 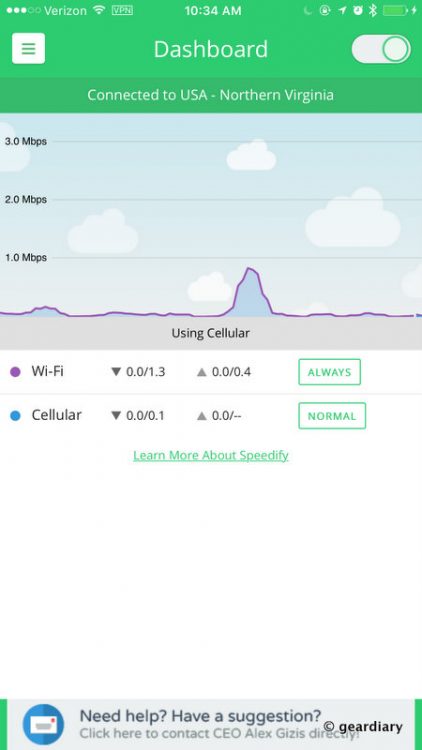 While at home, I’m exclusively on Wi-Fi courtesy of Verizon FiOS, and while a solid provider, my apartment does tend to have a dead spot or two. And having two iPads, three smartphones, two gaming consoles, Macbooks, smart TV’s, and a very overzealous puppy, sometimes, the Wi-Fi Connection can be choppy. But courtesy of Speedify, since I never exclusively turn my data off, Speedify bridges the gaps when I’m simultaneously using more than two devices by using cellular connectivity to pick up the slack. This causes me to never shake my phone thinking doing that will cause the internet to simply “go faster”.

Why do you need Speedify? The answers pretty simple. There’s always going to be that moment where your Wi-Fi isn’t “blazing fast” like the commercials say. And there are even more moments where your cell phone provider’s network isn’t as fast as the marble maze you’ve seen in the commercials. Speedify is simply there to help the two get along better, for a reasonable price, all the while giving you consistent connectivity.

For more information about Speedify, you can pick up the apps for iOS or Android for free!

What I Like: The ability to bridge the gap between data/Wi-Fi seamlessly; no learning curve

What Needs Improvement: Wish data was free for more than just 1GB