If the old-fashioned “ear-trumpet” is what you think of when you think of a hearing aid, you’re only a couple of centuries behind on the tech. Today’s hearing aids are tiny, little things that help their wearers hear well without being obvious or conspicuous. 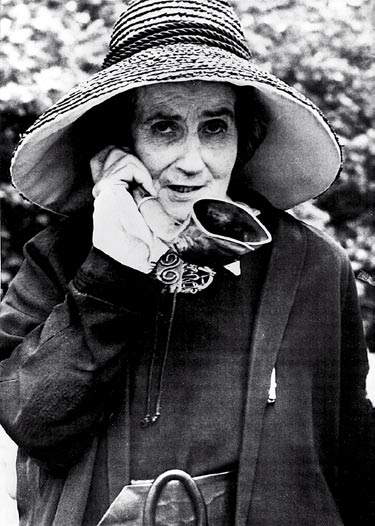 In just the last 20 years, hearing aids have shrunk from being bulky over-the-ear apparatuses with cable connected transistors to tiny devices that either fit in-ear or that inconspicuously go over the ear. Because my mother has worn hearing aids for almost as long as I can remember, I feel that I have had a front row seat as a spectator to their evolution.

I recently had the chance to check out the Signia Pure primax hearing aids and their easyTek and TV Transmitter accessories. What sets these hearing aids apart from any that my mother has ever used is that they are connected: not only do they come with accessories that make it possible to stream music or television directly to the hearing aids, they also allow you to use apps to customize where the hearing aids are focused at any given time. 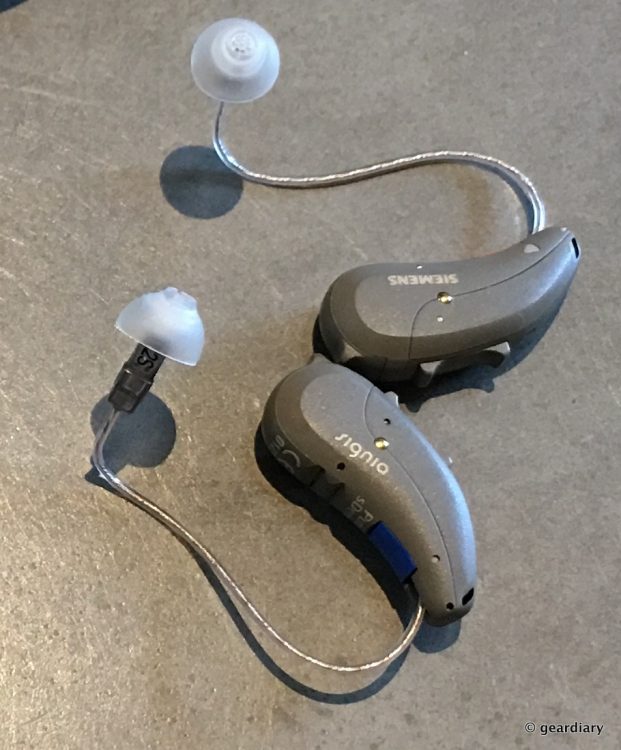 Let’s take a look at the Signia Pure primax hearing aids, and then I’ll discuss their accessories. 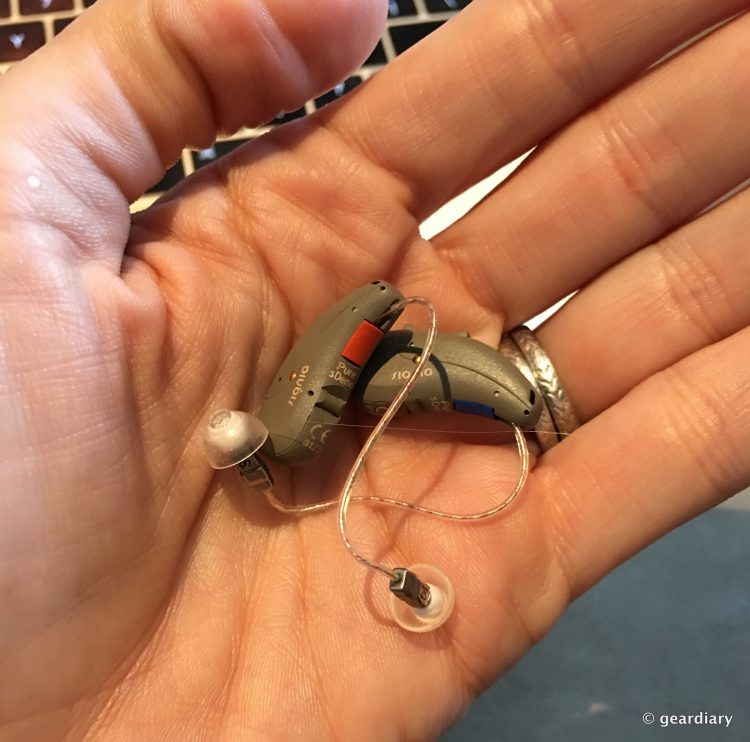 Even though the technology has changed and improved over the years, the basic concept of how a hearing aid works really hasn’t. “Sound waves enter the tiny microphones and then get converted into electrical signals. These signals are sent to an amplifier, which increases the volume and routes them to a receiver (speaker). In the model I have, “the speaker is located at the end of a tube. The tube is connected to a dome that gets inserted in your ear canal.” Evidently the real magic happens in the hearing aid chip, the tiny micro-processing chip that powers virtually every hearing aid command “from the time audio enters the microphones to when it’s delivered into your ears and heard by your brain. The hearing aid chip is what distinguishes one hearing aid from another.”

Here are some fun facts about the Signia primax chip:

Although I have great hearing, there are times when I can’t possibly catch everything that is being said — perhaps because the person speaking is mumbling (I hate that), or because I am in a noisy place. Signia primax has several cool features that can help with this.

Primax technology uses something they call SpeachMaster, which gives the user better than normal hearing ability when they need it the most. It’s like an “audio radar” that is always on, scanning your environment. It works automatically, and as your environment changes, it locates and highlights the target speech while suppressing competing noises.

A great way to test SpeechMaster is by wearing the hearing aids in a noisy bar. Using the touchControl app (available in the Apple App Store or Google Play), you can actually have a normal conversation with your friend or friends by elevating the speech of the person you want to listen to with the use of the touchControl app. Signia likens this to a “sound wave tractor beam” that you can aim in the direction you want to focus your hearing — and it works! 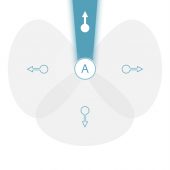 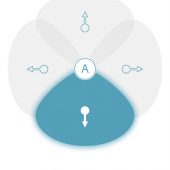 Even crazier is when you are in a car, your hearing aids will recognize the sound of a car’s engine and they will switch into Car mode. At this point, SpeechMaster knows to activate Spatial SeechFocus, which uses a series of algorithms to find out where speech is coming from and “automatically zoom in on that direction — even if you’re not facing that person”.

Listening to people outside on a windy day is difficult even for people with good hearing; imagine how frustrating it must be for someone with hearing loss. Most people who wear hearing aids in the wind get the same effect in their ear that you get when talking to someone who is standing n a windy place on the phone — it’s noisy, disconcerting — and that’s why so many people who wear hearing aids will simply remove them so they don’t have to deal with all of the extra noise. Signia’s SpeechMaster has a feature called eWindscreen Binaural to combat this. When wearing the hearing aids in a windy place, you’ll hear the wind rushing by you for a moment or two, and then — like magic — the sound will automatically reduce.

So many people, especially those my age or older, killed their hearing by listening to music at concerts or in their cars too loudly. They suffer from Noise Induced Hearing Loss, and that can be really heartbreaking for someone who loves listening to music. The Signia primax HD Music program has “three dedicated music settings to deliver sound quality rivaling high-end headphones”. Primax does this by “vastly expanding the frequency range of sounds well beyond the normal settings needed to hear speech — up to 12 kHz across 48 channels. In other words, you’ll be able to hear it all. To help personalize the music listening experience, there are three HD Music settings — Recorded Music, Live Music, and Musician.

Another cool feature of the Signia primax hearing aids is EchoShield, which battles reverberation, “a phenomenon that occurs when direct sound waves are reflected from surfaces.” It’s what you can hear in a stairwell, a large concert hall, larger living rooms with hardwood floors, or even the shower (but you shouldn’t wear your hearing aids in the shower, just sayin’). EchoShield automatically determines which sound waves are direct and which are reflected, and it quiets the reflected sound waves. 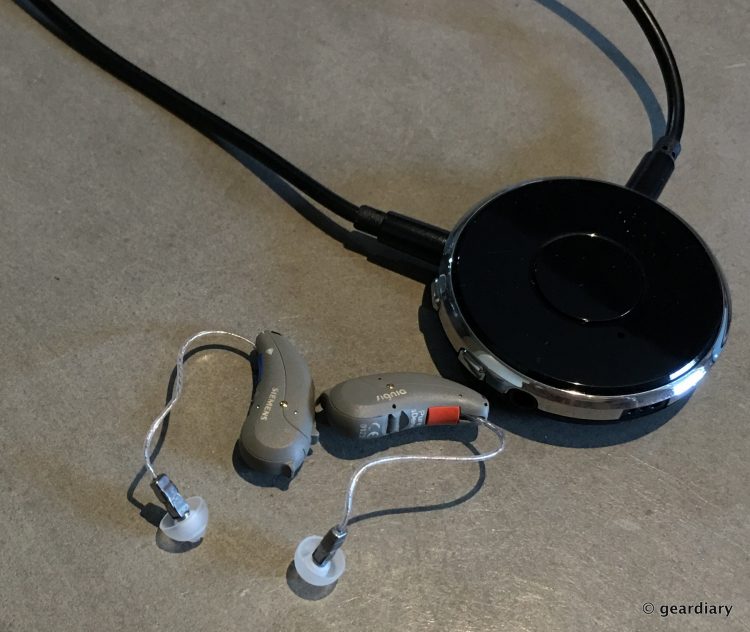 Here’s where the accessories come in. I was sent the Signia easyTek to try; the easyTek is a combination “wireless streamer and one-button remote control” that you can wear around your neck either above or below clothing. Why would you want to do this? Because it turns your primax hearing aids into your own Bluetooth headset, wirelessly streaming your favorite music directly to them! In conjunction with the easyTek app (also available in the Apple App Store or Google Play), you can use the easyTek device for wirelessly streaming phone calls, music or other media, or you can add the Transmitter to stream television shows directly to your hearing aids!

There are so many things that you can do with the Signia Pure primax hearing aids and their accessories, that wearing them doesn’t feel so much like a chore, but more as a nearly invisible bionic enhancement. 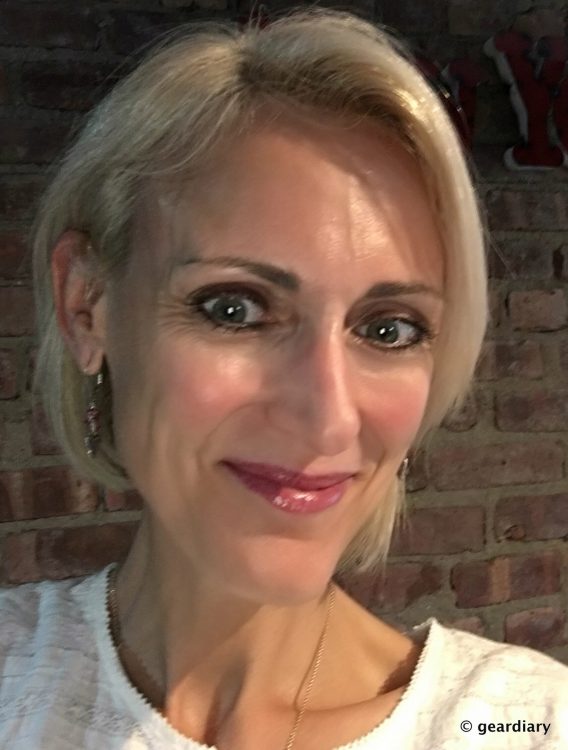 Can you spot the hearing aid? I even pulled my hair back so you could see it!

Here’s the deal about hearing aids, and it is an important thing to note: you can’t just order a pair and think they’ll work for you. They are FDA-regulated medical devices, and as such “they are only sold via licensed professionals who typically bundle in the costs of other services (hearing exams, diagnostic testing, hearing aid programming, fitting, fine-tuning and follow-up visits) into the total purchase price.”

I asked my contact at Signia to give me a rough idea about what hearing aids like this might run, including the accessories and other health care professional related costs. Obviously, it’s hard to give a solid price, but here’s what they had to say:

Some hearing care professionals do unbundle their pricing (for example if a hearing aid is purchased elsewhere and brought in for fitting). However, in a typical sale that includes all hearing-related services, the estimated cost of a pair of Signia primax hearing aids can range anywhere from $4,500 – $6,500 (this is for 2), depending on technology level. The demo models you have are our highest level at 7px (px is short for primax) so they would cost closer to the $6,500 mark while a pair of 3px would be closer to $4,500 and 5px level somewhere in the middle around $5,500. But this all depends on the hearing care professional and is only an estimate. Prices can be more or less depending on what’s included.

Here’s a breakdown on estimated pricing in short (with all hearing-related services included):
· Signia Pure 7px: $6,000-$6,500 for a pair

I know that the prices will seem shocking to any of you who have never worn a hearing aid, but they don’t surprise me at all because I’ve been witness to my mother’s hearing aid pricing over the years. The good news is that some insurance helps with their cost, and some states even require insurance to help pay for them. If you have hearing loss that is serious enough to require a hearing aid, then you’ll need to check with your insurance to see if or how they will help, you should also be aware that there are many organizations that will help.

I came away from this testing experience impressed and hopeful; my hearing is good right now, but if I ever find that I do have a hearing issue, I’ll know I have options that I can very comfortably live with.