There has been quite a bit of excitement around the idea of modular phones this year; LG’s G5 introduced their take on modules with their “Friends” collection, and Moto has taken it a step further with their Moto Mods for the Moto Z line. Let’s take a look …

Made to fit any Moto Z phone, Moto Mods use a unique system that combines magnets with contact pins; installing a Moto Mod on a Moto Z smartphone involves the ridiculously simple process of setting the Mod on the back of the Moto Z phone and letting the magnets do the rest.

What in the world is a Mod, and why would you want one?

Think about it like this: there is always something we complain about when we get a new phone. We wish it had a better camera or better battery life to start. With the Moto system, you begin with your choice one of the Moto Z line smartphones; I got to try the Mods with the Verizon Moto Z and the Moto Z Force.

Joel recently reviewed the Moto Z Force Droid, and I know he’s been pleased with it. I’ve been predominantly using the Moto Z, which is an ultra-thin phone with a 5.5″ screen, 13-megapixel rear camera, 64GB internal memory, a Qualcomm Snapdragon 820 processor with 1.8 GHz Quad-core CPU, and a 2600mAh battery. On its own, the phone is an excellent choice; it is fast, it has a beautiful screen, and it takes great pictures.

When you add Mods to the mix, the any of the Moto Z line can become a super phone.

I’ve spent the last month or so using the Moto Z and the following Mods: JBL SoundBoost Speaker, the Kate Spade 2220mAh Power Pack, and the Insta-Share projector. Each of these Mods adds functionality to the phone in handy ways.

The Kate Spade Power Pack (a designer version of the plain black Incipio offGRID  also offered) is a black, white, and gold shiny plastic snap-on battery pack. Unlike most battery cases or add-on batteries that we’ve ever seen, the Power Pack does not have its own built-in charging port, rather it charges when attached to the Moto Z as the phone charges.

Shot with DXO ONE Camera

There are several features to the Power Pack that I appreciate beyond the fact that it is so incredibly easy and convenient to be able to simply (literally) snap a battery pack on the back of my phone without cables or large cases of any kind.

The Kate Spade Power Pack adds up to 22 extra hours of battery life to a phone that already gets great battery life; using it, I have been able to go up to three days without charging the phone; the battery has an efficient system of topping off your phone’s battery automatically and never letting it run below 80%, which allows the battery to last longer than if it waited to switch on until the Moto Z’s battery was almost empty. Priced at $59.99 for the plain black or white OffGRID version or $79.99 for the Kate Spade or Tumi designer versions, the Power Pack is a very handy Mod that I consider a Moto Z owner’s necessity.

Do you often find yourself giving presentations in the most random places? Do you want a unique way to keep the kids occupied? Then you need an Insta-Share Projector. 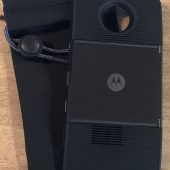 A storage pouch for the projector is included. 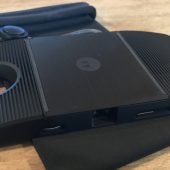 Wheels on either side of the projector allow you to adjust focus. 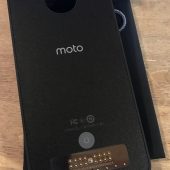 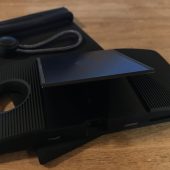 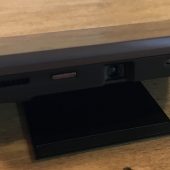 There is a built-in kickstand for perfect projection aiming.

My main complaint about this projector is that it only has 854×480 WVGA (480p) resolution, so you shouldn’t expect HD playback. The up to 70″ picture looks pretty good, and the Mod has an 1100mAh internal battery that adds up to an additional 60 minutes projection time. This Mod also wirelessly charges when it is attached to the Moto Z phone.

I have mixed feelings about the $299 Insta-Share Projector; on the one hand, I can see how it would be handy for some, but I basically pulled it out, tried it, and then put it back. I don’t have a daily or even weekly need for this type of Mod, so that’s $300 I probably wouldn’t spend

The JBL SoundBoost is the Mod I got the most use out of, next to the Power Pack. I absolutely loved being able to snap a fantastic speaker onto the back of my phone with no need to pair via Bluetooth — just snap the speaker on the back of the Moto Z and it just works.

The JBL SoundBoost adds two 3W speakers and its 1000mAh internal battery allows an extra 10 hours of battery life (this Mod charges —  you guessed it — when it is attached to the Moto Z and the phone is plugged in).

While the music played by the SoundBoost doesn’t get incredibly loud, it is easily enough to fill a room. It’s definitely a better sound than the phone produces on its own, and having the SoundBoost snapped to your phone is infinitely more convenient than carrying a portable speaker. The SoundBoost also operates as an excellent speakerphone for conference calls. Perhaps I am still having sticker shock from the Projector, but at 79.99, the SoundBoost seems reasonably priced.

I’m sad that I didn’t have a Hasselblad TrueZoom to play with for very long; it was announced while I was at IFA, and I was able to play with one for a bit. Basically, this Mod adds a 12-megapixel camera Hasselblad camera with a 10x optical and 4x digital zoom to your Moto Z. 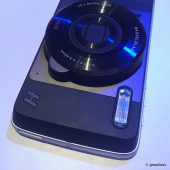 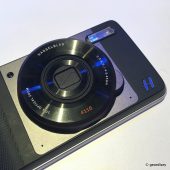 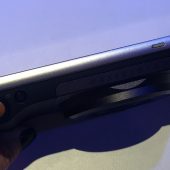 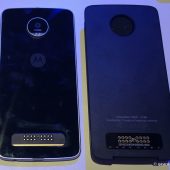 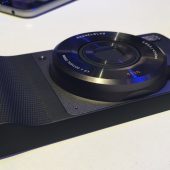 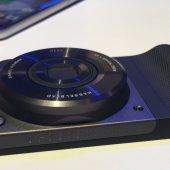 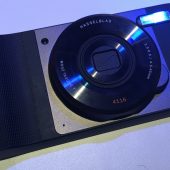 Attaching the Hasselblad TrueZoom to your Moto Z adds the ability to shoot video at 1080p Full HD at 30fps; the camera has image stabilization, and it can shoot photos in JPG, DNG (RAW) and MPEG4 Video. The only caveat I see is that the camera doesn’t have its own storage solution or card slot; you’ll have to store photos taken on the phone — or preferably a memory card in the Moto Z. If you get one of those new 200GB or 256GB microSD cards, you should be able to shoot all of the RAW photos you want. At $299.99, this is probably the most affordable Hasselblad branded camera that we’ll ever see.

These are the four main Moto Mods available now. What I love about each of them is how easy they are to swap in and out to bring the Mod’s particular properties to your Moto Z phone. I like how they charge when they are attached to a charging phone, and I like how they have their own batteries so they don’t drain your phone any faster than absolutely necessary when in use. The system is brilliant, and it makes an already very good phone somewhat amazing and absolutely personal.

You can customize your own Moto Z phone and purchase Moto Mods here.