As I have mentioned previously, on of the features, I like best about the iPhone X is its ability to charge wirelessly with Qi-enabled wireless chargers. The Scosche MagicMount Pro Charge takes that awesome feature to a new level with wireless, cradleless charging. And while you don’t need it, you’ll also want to pick up a Speck Presidio Mount case. 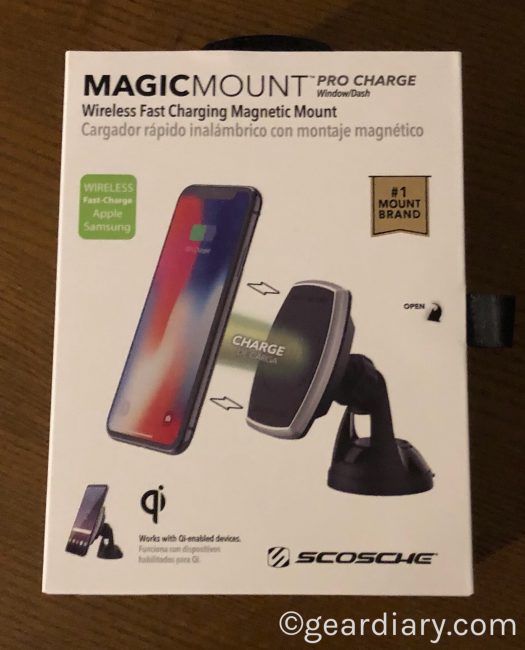 The $59.99 Scosche MagicMount Pro Charge is a car charger that offers window and dash mounting with Qi wireless charging. As a Qi wireless charger, it works well and delivers up to 10W of power. That’s enough to quickly charge almost every Qi-enabled device. In addition, it uses magnets rather than force to hold the iPhone in position. 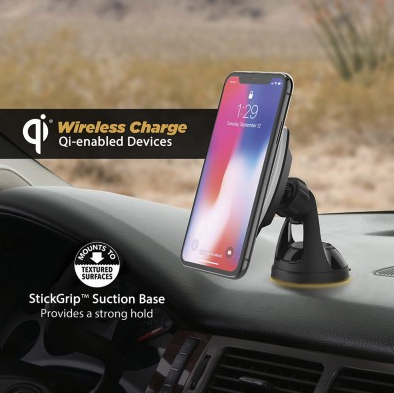 Before we dig into the product itself let’s pause and talk about this wireless charging thing that has, deservedly, gotten so much attention. Scosche explains the technology this way:

What is Qi (pronounced “chee”) wireless charging anyway? First off, it’s the global standard for smartphone wireless charging. Wireless charging functionality is finding its way into millions of devices. Wireless charging uses electromagnetic fields to safely transfer power from a transmitting source (in this case the MagicMount Charge unit) to a receiving device (built into Qi-enabled smartphones or available as an add-on via battery covers, receivers and more) for the purpose of wirelessly charging the device’s battery.

The company goes on to explain that many companies use terms like “Qi Compliant,” “Qi compatible,”and “Works with Qi” but that doesn’t mean they have been tested for safety and energy efficiency. As you might expect, Scosche’s offerings are Qi Certified and have gone through rigorous testing to make sure they are the very best wireless charging solutions Scosche can offer. 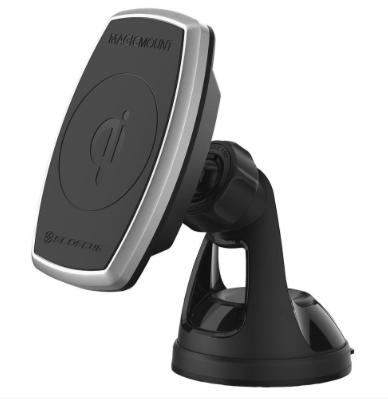 What Scosche did with the MagicMount Pro Charge is take the latest Qi wireless charging technology and combined it with their proven mounting designs. The result is “the ultimate solution in hands-free magnetic mounting and wireless charging.”

The magnetic mount holds your phone securely and the 10W Qi wireless charging let’s your top off your Apple and Samsung device as quickly as the devices will allow. 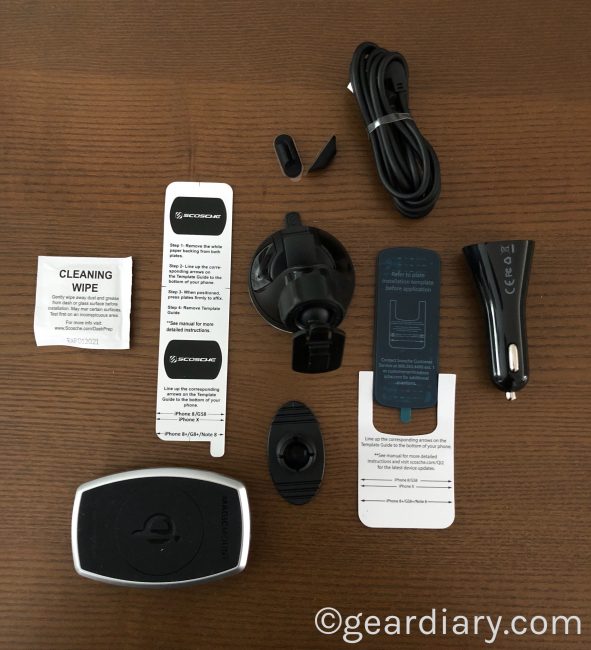 The mount itself is fairly familiar. It comes with a small adhesive plate you can use on your dash or a larger suction grip that mounts to a smooth surface like your windshield or dash. 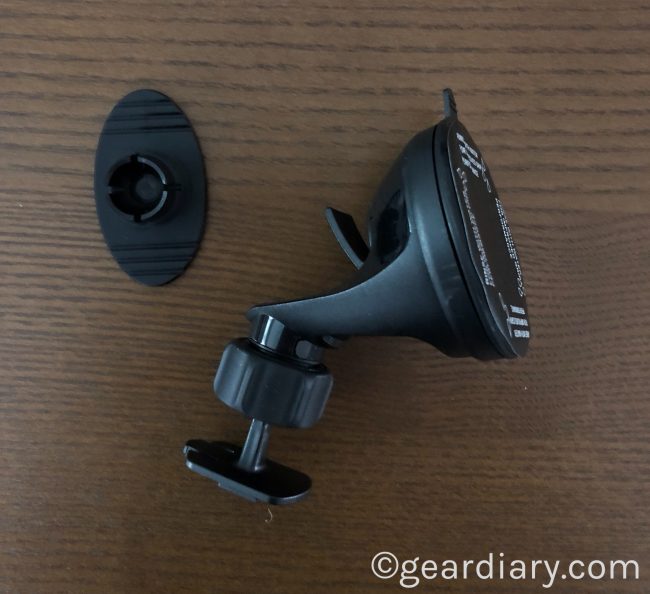 I initially tried to use the small plate. It worked initially but lost its grip when the car sat and baked in the sun one day. 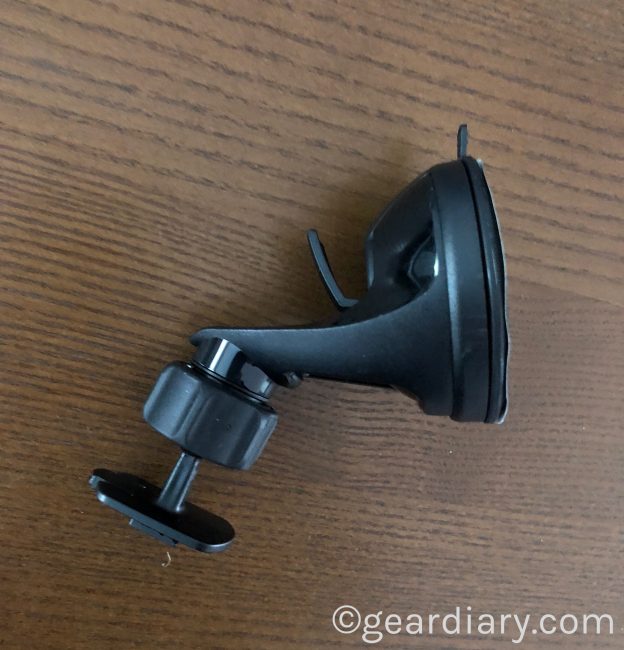 I then tried using the suction mount on a smooth part of my console (I prefer to not obstruct my view out the windshield, and I don’t like having a power cord snaking into view if I can avoid it.) 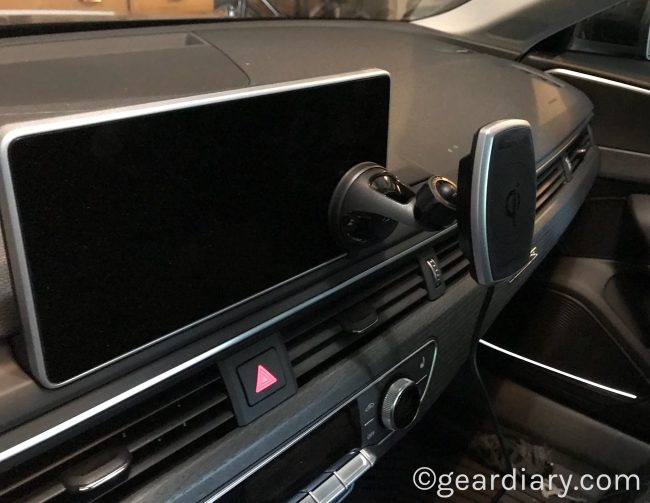 It went on easily and had stayed put despite the insane heat we have been experiencing the last few weeks.

The windshield suction mount connects to an adjustable arm. It, in turn, connects to the magnetic Pro Charge mount with Qi wireless charging. 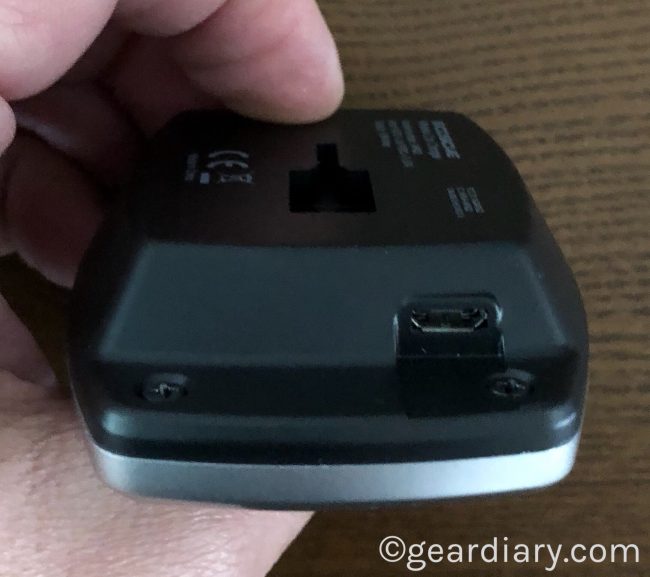 The mount has dual magnets that work in partnership with one of the two sets of included metal plates. There’s the Phone Plate and the Magic Plate. More on those in a bit. Alternatively, you can get a case from Speck that already has the metal plate built into it. (That will be addressed in a separate review.) Regardless of the method you choose, the metal plates and magnets in the Magic Mount hold your phone not only in the optimal position for viewing, something that is especially helpful when the device is being used for GPS but also sends a charge to the phone. 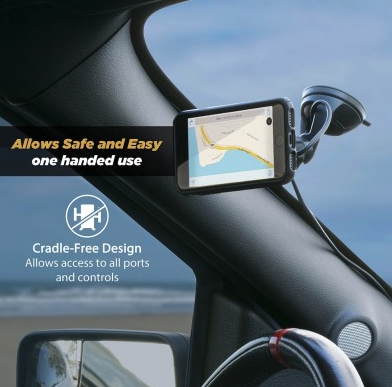 The mounts can be adjusted and rotated thanks to its “4-axis adjustability with lock-nut positioning.” That means you can position it to hold the phone in any position you desire which is ideal, since landscape is likely better when your phone is being used for directions, and portrait is better when the phone is simply being held in place for charging and, when stopped at a light, viewing recent messages. 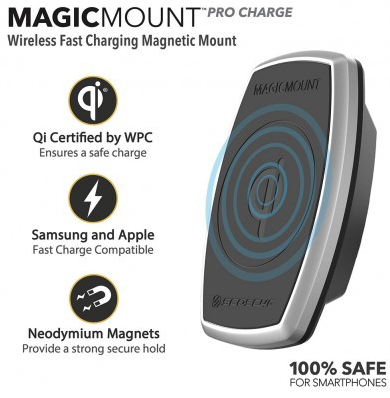 The Qi charger built into the MagicMount isn’t simply a fast-charging 10W wireless charger, but it includes what Scosche refers to as “Foreign Object Detection.” This advanced safety feature makes sure the MagicMount knows the difference between. A phone connected to it and something that is not designed for Qi charging. That “safeguards your device from overheating and becoming a potential fire hazard.” It is a terrific safety feature that is really a must in a world where wireless charging is finally taking off.

This level of protection is important to the company.

The peace of mind of knowing you own a Qi Certified wireless charger thoroughly tested by independent laboratories to ensure its safety, interoperability, compatibility and energy efficiency. 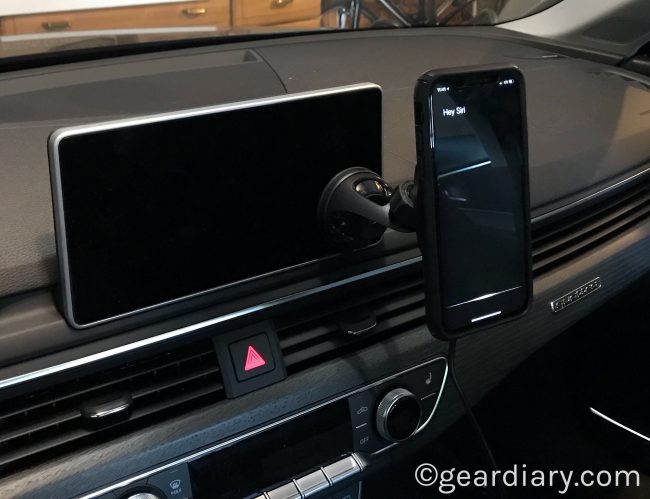 Finally, it is worth noting that this phone mount doesn’t require you to slide the phone into anything. It simply sits on the MagicMount and, as a result, you can still access all the ports and buttons.

The accessory ships with two different mounting options. That means you can use it with a variety of different devices including Apple’s iPhone 8 and X, Samsung Galaxy S6/S6 Edge, S7/S7 Edge, S8/S8 Plus and Qi-enabled devices from Google, Microsoft, LG, HTCand Motorola, Sony, and Blackberry. Scosche does note that the Galaxy S9 and Galaxy S9+ have a camera positioned in such a way that it requires the first generation MagicMount Charge rather than this product. 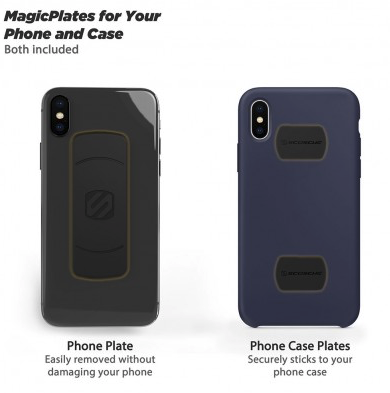 If you are not using a case like the one, I am reviewing from Speck that has metal plates built into it and located properly for mounting and charging you will need to add a MagicPlate to the phone or case. 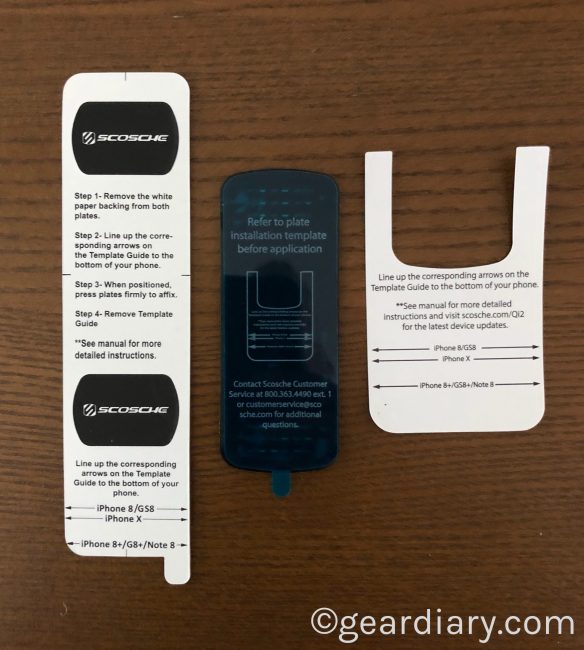 The company includes two of these, a Phone Plate and a Case Plate, as well as template so you can position them properly for both mounting and charging. This is exceptionally important since mounting the plates improperly will interfere with the wireless charging functionality. To aid in this, Scosche created a MagicPlate Template Guide. Positioning the plates is a simple process if you follow the instructions and properly employ the template so it is worth taking your time to do it right.

Scosche notes that their mounting plates are NOT recommended for use with wallet-style cases. This should be obvious since the addition of a wallet at the back of the phone will place too much distance and, possibly interference, for proper charging.

When I first received the review sample, I set it up on my desk for testing. Since I have one of the Speck cases that were created in partnership with Scosche, I popped my phone into it. The MagicMount immediately grabbed my iPhone X and held it in place. Once I plugged the mount into a wall adapter, I could see the phone charging. I was impressed.

I went out to my car and played with various positions for the mount. I found that mounting it to the windshield not only obstructed my view but it also out the phone too far away for easy access. I tried placing the small mounting plate on the screen that is in the middle of my dashboard. It seemed like the right position so I followed the instructions for cleaning the surface and attaching it with the adhesive preinstalled at the back. I then attached the mount and plugged it into one of the power ports in my car. It worked great. The phone was held at an ideal position and it charged as I drove. Unfortunately, after an exceptionally hot day, I came out to my car to find that the adhesive has released and the mount had fallen off. 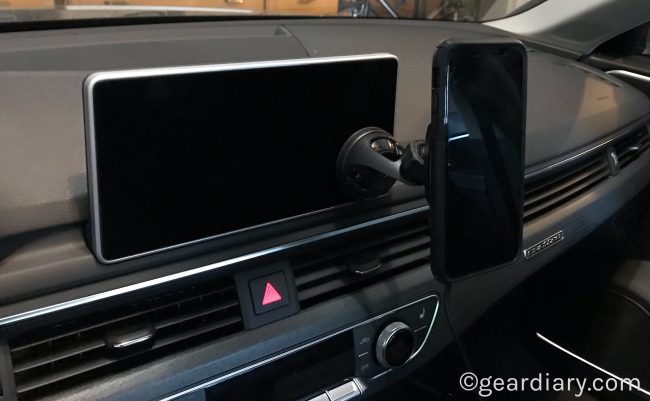 I got the suction mount and used it in the same location that I had placed the small adhesive piece. Because the dashboard screen is glass, the suction mount grabbed on immediately. It has been there ever since.

Now, when I get in my car, I pull out my phone and place it on the mount. There no fuss since placing the phone in front of the mount immediately results in it being held in place. Now, I always know where my phone is when I get to my destination better still, I always have a phone that has been topped off. I will admit that, on one occasion, I hit a bump while driving and the phone fell to the floor but that was only one time in over a month and I suspect I had not placed the phone on the mount properly. That one time aside, I can not recommend this $59.99 product enough.

What I Like: Easy to set up; Includes two ways to connect your phone and can also work with cases such as one from Speck that is specially designed for this system; Holds the phone in landscape or portrait; Offers quick charging of 10W; Has safety technology built-in to avoid shorting or overcharging

What Needs Improvement: Small adhesive mount failed in the head; Phone fell off once but that was likely user error