The Parrot Zik 3 are a pair of Bluetooth headphones that were heavily talked about during CES 2016 due to their great sound and even better build quality, so when the company sent me over a pair to review I was not surprised at how marvelous the headphones themselves would be. 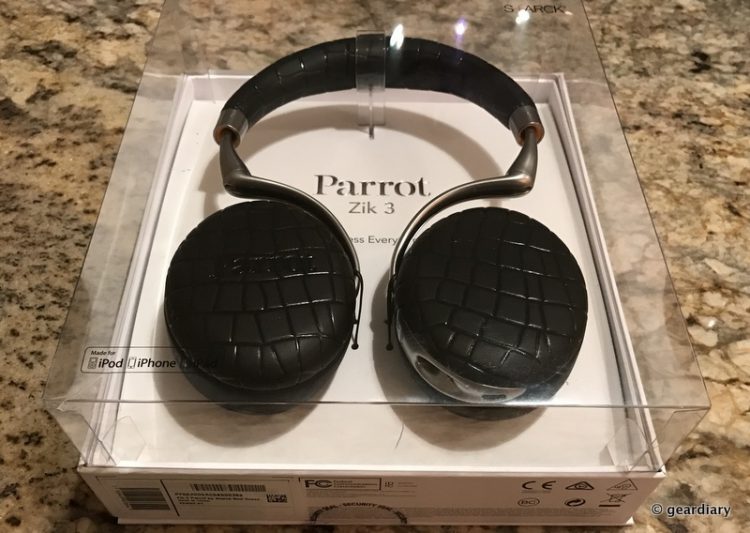 Parrot sent me over their Zik 3 ($399.99) in a black colorway and two weeks later, I’m still stunned at the product. Available in various colors such as green, red, tan, brown and blue, you can tell that the headphones themselves were styled to fit a variety of personalities. I tend to go for black with most because it just works well across the board, but if I had to do it all over again, I’d definitely go green. Outside of the fancy colors designed by Philippe Starck, the question you have to ask yourself is “Are they really WORTH $400”? And that’s what I’m hopefully here to answer for you. 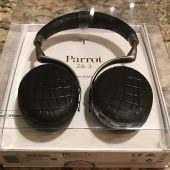 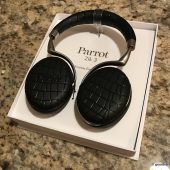 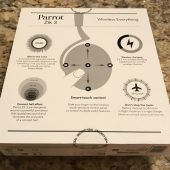 Pretty much designed like the prior Parrot Zik 2, that Parrot Zik 3’s add a little bit of flair and features that are worth the upgrade if you can set aside the higher price tag. There’s a nice cross-cut stitching to the Zik 3’s that is not only subtle but makes the Zik3s look unique so you can differentiate them from the Zik 2’s without worry. On one ear cup, you see parrot’s unique labeling as well. 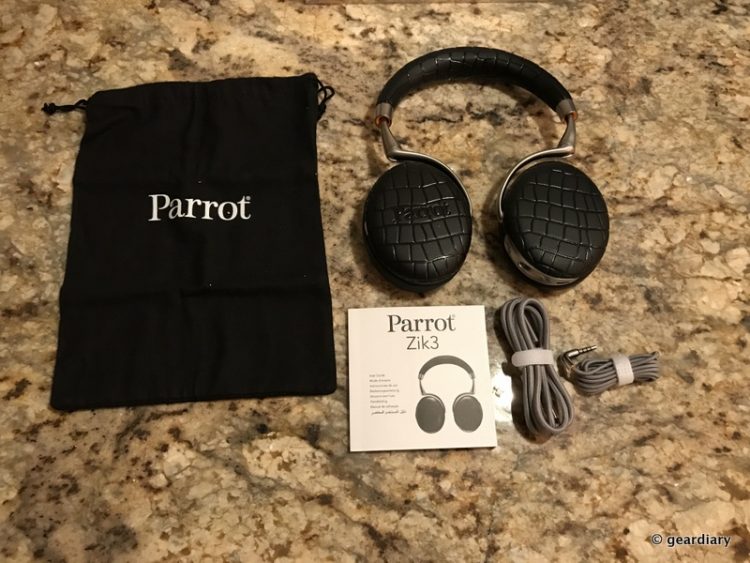 Inside of the box, you’ll receive a soft textured carrying pouch that you can use to keep the headphones protected when thrown in a bag. A microUSB cable which is used to charge the device in order to make it Bluetooth compatible, but also doubles as a means to actually listening to music on your laptop as well as syncing and updating the Zik 3’s.  A 3.5mm headphone jack which cable is long enough to tuck under a shirt as well as pocket for a commute which I thought was pretty nice, considering how many brands give shorter cables that are not. The instruction manual comes included with multiple languages and there is a nifty removable battery. I was actually pretty surprised to see a battery for a Bluetooth headset, at least OUT of the headphone itself, but it’s nice that Parrot though of this in the event the battery (eventually) dies completely, you can always replace, which means the headphones will actually last you longer than the standard 3-4 years… or you know, whenever you buy the Zik 4, whenever that comes out. 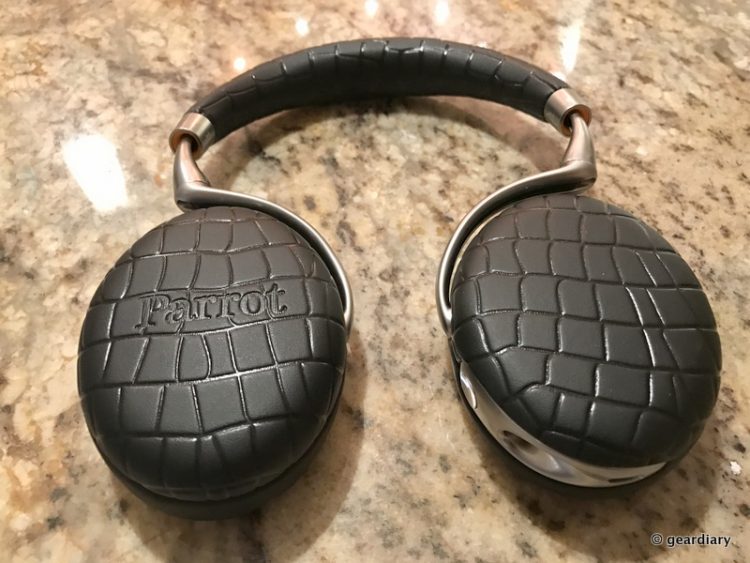 The headphones themselves are an oval shape, which fit pretty snug on the ear, and that could be a bit of a good or bad thing. I have an earring in one ear, and simply put, it tends to dig into my ear a bit with the headphones. It’s not an isolated thing with just the Zik 3’s, but all oval headphones seem to be this way for me. It’s not a major problem, but it’s something worth noticing if you wear studs, or larger earrings on a daily basis. 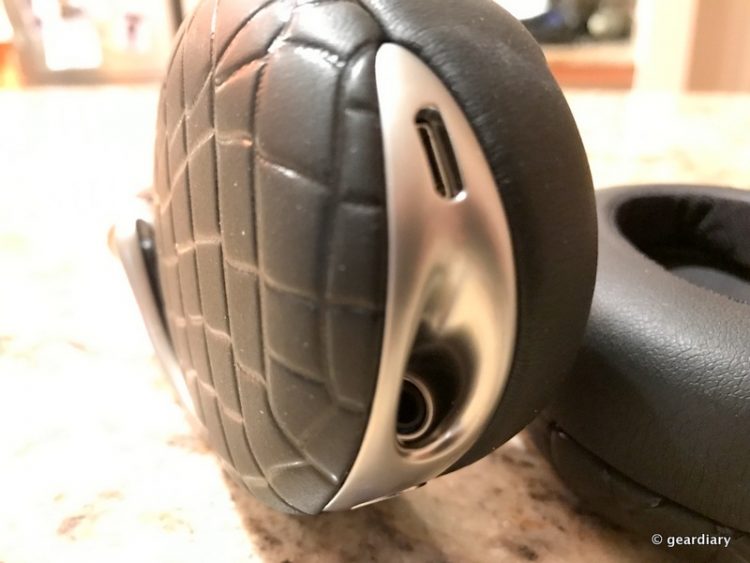 At the base of the ear cups houses the 3.5mm headphone input as well as the MicroUSB port sitting underneath the power button. There are no indicators to show you exactly how much battery remains which but it’s worth mentioning that the Zik 3’s can connect courtesy of Bluetooth 3.0 for a solid audio flow that won’t cut out on you like other headphones out there.

Parrot actually included NFC compatibility which makes pairing a breeze for anyone with an Android device. This courtesy isn’t extended to Apple’s “Airdrop” feature which is a bit of a bummer considering that a lot of the features of the headphones could double for iPhone, but maybe in the next edition. The Zik 3’s feature comes at a price, though, due to you having to purchase a Qi-compatible charging pad. Parrot actually does sell a wireless charging pad that I saw online but unfortunately, I did not get in the review unit that I received. 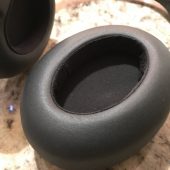 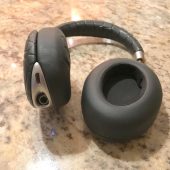 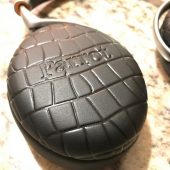 The listening experience is pretty awesome, minus a few minor details which can again be good or bad, depending on how you look at it. While audio quality when listening is awesome, if you gesture to move one ear cup away from your ear (more specifically the sensitive right ear) to order to hear someone talking or just simply to adjust the Zik 3’s, the audio will accidentally pause on you. The upside is the music will randomly continue automatically once you place both firmly back on your ears, but this doesn’t happen every single time. Parrot actually states that the Zik 3’s can sense when you remove one or both headphones from your ear which in theory could be a good idea, but if you have a habit of listening to music at your desk with one headphone cup behind your ear instead of on your actual ear, just be mindful it may cut out on you.

Like I was mentioning above about the right ear cup being more sensitive right ear cup, this one in particular is where the magic happens with the Parrot Zik 3. Like the UrbanEars Hellas I use in the gym, the Zik 3’s have a gesture based system versus physical buttons which give it a seamless and classy look to it. Being able to swipe to make these gestures just feels right, even when your finger goes over the Zik 3’s stitching, although it felt a bit unnatural the first time I tried this. Swiping up or down controls the volume, left/right will get you to your previous or next track, and simply pressing the center of the ear cup is the play/pause feature. If you are fan of not having to pull out your device in order to  change a track on a long flight, or even just on your commute to and from, this is by far a feature you’ll appreciate more than anything else. 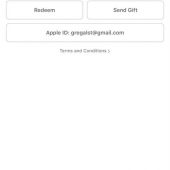 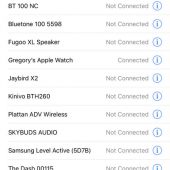 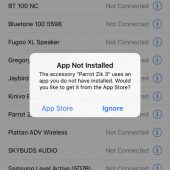 But the best part of the Parrot Zik 3 hands down has to be within the Zik mobile application. Available for Android or iOS, the Zikapp allows you to more closely monitor exactly what sound your Zik 3’s put out. With features such as an equalizer, battery life monitor, and even the ability to enable or disable the active noise cancellation and they all work pretty well.  Being able to adjust the presets to your liking, more specifically the equalizer, you can get the sound YOU want to hear by just maneuvering your finger around the center of a circle to get variants such as “Punchy, or Vocal” depending on how you want your audio to sound. This is more helpful if you listen to a particular type of music, though. If you tend to have a variety of tunes on you, your results may vary. 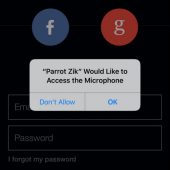 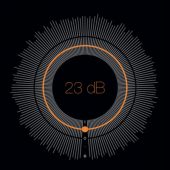 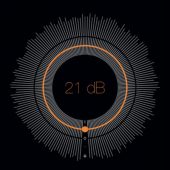 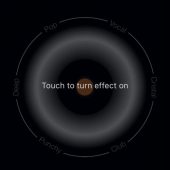 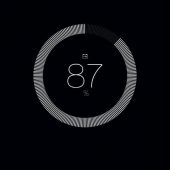 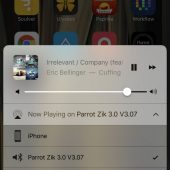 If you want to have a more surround sound to your headphones while limiting exactly what’s in the background there a feature there too which will allow you to choose your noise level from a ‘silent Room” all the way to a “concert hall”, which at that point the robust noise cancellation kicks in.

In the event you do decide to save your Zik 3’s battery, you can actually just plug the device into your tablet or smartphone (if it has a 3.5mm headphone jack). Unfortunately, there’s no Lightning port for the Zik 3’s so if you’re an iPhone 7 user you’re stuck either in Bluetooth or using an adapter. Either way, your audio quality is top-notch. More bass heavy tracks such as Meek Mill’s “Litty” sound great on the Zik 3’s, with heavy bass, the vocals even at a high level aren’t drowned out or muddy, giving you the crisp sound experience you’d expect. But across the board, these are one of the best pair of headphones I’ve placed on my ears in terms of music, and I’ve heard a LOT.

In terms of battery life, this is just another added bonus of the Zik 3’s. You can get about 7.5 hours of battery life on these with a single charge, which is more than enough for a long flight or a week of randomly picking them up and commuting to and from work. I typically turn the ANC (Active Noise Cancellation) off because it’s really not necessary to me, but when on I have noticed that the battery life can actually still be roughly six hours with this feature turned on, which is nice. All else fails, you can purchase an extra battery or two since they are interchangeable which is great if you’re traveling internationally and want peace and quiet from the surroundings. If you decided to go the route of using the included 3.5mm cable, you can get 15+ hours of ANC which is nice, but trust me, you’d much rather just go wireless with the Parrot Zik 3’s.

Overall, for a Bluetooth pair of headphones, these might be my all time favorite pair. They are not only comfortable to wear for HOURS courtesy of a creative ergonomic design, but with a lengthy battery life and a more than competent app that doesn’t just give you basic features, the Parrot Zik 3’s might be expensive, but i promise you, these might be the last pair of wireless headphones you need to purchase for a while.

For more information on purchasing the Parrot Zik 3, you can head over to Parrot today.

What I Like: very comfortable to wear, audio quality and the app is top of the line

What Needs Improvement: Possibly include a lightning cable cord for iPhone 7 users who don’t want to go wireless all of the time