One of the worst problems I have when I have friends over is them using every outlet in my house. Having to step over cords and having to find multiple USB ports gets tired really fast. So thanks to Satechi, I may have found a solution for too many devices. and not enough outlets.

I’ve thrown quite a bit of fight parties, as well as had plenty of friends come over just to hang out. Just off-hand, I know my girlfriend and I have a host of friends coming over to watch the Game of Thrones finale this coming Sunday. And folks will want their phones charged. Now myself, I typically have to charge my iPhone 6 Plus, Nokia Lumia 1520, a backup battery charger, and my iPad Mini Retina. Normally that would take about four outlets up, or if you go somewhere like Costco or Best Buy, you might find a dual-USB outlet. That’s nice to have as well, but sometimes you need just a little bit more.

Recently I had the chance to use Satechi’s Seven-Port Multi-Charging Dock, and honestly I love it. Currently the multi-port dock sits in my living room for when I have guests over and there is both good, and bad to it. Let’s start with the bad. 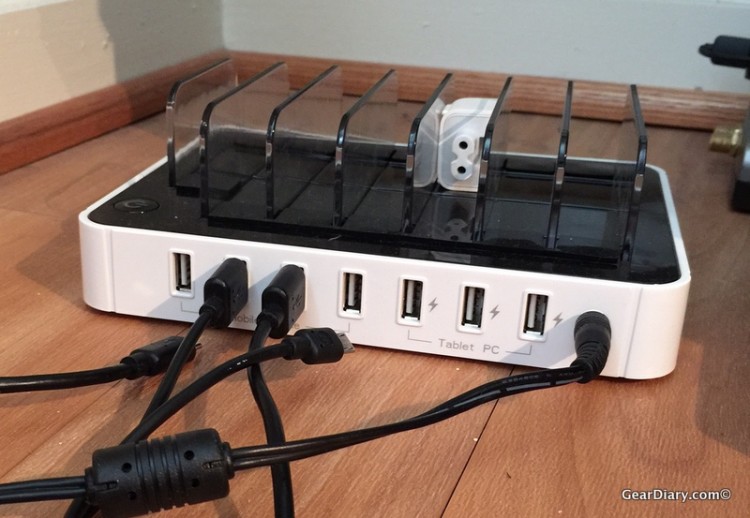 Upon opening the box I must admit the dock itself is a bit clunky. From it’s glass panels separating each individual device you charge, it can tend to be a bit much to look at in your living room area if you don’t have a place to store it where it doesn’t just stand out. In my apartment I do not really have such a place so I sat it next to my standing Bluetooth speaker. The dock itself has three 2.4A ports (for tablets but I use this for my iPhone 6+) and four standard 1A ports for your smartphones and your Apple Watches (or Android watches if that’s what you’re into). The space between the each dock is VERY small to say the least. If you have a clunky case like an Otterbox, expect for it to sit snugly, but not without little effort to sit in properly. 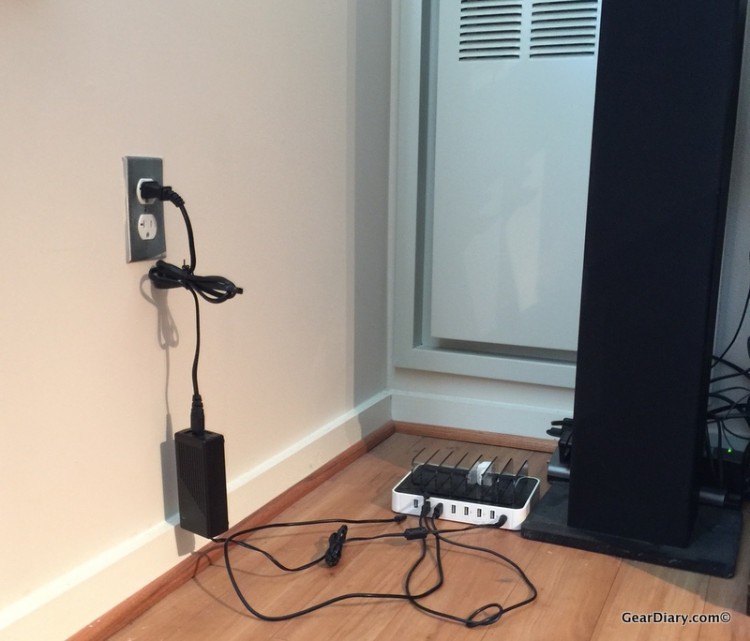 A big thing about it that I did not like however is the cording functionality. Since the dock features the USB plugs being on the right hand side of the device, this dock is meant to sit somewhere like a nightstand, or somewhere that the cords can actually hide. With standard USB or Lightning cables being about 6″ long or longer, having the cords sit on my floor made EVERYTHING look junky. Since I do not always have seven devices what I did was I attempted to charge the following:

ALL OF THE CORDS! Having not one, not two, but SEVEN cords lying around did NOT make the girlfriend happy, at all. She and I are a bit particular with neatness in our home, and since the Satechi sat on the floor, it began to look less “productive” than it’s supposed to. Although you can possibly find a short 2-3″ cord in USB cord for devices that will make it look less cluttered, I would’ve liked to have the USB plug installed IN the dock itself, that way you can truly “dock” the devices. The current set up isn’t essentially a dock. It’s a hub that organizes your charging devices. The fact that Satechi didn’t include some short cords, which you can find on Amazon separately for $8, (there’s a MicroUSB option for 10-packs as well) but that’s extra money you’d have to spend. 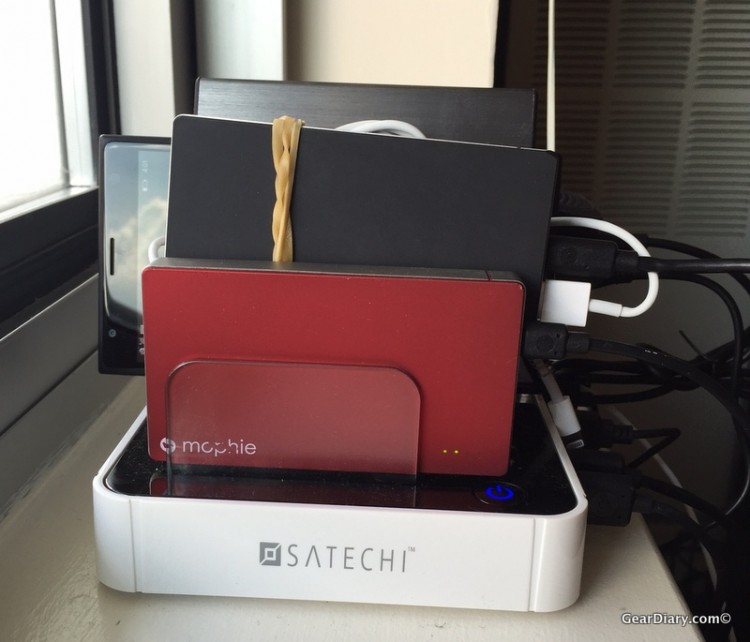 What’s good though is the fact that yes, it does charge all of your and your friends devices if they come over and you don’t want them asking “Hey, can I use an outlet?”, you can just point them to that beautiful dock of yours. Which in turn means you don’t have to worry about having 1,000 different little white blocks lying around, or if you purchase separate short cables that are color coordinated, a friend will not leave your place with your cord (everyone’s been there before). 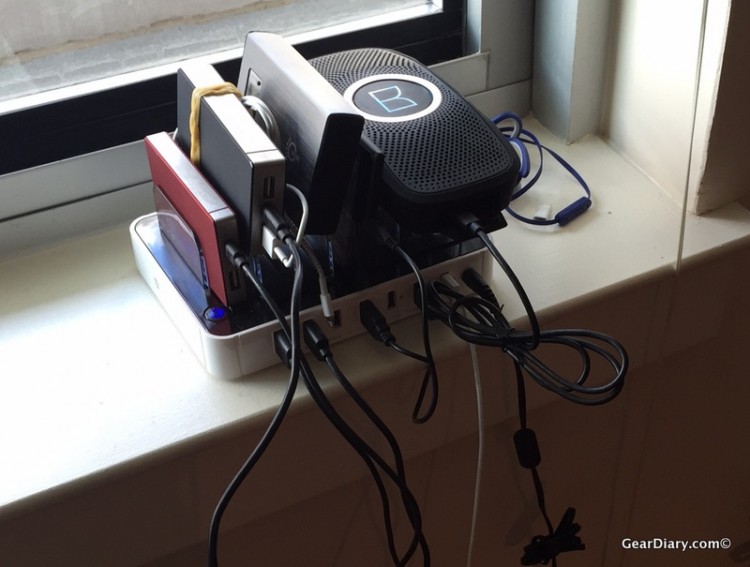 Overall, this isn’t something everyone MIGHT need, but it’s certainly something that you could use, in the event you have two or more of your own devices. Please note that battery packs may or may not fit in the dock slots, which means you’ll end up sitting them on the side, or on top of another smart device. 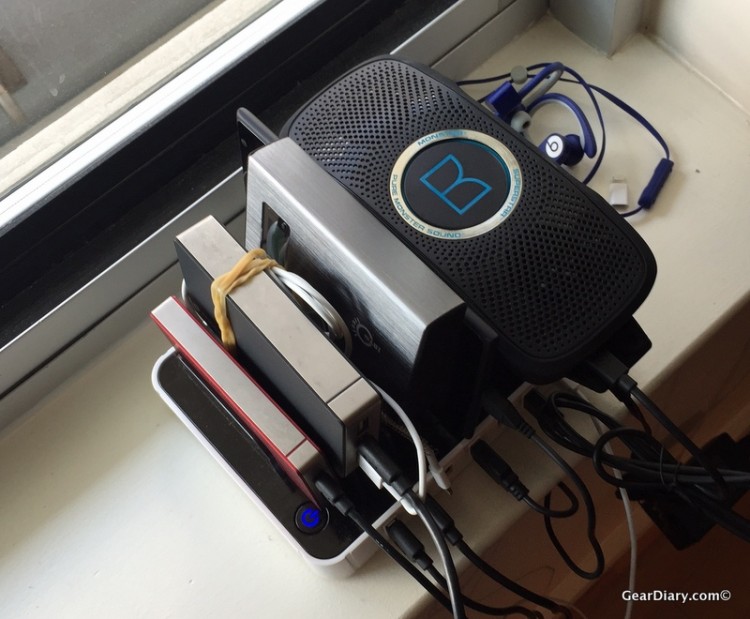 If you’re interested in the Satechi 7-Port USB charging dock, you can pick it up in two different colors, black or white for $59.99 through their website.

What I like: Seven Ports? Yes. I’ll charge everything. Even my PlayStation remote. Just because.

What Needs Improvement: Spacing on the dock for Battery Packs would be nice. Also, in the next model, maybe include some USB cables for the most popular devices (MicroUSB and Lightning)