If you live an active lifestyle and hate wired cables, you should actually check out LG’s Tone Active+ Stereo Bluetooth headsets. The follow-up to LG’s popular collared headphones the LG Tone Active, how much more of a “plus” can the Tone Active’s be in the wireless headphone market? 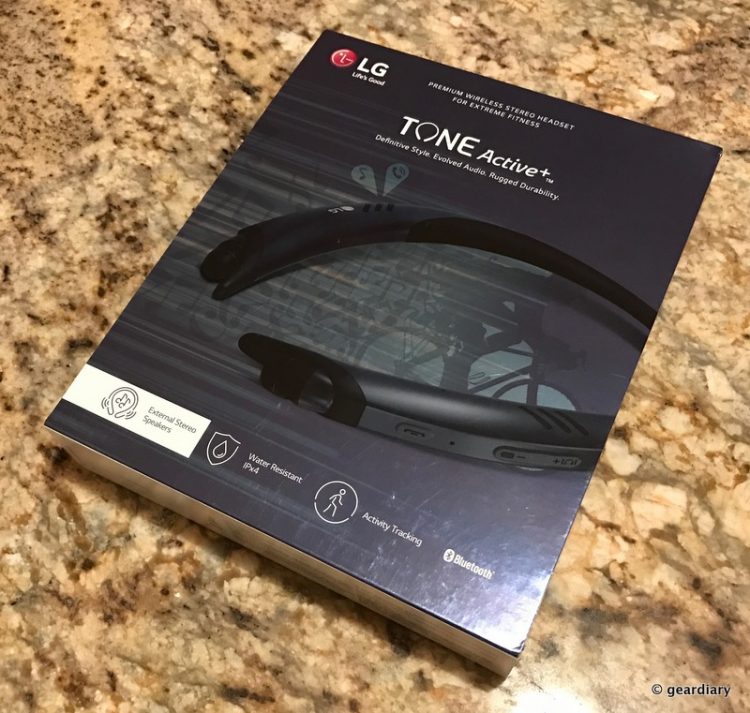 Chances are you’ve seen someone out in public wearing a pair of collared headphones and thought to yourself how foolish they look, with the collar bouncing up and down on their neck as they walked, but little do you know, these type of headphones are not only super discreet if worn properly, but can be great for any activity. LG sent me over a pair to check out and I have to say, the LG Tone Active+ might be my go-to commuting headphones, as well as my daily gym headphones going forward.

The headphones themselves take a slight change from the other’s you may have seen in your favorite cell phone providers store or a Best Buy, and that’s certainly a good thing. Older models of the LG collar headphones and other brands alike took the approach of making headphones that wrapped around your neck and the cable for the earphone itself was completely separate from the base of the collar, making them look and feel a bit awkward. I can comfortably say after plenty of complaints about this design, LG has finally gotten themselves a pair of headphones that can put to shame those wireless, behind-the-ear headphones possibly for good. Here are a few specs on the LG Tone Active+:

Inside of the box, you’ll get the LG Tone Active+ headset which I received in the Blue Black colorway. They are also available in Silver and traditional black. Also in the box you’ll get your standard USB charging cable, an extra set of ear tips (small and large) and even some stabilizer tips which are great for going on a run or an active workout where you will be moving around quite a bit.

The design is pretty cool, looking a lot more streamlined and dare I say “cooler”? The buttons on the LG Tone Active+ are actually all on the side which makes a hell of a difference compared to the competition. For example, if you’re in the gym doing squats or pushups. With the physical buttons being raised on the top of the headset, you can occasionally bump your shoulders and neck into the buttons causing your music to pause or skip tracks in error. So it’s nice that LG was forward thinking in this regard. While the first few times you attempt to change the volume or track will be odd, muscle memory plays a factor here and after 2-3 times, you’ll learn where your buttons are. Speaking of those:

On the left side of the device underneath the LG logo is where you will find three sets of buttons. First at the top is the HD button signifying you’re getting high-definition sound which takes full advantage of awesome audio quality the Tone Active+ bring. Underneath that is where you can toggle between tracks. Finally, there’s the play/pause button. When the headset it on your head, this will be to the right-hand side.

On the other side, being controlled with your left hand would be from top to bottom: The USB charging port which is charged by Micro-USB, volume control underneath that , and finally a call/end button that is completely separate from the play/Pause button which is wise thinking on LG’s part.

The highlight of the LG Tone Active+ HAS to be the active lifestyle experience. I’m a huge fan of running outdoors (when the weather permits), and sometimes in-ear headphones can be restrictive. They frequently fall out of your ears, they get sweat in them, just overall not a great experience for a distance run. LG thought about this and actually included an active in-house speaker unit so while you’re on a run you can actually listen to your music without needing to put the earphones in. The sound is equally as impressive as wearing the ear tips in, although you might disturb the person beside you on the train if you decided to use this nifty feature.

Also while on a run, I noticed a significant change in the LG Tone Active+ that I have yet to see in other brands. Unlike the others, the LG Tone Active+ seem to fit a bit more snug that it’s competition. This can be a good or bad thing depending on your neck size, but for me it’s perfect. While they can obviously adjust to fit a larger neck, I tend to find most companies that make collared headphones make the headset longer or wider, which can be detrimental while working out. With the Tone Active’s I don’t have nearly the same need to adjust one side because it’s misaligned or not sitting equally on my neck, so this is a huge bonus with the Active+.  Other than that you can actually be up to 25 feet away from your phone without getting the annoying beep that you’re out of range which was nice to know that I can actually go and play basketball at my local gym with my phone in my gym bag without having to have the phone directly on me, all without it cutting out as I get further away.

In terms of audio quality, the sound is excellent. When making phone calls, I’ve asked others how well they could hear me, since the earpiece and where you actually speak into are a couple of inches apart, and even on a windy day my voice didn’t get drowned out by the elements on a phone call. Even when using the external speakers, I was not only able to hear the person on the other line clearly, but I could be heard as well. In terms of music, the LG Tone Active+ bring the noise. While not the loudest headphones I’ve ever used, the Actives can easily get you through a workout at a crowded gym or a commute on a crowded train without feeling like you’re swimming in the audio and cannot hear your surroundings.

Overall I’ve been completely amazed by what LG’s brought to the table with the LG Tone Active+, and they have come a LONG way from just being those headphones that everyone though were for that “blue-collar guy or soccer mom” that is attempting to transition from having a Bluetooth earpiece sitting out of their right ear. They are a perfect gift to get anyone, including yourself, especially if you’re active. And for $179.95, they aren’t the cheapest, but you certainly get what you pay for.

For more information on the LG Tone Active+ headphones head over to LG today!

What I Like: Do not slide around during workouts; external speaker is a HUGE bonus; call quality