Securifi’s Almond 3 Smart Home WiFi System provides expandable wireless coverage for your entire home while also acting as a smart home hub and home security system. The complete system comes with three Almond 3 routers, all of which have touchscreens for simple setup and maintenance and starts at $399.99. It’s an impressive combination of router, home automation, and security.

The Almond 3 system sets up a mesh WiFi network throughout your home, meaning that it uses an expandable number of routers to blanket your home with reliable coverage. One Almond 3 will be enough to cover most 1,300 square foot homes, two Almond 3s will be enough to cover homes up to 2,600 square feet, and three or more Almond 3s should be used for homes anywhere over 2,600 square feet. There are a couple of features that sets the Almond 3 apart from other mesh WiFi systems. First, each router has a touchscreen, which allows you to set up the router and adjust the settings of the router from the router itself. Second, the Almond 3 WiFi system is a smart home hub, which is compatible with ZigBee accessories and Amazon’s popular smart assistant, Alexa.

The Almond 3 not only allows you to control your lights or other simple smart home devices, it also allows you to set up a home security system. Each Almond 3 router has a 100-decibel siren built-in, so that when one of the door/window sensors or motion sensors is tripped, all of your Almond 3 routers will sound at once. This will deter potential home invaders, however, you should note that this is not a centrally monitored system, so the police will not be called automatically when your Almond 3 alarm goes off.

Each Almond 3 is equipped with a dual-band antenna, for 5 GHz and 2.4 GHz using the 802.11 a/b/g/n/ac wireless standard. The routers are compatible with WEP, WPA, and WPA 2 security. Each Almond 3 can be used as either a wireless router, range extender, or access point and has 1 gigabit WAN port, 2 gigabit LAN ports, and 1 USB 2.0 jack. The Almond 3 is also equipped with a small stylus that can be used with the small touchscreen for better accuracy and is stored in a special holster in the router itself. 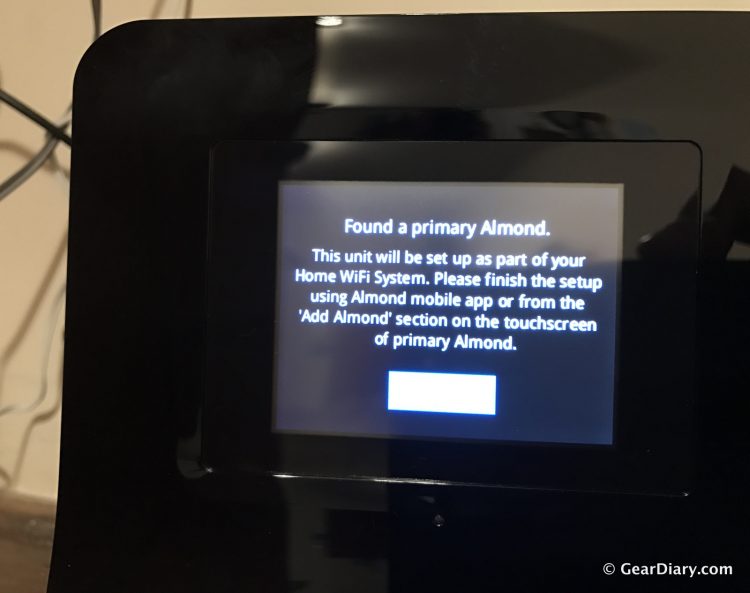 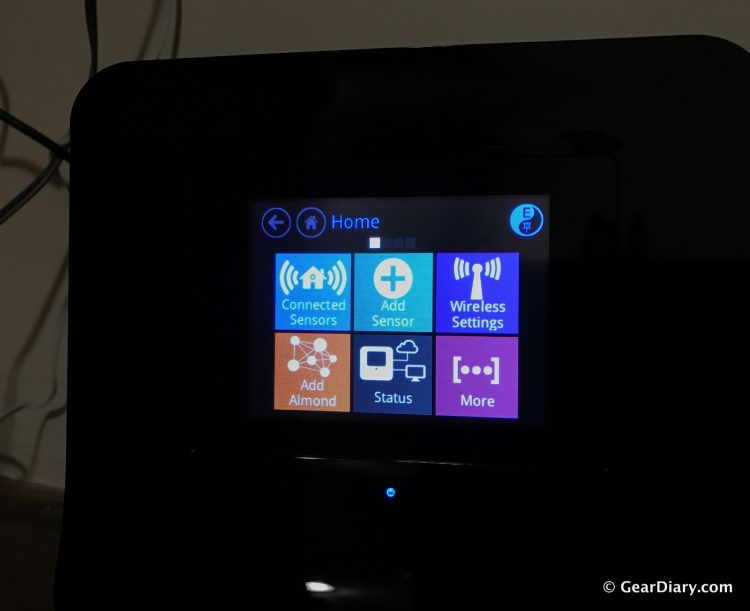 The Almond 3 is also compatible with the free Almond app for iOS and Android, which you could also use to help set up the Almond 3 system. The Almond app also helps you adjust the settings of your WiFi system if you don’t want to use the built-in touchscreen on the Almond 3 routers. The Almond app is helpful because it can notify you when a new device connects to your WiFi network, allowing you to be sure that no unwanted guests are hogging your bandwidth or spying on your data. Within the app, you can also manage all devices on your network, change the WiFi password, create a guest network, reboot the routers, and create/modify “scenes” for use with your smart home accessories.

Check out the screenshots, below, from the Almond iOS app: 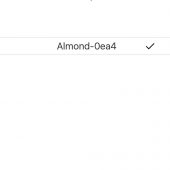 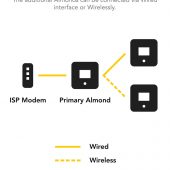 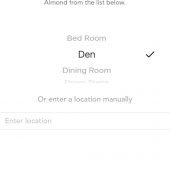 My experience with the Almond 3 WiFi system was relatively uneventful, which is a good thing for a WiFi system. Other than the slight hiccup while setting up the 2nd wired router, I had zero issues while testing the Almond 3 WiFi system for about 3 weeks in my home. I was getting the same WiFi speeds that I was getting with our previous Apple Airport Extreme and Eero setups, at around 30 mbps up and down. Adjusting WiFi settings is easy, and it was nice getting notified when new devices connected to the WiFi system.

If you’re wondering how the Almond 3 WiFi system stacks up against Google Home or Eero, check out this blog post from Securifi, comparing the three options in cost and features.

You can but yours now from Securifi’s website, starting at $399.99 for three Almond 3 routers.

What Needs Improvement:  Some minor setup hiccups, but no major downsides