I love having a home that is increasingly “smart-enabled.” We have two fans with light kits, a Thermostat and an increasingly large number lights that are “smart.” All of it connects and is controlled through our Amazon Echo, but there are times when you don’t want to use your smartphone or voice for control. Enter the fantastic Logitech POP. 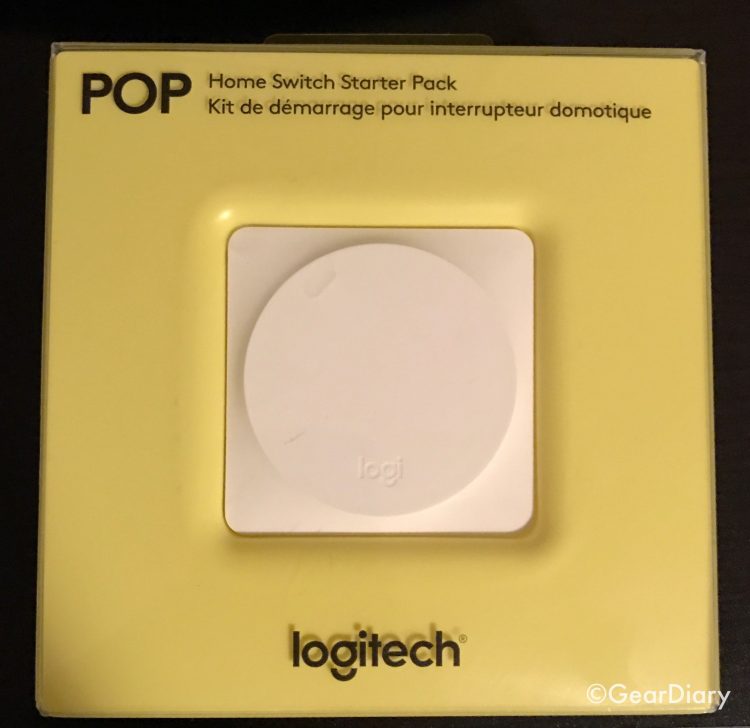 TheLogitech POP is a small square of plastic that comes in a variety of colors. It doesn’t look like much, but once you start to set it up and explore what it does and how it functions one cannot help but be impressed. As Logitech puts it,

OPEN YOUR SMART HOME TO EVERYONE: POP Home Switch lets everyone in the home control smart lighting, music, and more with the push of a button. Program each switch with up to three custom commands to add creativity and convenience throughout your smart home. 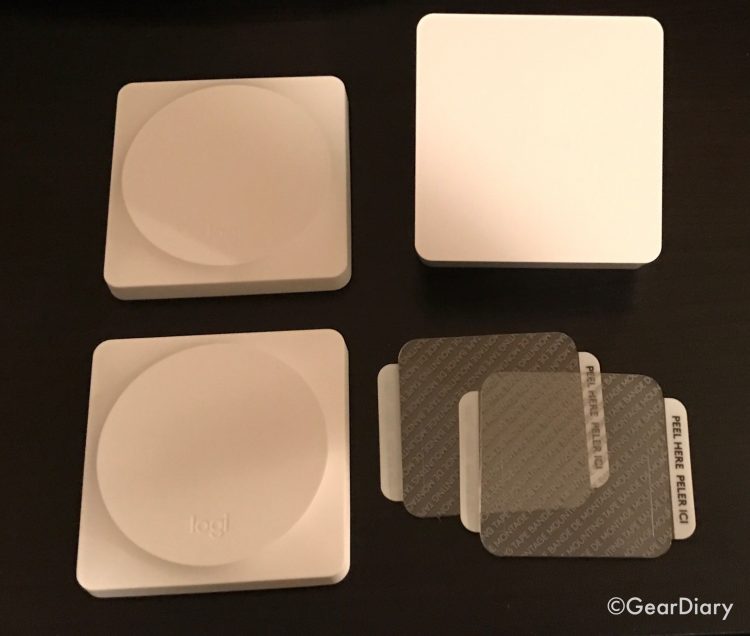 Inside the starter kit, you will find two POPs, a bridge, and two adhesive pads so you can install the POP pretty much anywhere you want without the need to screws and drilling. 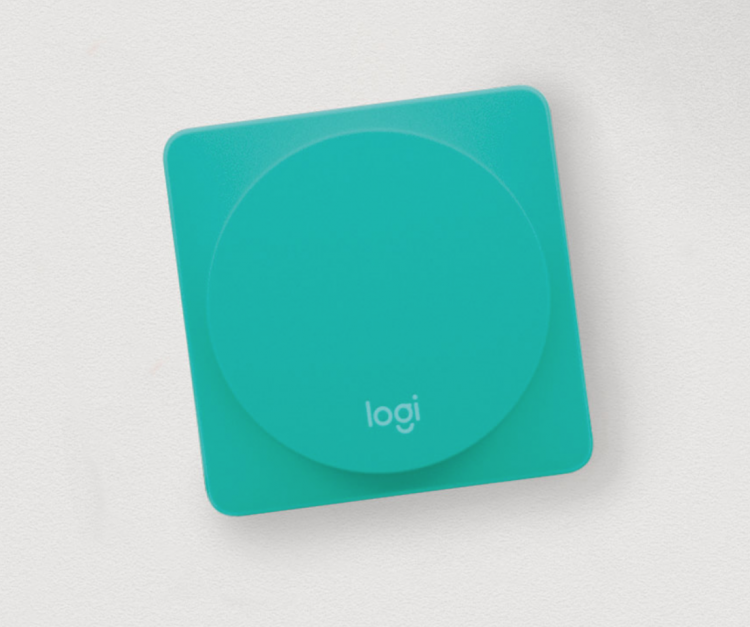 Each POP has a replaceable battery. That means you won’t need to throw out the POP when the battery runs down as you do with some battery-powered devices coming to market. And if needing to replace batteries scares you off … don’t let it. The battery inside each Logitech POP will last up to five years with typical household use. That means you can set up the POP and then use it without worrying about doing anything other than using it.

POP NEARLY ANYWHERE: Because each switch is wireless and battery-powered, you can use POP just about anywhere. Mount one by the front door, keep one on your nightstand, or carry one from room to room. Use POP Add-On switches to add simple smart home control wherever you like. 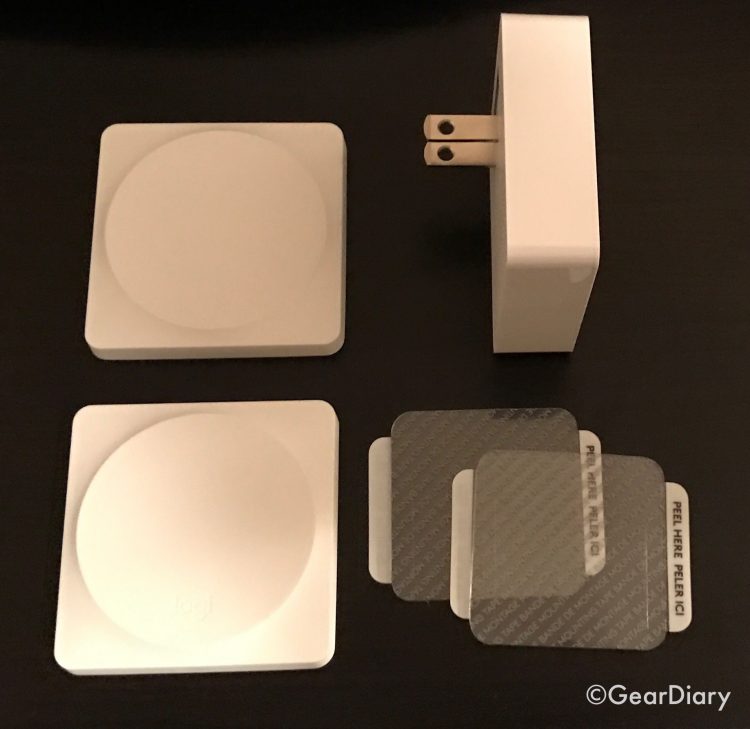 The Logitech POP ecosystem has three key components. There’s the POP itself. (The start kit includes two), there’s the POP bridge and there the POP app. The app lets you set up the system and, after that, you won’t need it unless you want to make a chance in how the POP functions. 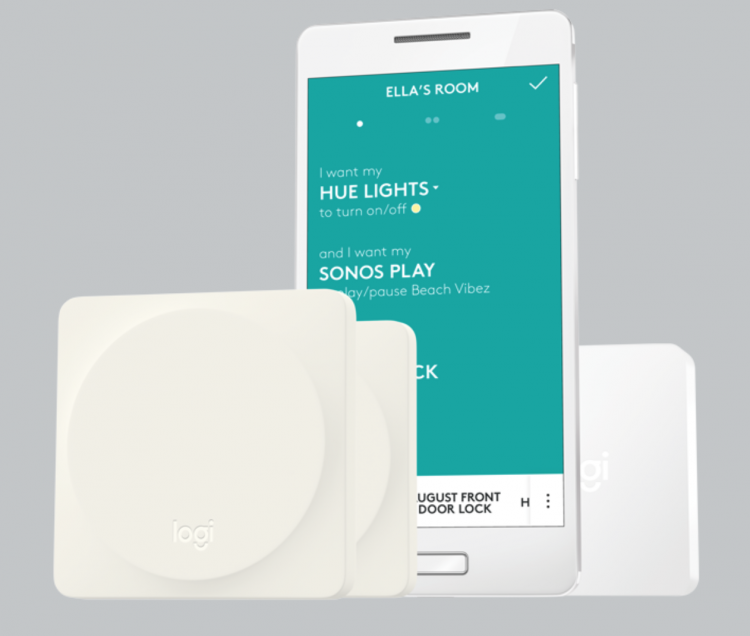 So let’s talk about the setup process. 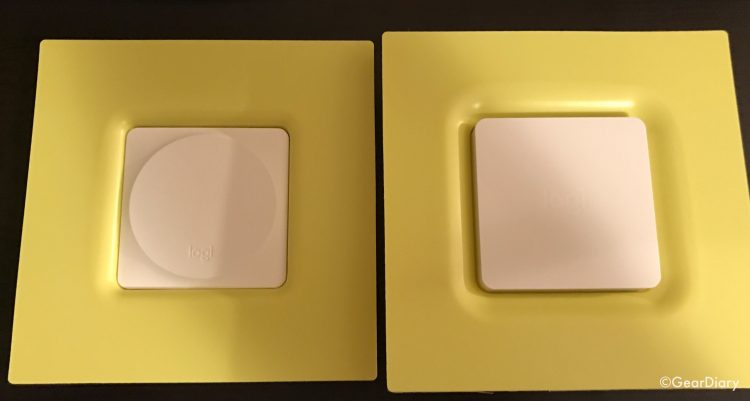 The Bridge is on the right. One of the POPs is on the left.

Step 2: Plug the POP bridge into a wall outlet you don’t need. It is small and unassuming so you won’t need to worry about it after that. 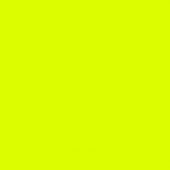 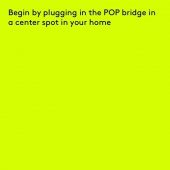 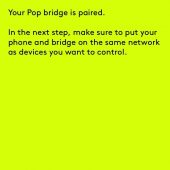 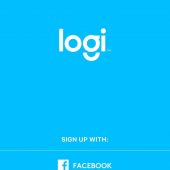 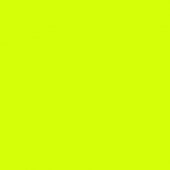 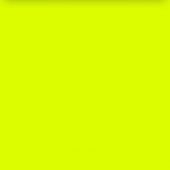 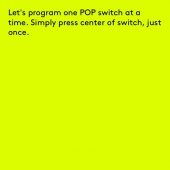 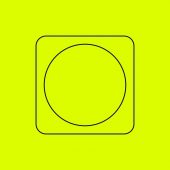 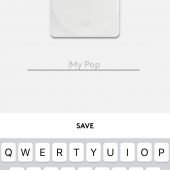 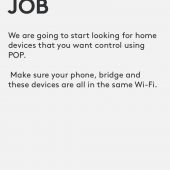 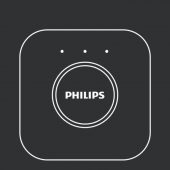 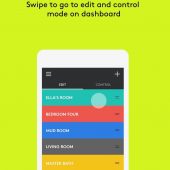 Step 3: Fire up the app, create or log into your Logitech account and follow the instructions. The POP app will talk you through step by step. Once you log into the account and begin the set up process you will work with each of the two initial POP devices. The app is so intuitive that you can actually drag-and-drop items in order to add or change the functionality of a POP home switch. The drag and drop process also means you can create a multi-device Recipe. (More on that in a bit.)

Step 4: Let the POP app scan for the devices that are currently available in your home and compatible with the system. POPs can pop a wide range of different devices. This currently includes Philips Hue, LIFX, August, Sonos, Harmony, Lutron, Insteon, and Belkin WeMo. POP can also work with the Logitech Harmony range of smart remotes. As Logitech puts it, you can “use POP as a shortcut to start or end Activities when combined with a Harmony hub-based remote.” (We will have a closer look at the Harmony Remote and its usefulness with the POP in a later post.) 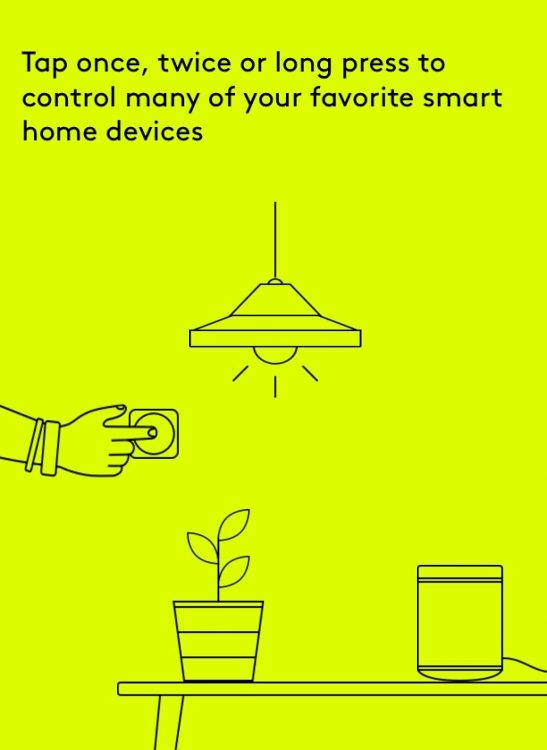 As you will discover as you set up and get POPping, each POP has is actually three controls in one. You can set it up to do one action with a simple press, a second action with a double press, and a third action if you press and hold the button. Best of all, because the entireLogitech POP is basically just a button, it is small and unassuming.

POPs can be attached to a wall using the included adhesive squares. They can be placed on or under a shelf by the bed. That’s what we did — I set up a POPs and hid it beneath the shelf next to the bed. That way I don’t see it — which isn’t a big deal since POPs are small and unassuming — and we simply reach under the shelf to initiate one of the three actions. You can also leave a POP free and carry it with you throughout the house so you have immediate control no matter where you are. That’s what I do with the second POP. It sits on the coffee table and controls the lights in the living room and hall.

Okay, all of that is nice but what does the Logitech POP actually do? Well, for example, we have a light in the living room that has two Phillips Hue bulbs inside. It is the light we keep on all the time when we are home. It is on full when we are reading or eating and it is somewhat dimmed if we are watching television. Normall we would control the light one of two ways. Either we say, “Echo, turn the tripod (the name of the lamp) on” or we open the Hue app on our phones or tablets. With the POP on the coffee table we don’t need to speak or fumble with a device. Instead, we simply press the POP once to turn the light on or off. We double press the POP to turn it to 50%. And we tripled press the POP to turn the hallway lights on or off. It is quick. It is quiet. And it works.

POP THE LIGHTS: Whether it’s movies, reading, or a party, POP makes it easy to match lighting with lifestyle. Use the POP app to configure your Philips Hue™, Insteon®, LIFX, or Lutron lights for brightness, warmth, and color—then enjoy simple push-button control.

The POP can, obviously, do more than just control the lights the way we do. For example, it can also be used to start a favorite Sonos station or playlist. For example, I could use the POP to start playing XM/Sirius FirstWave (best station ever!) with a single press of the POP. Then, with a double press of the POP, I could dim the lights and create ambiance. And again, this all happens silently, without a smartphone and all but instantly. 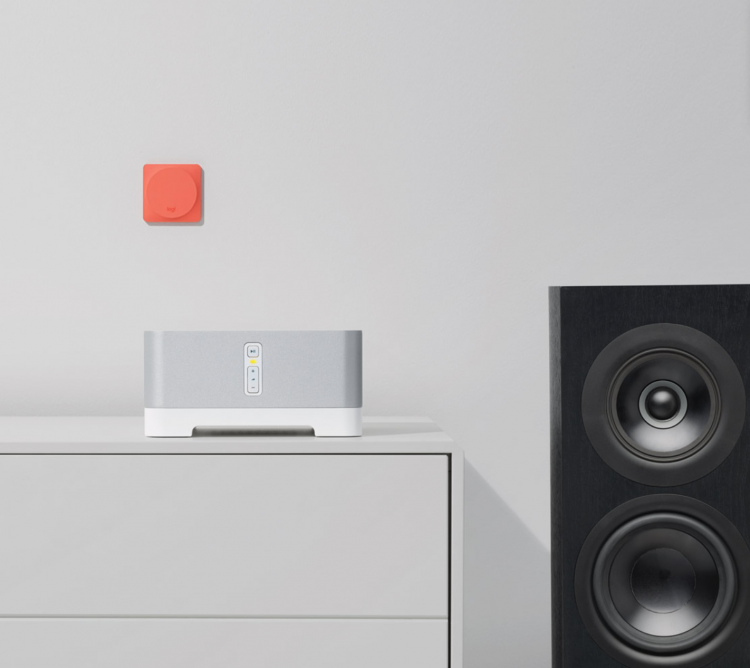 POP THE MUSIC: Program POP to play your favorite Sonos stations and playlists. Add lighting to the mix to create Recipes that instantly set the mood, from early morning waking up, to late night rocking out. 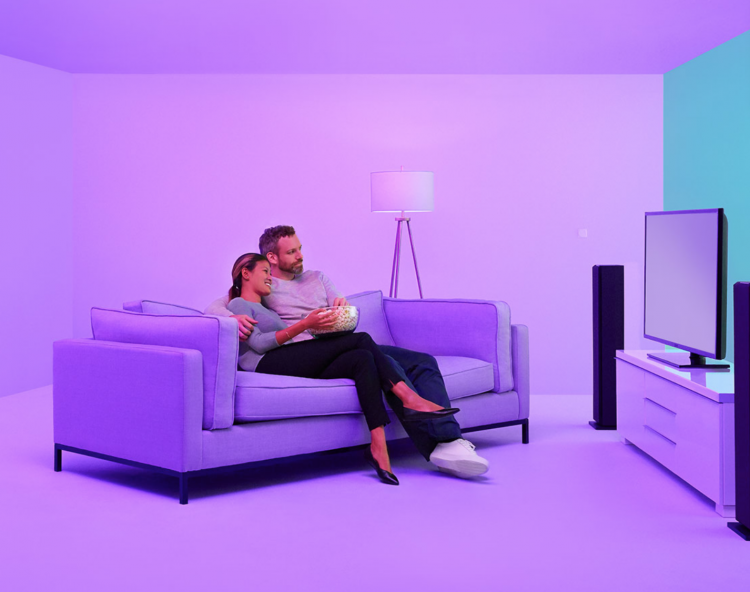 Both of those examples are Logitech POP 101 functions. If, however, you want to move into a more advanced approach to using the POP you can create a recipe that triggers multiple actions with each of the three types of presses. This is where the “recipes” come in. They let you slide a variety of actions into a single function and, when that action is activated, puts all the various components into play at the same time. Logitech explains the approach this way:

POP EVERYTHING, TOGETHER: Want to set the mood with lights AND music? Create Recipe combinations to trigger multiple smart devices at once, like setting smart locks and night-lights before going to bed.

So, with a single, double or long press of the POP, you can make a number of things all happen at the same time.

Finally, there the graduate level approach to using the Logitech POP. This one requires the use of the Logitech Harmony hub-based remote. And while I will focus on that in a different review, it is worth noting that Logitech highlights just how powerful this combination can be when they write the following: “…when combined with a Harmony hub-based remote, use POP to start an Activity like “Movie Night “– the TV, cable, and stereo turn on and smart lights dim.” 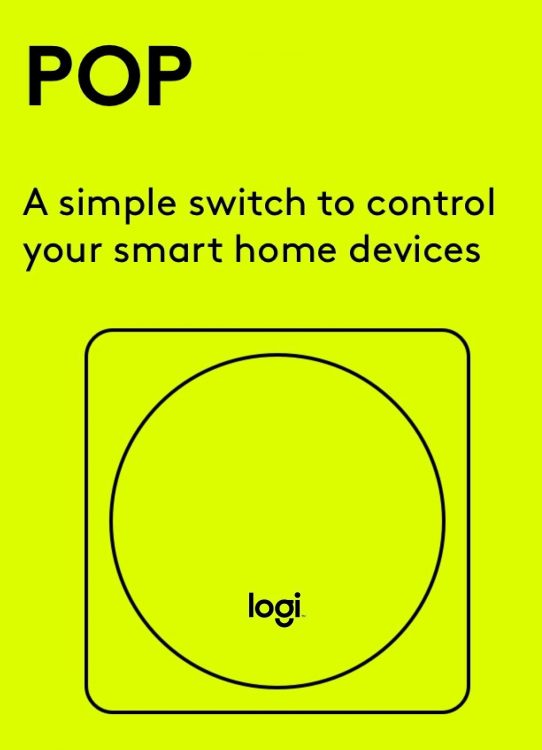 The POP Starter Pack includes everything you need to get your smart home popping. It includes two Home switches with battery, a plug-in bridge, two mounting tapes and user documentation. The app walks you through the entire setup and makes it easy to quickly be up and running. Trust me, though, you will want to take your time setting it up and then take even more time to play with the POP and explore its functionality. For while the Logitech POP may look basic, its simple, unassuming design belies a device that is exceptionally powerful. 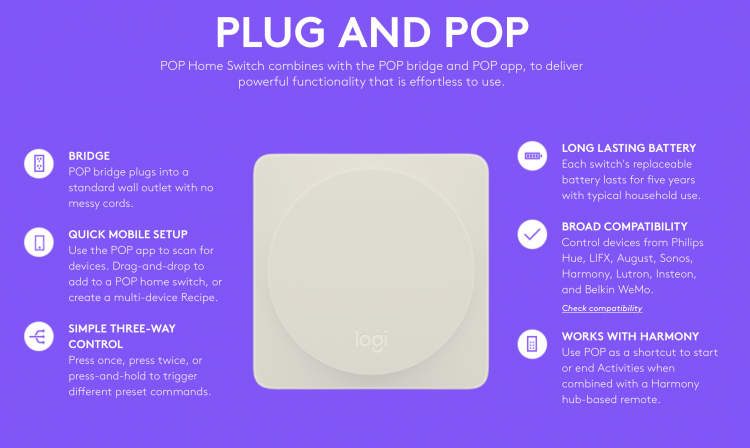 If like me, your partner likes the smart features of you home but misses the simplicity of simply being able to flip a switch to do such basic things as turn on a light, you are going to love the POP. And if like me, you enjoy finding new ways to make your smart home feature-packed, you are going to love the POP. I, for one, will be picking a few more up so that every room in the house is able to be POPped. Check it out here.

What I Like: Small and simple to use; Set up takes a bit but the app walks you through step by step; One POP can offer three different functions or series of functions; Works with a growing range of smart devices; Can be secured to a wall or table or be free-floating for control anywhere and anytime

What Needs Improvement: Nothing I can think of