If you have a 2016 MacBook Pro, you may want to consider picking up one of Belkin’s new Thunderbolt 3 Express Dock HD with Cable. The new Express Dock is fast. It is powerful. And, with just a single cable, it turns your MacBook into a desktop. At $349.99 it’s pricey, but it is a serious piece of hardware.

This new accessory lets you connect eight different devices with a single Thunderbolt cable. That makes it ideal for a laptop user who is looking to create a desktop environment and wants to keep things as simple and neat, as possible.

This new Express Dock is fast! How fast? Well, it can handle speeds up to 40 Gbps. That means the Thunderbolt 3 Express Dock HD delivers twice the 20 Gbps speed of Thunderbolt 2 and eight times the 5 Gbps speed of USB 3.0. In the real world, according to Belkin, that translates to being able to transfer a 4K movie in under 30 seconds or transfer 3 hours of 4K action camera footage in under 60 seconds.

Speed, however, is just part of the story. The Belkin Thunderbolt 3 Express Dock HD with Cable supports dual 4K displays (DisplayPort and Thunderbolt 3 (USB-C) so you can set your computer up for maximum productivity. But there is more! I had some different wall adapters for my last MacBook. They are useless now that Apple has made a move to USB-C with the current MacBook and MacBook Pros. I was about to purchase a second power supply so I could have one at home and a second one at the office. The Express Dock, however, makes this unnecessary. It can deliver 85W of power upstream to your computer. That, in turn, eliminates the need for an extra power supply.

So what does this new dock offer? How about all this… 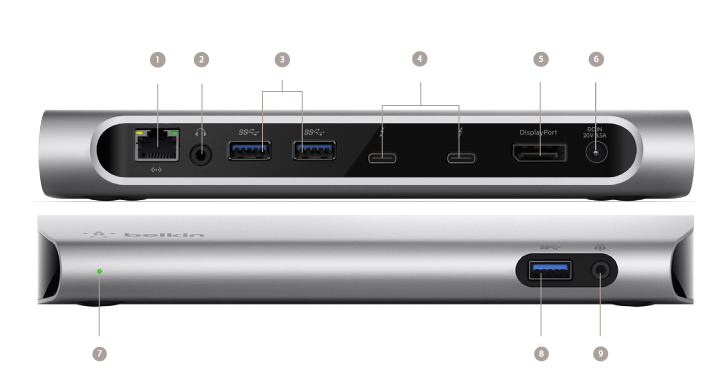 All this and it is still remarkably small!

You will have to use a Mac running Mac OS Sierra or later since the Thunderbolt 3 Express Dock HD is not PC compatible and the new dock is just shy of $350 but if you want one laptop to function as a laptop AND a desktop this is the solution you have been waiting for. Check it out here.