I purchased the very first speaker from Braven. It was decent enough, and since then the company has come a long way. Braven’s current lineup of speakers have style, sound great, and are built for the real world. This is especially true of new Braven Stryde 360 Bluetooth speaker. At just $99.99, this little waterproof speaker is impressive. 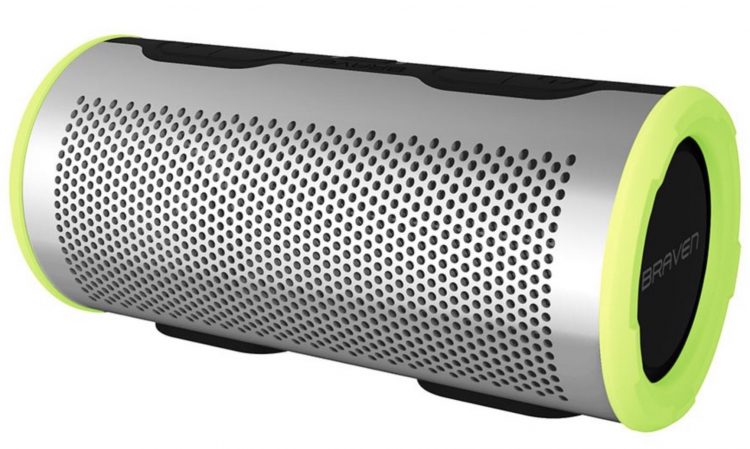 The Stryde 360 adopts a cylindrical shape so it can fit into cup holders and water bottle cages. It is a design we have seen previously coming from other manufacturers and it is great to see Braven adopting this useful design for a speaker that is intended for use outside. But while the Style 360 is a “go-everywhere” speaker it is just as comfortable at home as it is on your next bike ride thanks to its 12 hour playtime, 360 degree sound and, get this, voice control. 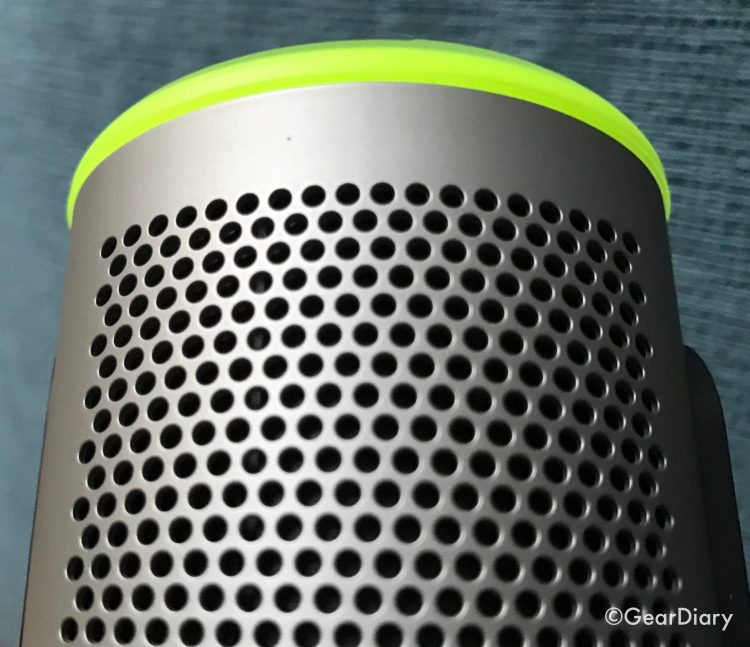 The design of the Stryde 360 is an unusual mix of industrial and “playful.” 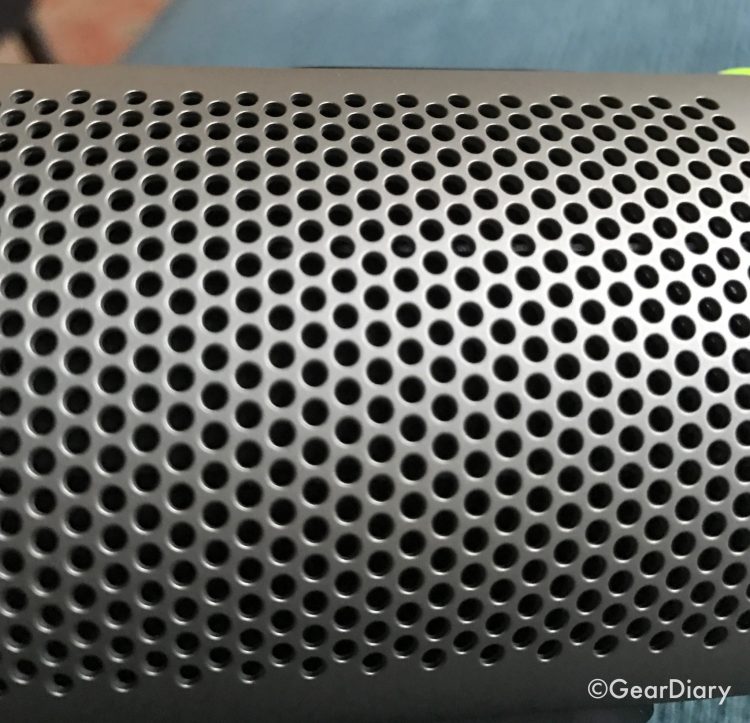 The main portion of the Stryde, that is, the cylinder itself, is aluminum-colored plastic that is perforated on both sides so the music can flow in all directions. The material used is tough and even the hardest attempt to press on it doesn’t offer a bit of give. 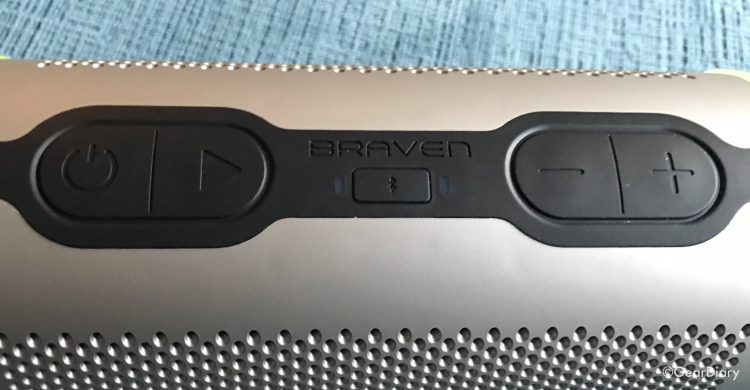 The top of the speaker is a black rubberized material that aids in the speaker’s IP67 waterproof rating. On the left is the power and the play button. 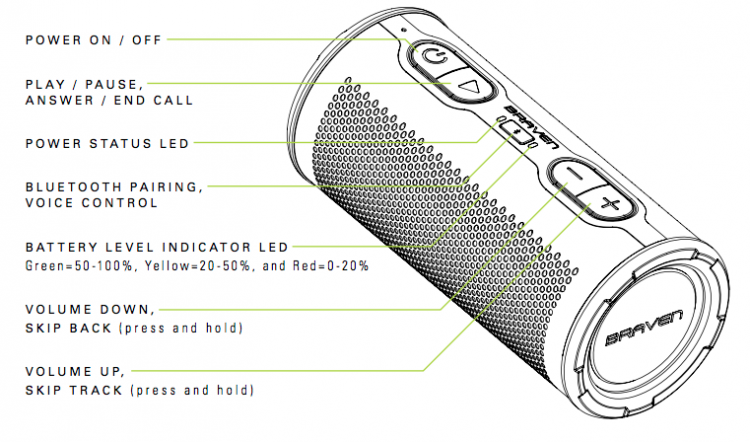 On the right are the volume up and down buttons. Between the two sets of buttons is a fifth button. This one is for Bluetooth pairing and activating Siri or Google voice assistance. 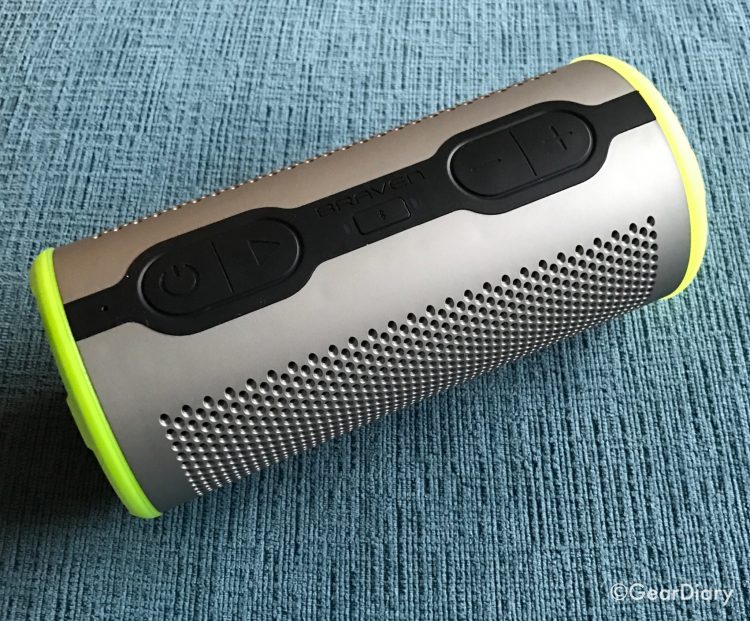 The bottom of the speaker houses the black rubberized feet. 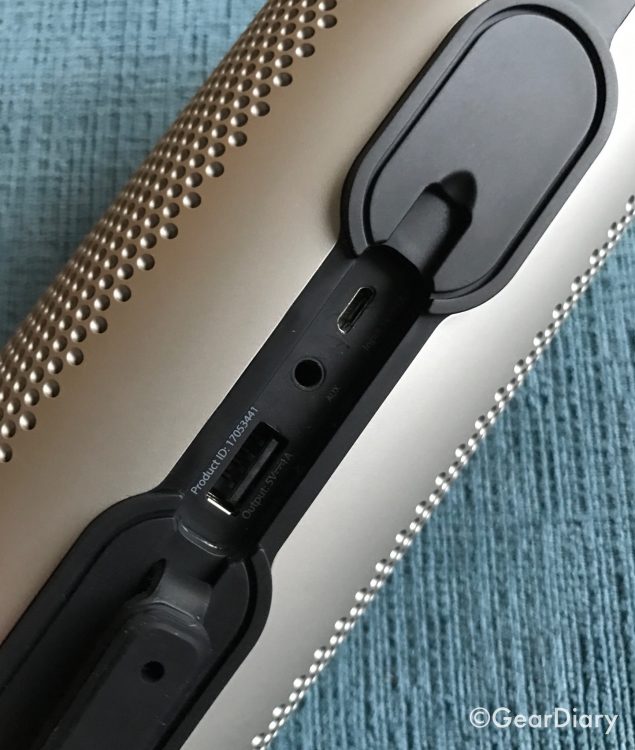 Between the feet is a rubber port that hides, and protects, the micro-USB charging port, a 3.5mm headphone jack and a full-sized USB port for charging devices on the go. 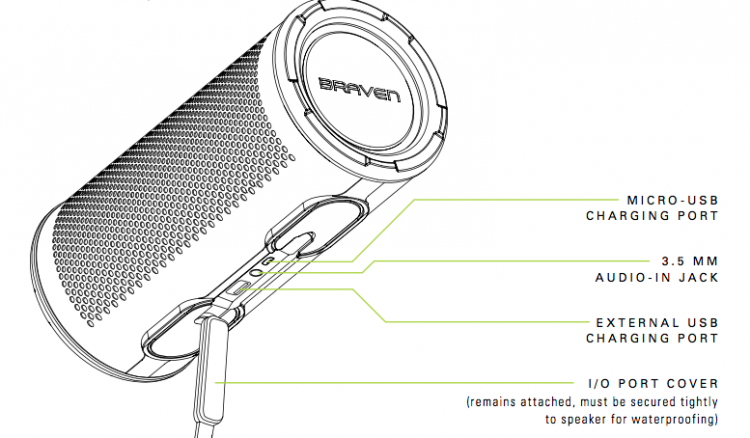 The 2500mAh battery inside means you get a good amount of playback time AND can charge your phone or tablet when it runs down. 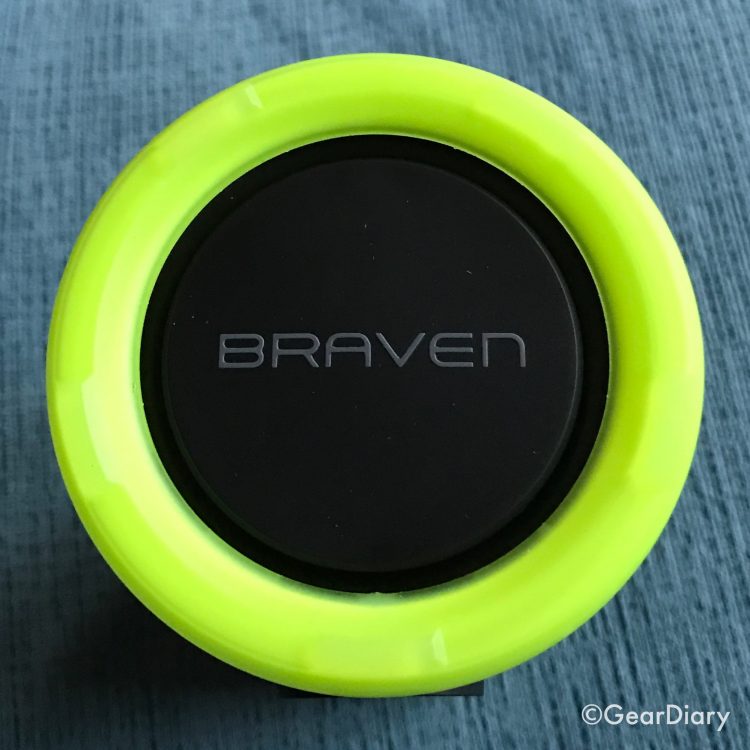 Each of the sides has a black passive radiator that helps this small speaker push out enough bass to keep most everyone but the committed bass-heads happy. The Braves name is embossed on each of the passive radiators. Surrounding the passive radiators is a colored ring that adds a contemporary look to this otherwise simple speaker. The bright aluminum colored speaker has a yellow ring. The darker model has a red ring. Both look great.

Immensely powerful and conveniently portable, the Stryde 360 Bluetooth® speaker fires loud, pure audio on all cylinders. Designed to go where you go, it easily fits in cup holders and water bottle cages, and is a lightweight addition to backpacks, sport bags or purses. Stryde 360 distributes smooth, consistent 360-degree sound from dual passive radiators with custom, in-house tuning for perfect sound every time. Its certified waterproof exterior is ideal for the pool or beach and the built-in voice control works with your smartphone to give a command or make and take calls hands-free.

The Stryde 360 can also function as a speakerphone thanks to the small, hard-to-find microphone hole on the top. The answer or end a call you simply press the Bluetooth button once.

The Bluetooth button has one more trick in addition to letting you pair and accept/end calls. By double pressing the button you can activate Siri or Google voice assistant if the paired device support them.

I’ve mentioned the fact that the Stryde 360 has an IP67 rating. That means the speaker can be fully submerged in up to 3 feet of water for up to 30 minutes. That means it can withstand rain when the skies open up during a bike ride, splashes if you are by the pool or accidental dunks if you are spending the day at the beach. Of course the waterproofing only does its job if the cover is closed and all external cables are removed.

The Stryde 360 gets surprisingly loud considering its small size. The passive radiators on the side certainly do their job and let the small speaker deliver decent bass. I really love being able to place a hand near either side and feel the air being moved by them. It is worth noting that the Stryde 360 truly lives up to its name; the sound is delivered from all sides so you don’t need to worry about where and how you position the speaker. Of course the Stryde 360 can’t compete with large, powered desktop or bookshelf speakers like the Audioengine HD3 that sit on my desk at home. (Read the review.) It isn’t intended to. This speaker is designed to be a small, light, tough speaker that can go with you pretty much anywhere. It delivers on its intended goal in a big way and, at under $100 is a worthy contender in a crowded market. 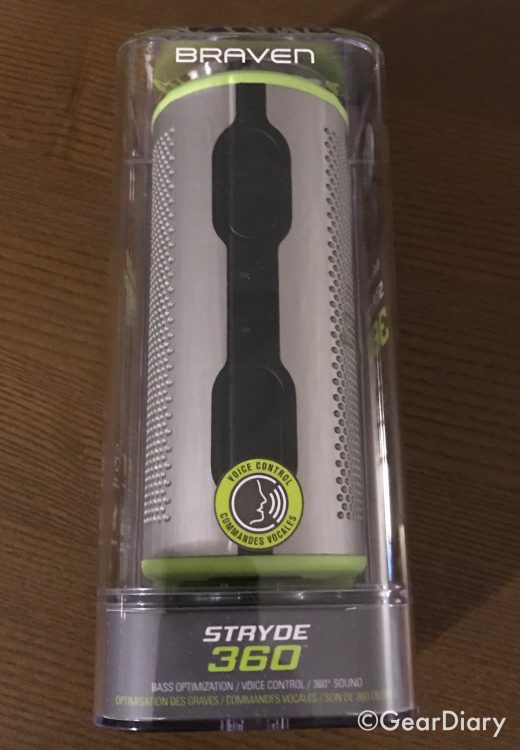 If I had to identify any criticisms they would be few. I do wish the speaker came with either a protective bag or case and/or had handles so you could hang it or tie it down when, for example, using it on a sailboat. Also, I do think the “Voice Control” functionality is a bit misleading since it really just refers to being able to activate your device’s voice control. Those, however, are minor complaints about an otherwise excellent waterproof Bluetooth speaker. Check it out here.

What I Like: Small; Under $100; Bluetooth connects easily; Waterproof; Sound goes in all directions; Decent battery life; Able to charge your phone; Design fits in a cup holder or water bottle cage

What Needs Improvement: No included bag; No way to hang or tie down the speaker; Voice control is really a function of the source device