Way back in 2011 we wrote about the site CanIStream.it, which was a pioneering service that would crawl video streaming sites to see if a certain movie was available to stream, rent or buy. It was a solid service for the time, but has long since stopped being updated or supported. Now a new site called Reelgood has launched, bringing even more video streaming tracking sources, and much more! 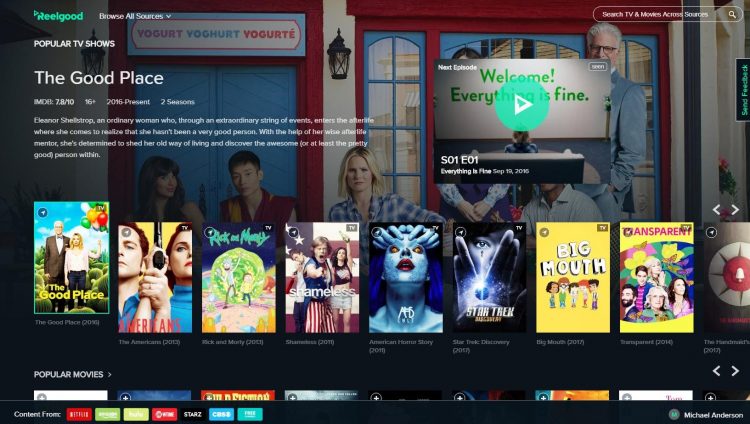 At our house we have an Amazon Fire TV as well as cable, but seldom catch our shows when they actually air. As a result we have to hit Hulu for some, Amazon for others, Netflix for still others, Starz, Showtime, and so on. More than a few times we wanted to watch one show but chose the wrong service and so on. Not the end of the world, but still annoying. Also, for many of these shows, you need to jump into the correct app to figure out how many un-watched episodes you have for a particular show.

The basic premise of Reelgood is to aggregate as many video sources as possible, gather up data about movies and TV shows, and allow you to track your watching status for any number of shows across all of those video sources. And make it easy to do all of that – and also make it easy to discover new shows and movies.

Reelgood’s founder, David Burhenne-Sanderson, explains the problem this way:
“Until now, people have accessed their content in the way that’s been driven by business demands—not consumer needs. People shouldn’t be forced to waste time every night flipping between streaming apps to see if there are new episodes of the shows they watch or what content they have access to. It should all be in one place and there shouldn’t be any barriers between them and the perfect show or movie,” he says.

“You’d never check the websites for American Airlines, United, Alaska, etc. to book a flight—you’d just use Kayak,” Burhenne-Sanderson continues. “It’s time we get the same experience when we come home after a long day and just want to start watching, and that’s exactly what we’re doing at Reelgood.”

How well does it work? Based on initial tests, I found that in every possible way Reelgood was better than any other service I had checked out to do similar things – and it isn’t even close.

For TV shows, I could easily search for our favorites, click to Track, and tell the app how far we have watched – and then the rest of the episodes are added to the ‘Episodes To See’ tab on the Tracking page.

For movies, it correctly identified ‘reboots’ versus original releases (I tried the 1971 ‘Straw Dogs’ which is sadly not available to stream anywhere), and lists where you can stream the movie. For the first few things I looked at, there were no streaming sources available – which I independently confirmed. It also suggested ‘similar movies’, some of which were spot-on, others not so much – but no worse than any other site. Then I chose ‘Legally Blonde’, which we could stream on either Hulu or Vudu. With a single tap I could jump right to Hulu to watch it, which is super-convenient!

I currently have 47 (!) sources linked to my Reelgood account, have started tracking a number of shows and movies, and am thrilled by the app and site performance and cross-platform tracking. Hopefully Reelgood will see success with their business model and continue adding sources and building their recommendation engine to be even more useful at helping find stuff to stream that we are likely to enjoy!

If you have multiple streaming accounts, definitely check out Reelgood!