I finally got the notice that my iPhone X has shipped. Yes, I ordered it minutes after the page went live, but I still got pushed back to the middle of November. When it arrives, I’ll be ready with great accessories like the Incipio GHOST Qi 15W Wireless Charging Pad. At under $60, it’s ready to keep your iPhone charged. 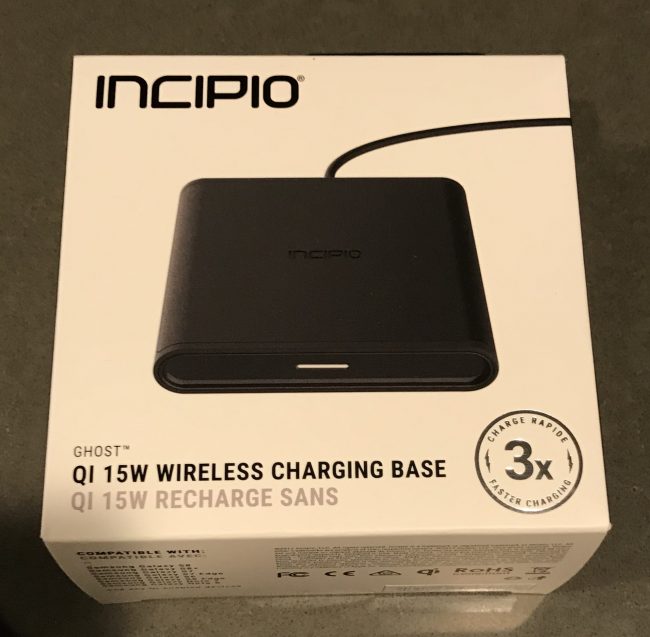 There are a lot of wireless charging pads currently available. There are even computer monitors that have charging pads built-in. The BenQ is one example. But if you want something that is small, will pretty much disappear on your desk or nightstand and delivers a quick charge, the Incipio GHOST Qi 15W Wireless Charging Pad may be the one for you.

Charge untangled with the GHOST Qi 15W Wireless Charging Pad. Engineered for 15 watts of rapid refueling, it charges Qi enabled smartphones and tablets to full capacity three times faster than standard five watt charging pads and alerts you with an LED indicator when your device is on the base. It’s finished with a matte black, rubberized frame that ensures your device stays put while powering up.

Compatible with all QI-Enabled devices, the charging pad is ideal for the new iPhones but will, of course, work with any device that uses the Qi standard for wireless charging. 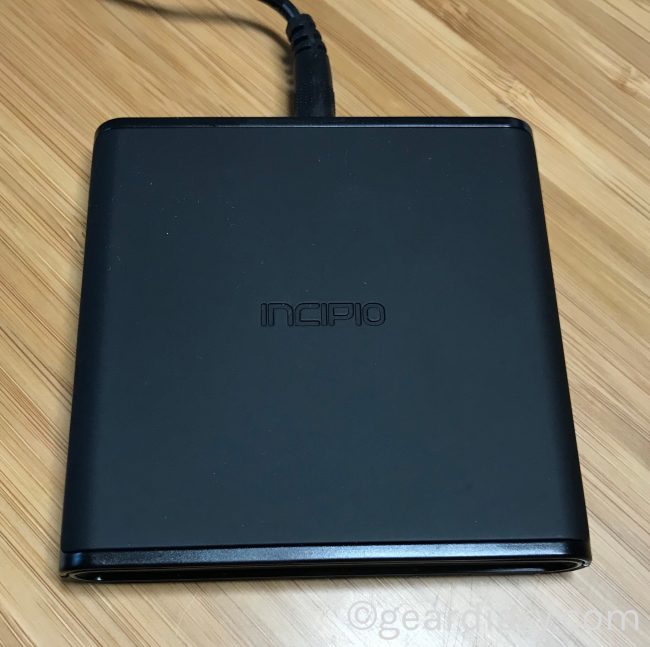 The Incipio GHOST Qi 15W Wireless Charging Pad is a small black square of plastic. It measures 3.5 inches by 3.5 inches and weighs just 2.4 ounces. At the back of the charging pad is a port into which the included AC adapter plugs.

At the front is a small “window” at the front of the charger that is easy to overlook initially.

Setting the GHOST charger up is rather complex. The first step is to plug the charging pad into an outlet. The second step is to place a Qi-enabled device on top of it. The third step is… no, actually there is no third step. In other words, setting up the Incipio GHOST Qi Wireless Charging Pad is simple. It takes about five seconds. 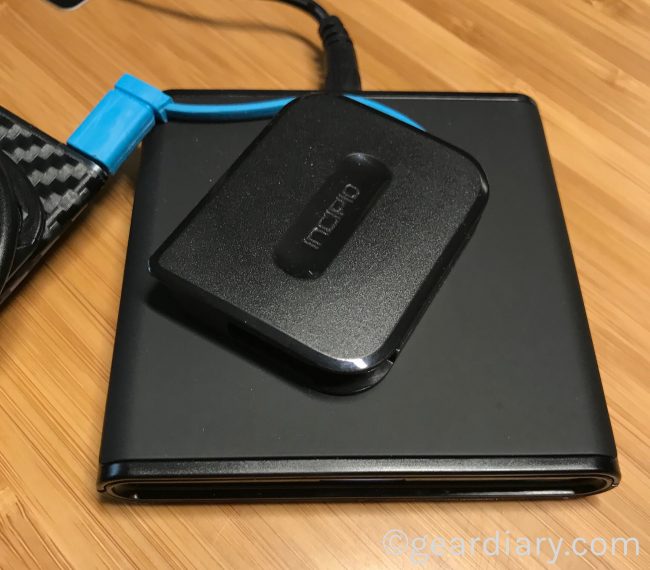 When you place a Qi-compatible mobile device on the pad, or, in my case since my iPhone X has not yet arrived, one of Incipio’s Ghost Wireless Adapters, the window at the front of the charging pad begins to glow.

(Incipio offers two different Ghost Wireless Adapters.  The version with a Lightning connector is $34.99 while the one with a micro-USB connector is just $29.99.)

The key to this charging pad is that it is simple, unassuming and delivers a full 15 watts of power. That means your mobile device will charge at a faster rate than it otherwise would with a charging pad offering a lower wattage. For example, Incipio offers a charging pad that is $20 less but doesn’t provide the same wattage. Personally, I’m of the opinion that if you are in the market for a wireless charging pad, it is worth the extra dollars to get the fastest charging solution possible. In other words, get this charging pad!

At $59.99 the Incipio GHOST Qi 15W Wireless Charging Pad is a bit more than some of the other charging pads on the market. The small size and rapid charging make it worth considering if you have one of the new iPhones or one of the growing number of devices with wireless charging built-in.

What I Like: Small; Simple to use; Offers rapid charging; Has a small light that lets you know when it is delivering power to your device