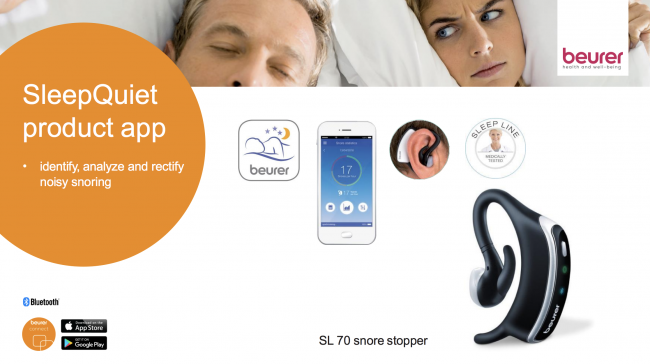 Buerer is a European company that’s been around for almost 100 years; their focus is health and well-being. At the IFA GPC, their Managing Director, Georg Walkenbach, mentioned that they currently have 12 apps and 60 connected devices. Georg mentioned several of their health-focused device and app combos, but the one I really took note of was their SleepQuiet app.

The SleepQuiet app used in conjunction with Buerer’s SL70 Snore Stopper device is supposed to “identify, analyze and rectify noisy snoring.” The SL70 Snore Stopper looks like an over-the-ear hearing aid, and it operates as “gentle snore therapy for light and heavy snorers, extracting “the user’s snoring” with a “voice and bone conduction vibration signal.”

Buerer says that when snoring is detected, the user is notified with a sound and “vibration alarm at the ear (intensity individually selectable).” I’m guessing this is supposed to substitute for the gentle (or not so gentle) shoulder tap coupled with a “baby, you’re snoring … could you please roll on your side,” that those of us who are married to snorers are used to delivering at various times each night.

Since the SL70 Snore Stopper is offering real-time detection of snoring noises while connected to the SleepQuiet app, you (or your snoring bedmate) will get precise snoring analysis including: snoring behavior at a glance, a display and graphical historical representation of your snoring data, a determination of snoring volume, and a snore diary.

Ha! This is just what every snorer needs. No more ear plugs for the person who sleeps with them, and no weird and uncomfortable mouthpieces for the snorer.  The SL70 Snore Stopper will wake them up when they are sawing logs so they can stop, and the app will keep a diary of how it’s working out for both of you.