Posted By: Chris Chamberlain May 10, 2018
ShareTweet 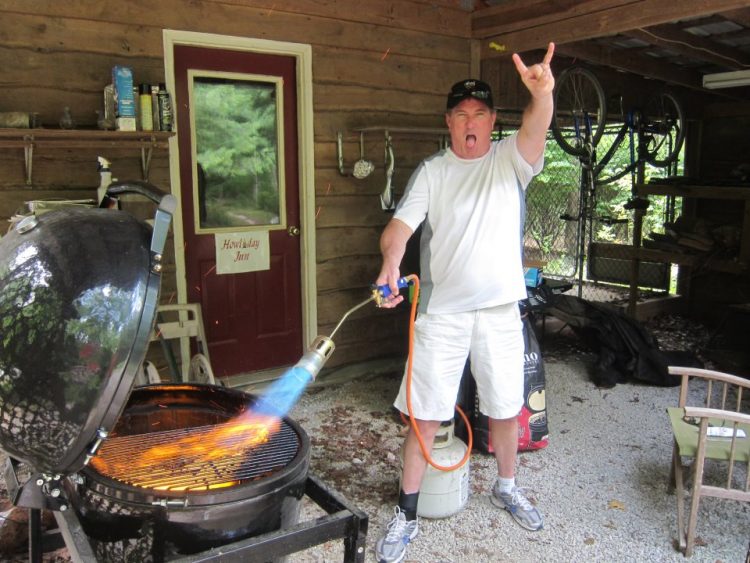 As much fun as this looks, a garden torch probably isn’t the safest and best way to light a barbecue grill. I have used a torch hooked up to a propane tank in the past, but despite my friend’s enthusiasm in this photo, I’ve found a better way: The Bison Airlighter 420. Here’s why The Bison is a significant improvement.

I’ve written here in the past that I have two different primary outdoor cooking devices, a Medium Green Egg at my home and a Primo XL at my vacation cabin. Oddly, I use a different method to light the grills at each location. For one thing, I don’t use lighter fluid. Ever. And neither should you. It is an abomination unto the grill gods and will just soak into the ceramic sides of your kamado grill, so everything you ever cook in the future will taste like a petroleum product. Don’t do it.

So in my mountain home, my grill is pretty far from the house, so I’m not afraid to let ‘er rip and fire up the big torch. Hooked directly up to a propane tank, this torch is pretty much of a flamethrower and can clean old food off the grill grate and then get a decent fire going in a minute or so. Cons to this method, it’s not especially environmentally sound to consume that much propane just to light a small fire, and I’ve been known to frighten small children and squirrels in the trees with the roar of the flaming jet. Plus, that propane tank is kind of heavy to schlep around and a pain to hook up to the torch every time I want to start a fire.

At home with my Egg, I have been using a Looftlighter. Think of a turbocharged hairdryer or a heat gun like you would use to strip paint. The Looftlighter uses an electric heating element to create superheated air which it blows at high-speed onto charcoal to start a fire. After about a minute of direct contact with the charcoal, you draw the Looftlighter back away from the fire while still blowing hot air to help spread the fire. It can get your fire going in a couple of minutes, and you’ll be ready to cook within fifteen minutes.

My only problem with the Looftlighter is having to find a place to plug it in and deal with the electrical cord, and then finding a spot to set the hot metal tool down where none of my pets might accidentally stumble into it. At least it’s probably a lot safer on my wooden deck than a garden torch. 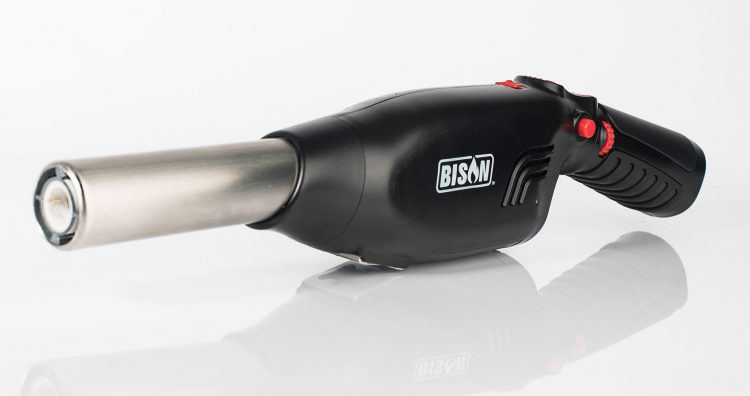 Enter the Bison Airlighter 420 (which the inventor swore to me at the Hearth, Patio & Barbecue Expo was not a veiled stoner joke.) This lighter combines the best of my two previous favorite methods without the downsides, and at a more affordable price. The basic idea of this product is to create a tiny hot flame like a miniature version of the garden torch. Then, instead of blowing superheated air, you can just blow regular air at the ember that you’ve lit with the mini torch. You might remember that Judie reviewed an earlier vision in 2014. [It is still going strong all these years later – Judie] 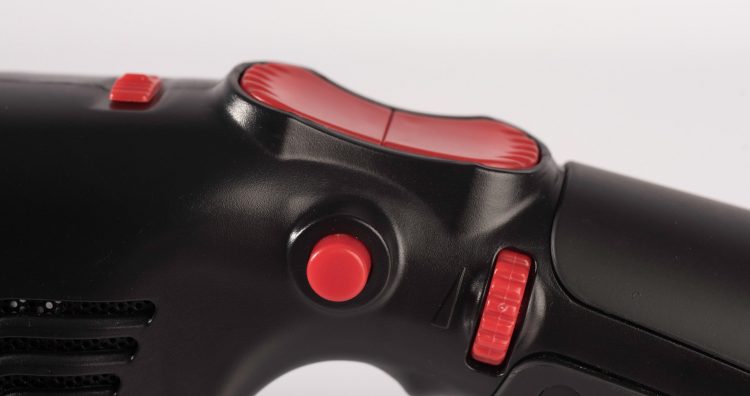 After filling the Bison with butane (just a few seconds of filling will light at least a dozen fires,) insert 3 AA batteries. If you use rechargeable batteries, there’s a mini USB port for charging. Either way, you should easily get through the summer grilling season with one set of batteries.

The controls are appropriately complicated to keep kids from playing with a torch, but not so complex that a reasonably adept adult can’t figure them out. Slide the child safety lock to the right and rock the main control switch to the front to ignite the torch. A wheel controls the level of the flame, and it’s important not to exceed 45 degrees angle when lighting so that the flame doesn’t blow itself out.

After about a minute of flame contact with the charcoal, you should have a decent little ember glowing and a small open flame. Rock the switch to the back to switch from flame to blower and blow the flame for another minute as it expands and spreads around the grill. After a couple of minutes, you can back away and forget it.

The Bison Airlighter never gets as hot as the Looftlighter, is easily portable thanks to the lack of electrical cord and consumes a fraction of the fossil fuels as that noisy garden torch. It may take another minute or two longer to be ready to cook as opposed to the other two methods, but the safety and convenience factors certainly warrant that wait. Who’s in a hurry when you’re grilling anyway, right? 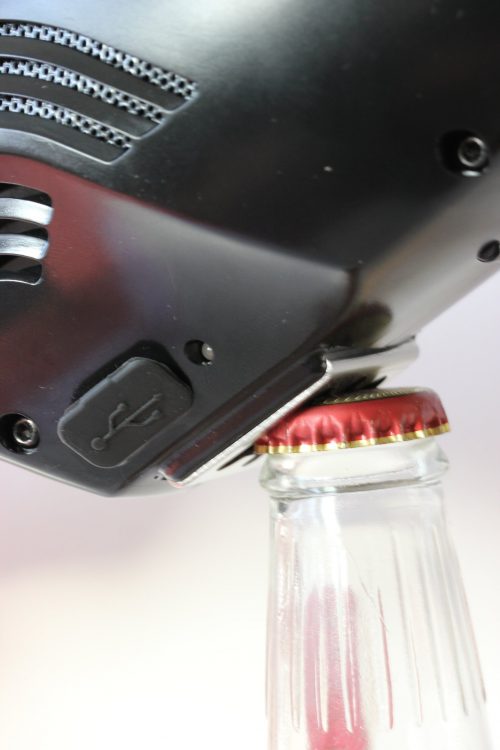 Like just about every other tool I saw at the HPBA Expo, the Bison Airlighter 420 also comes with a built-in bottle opener because apparently no grill professional should ever be more than a step or two away from opening that next bottle of beer! Proving it’s more than just a unitasker tool (two if you count opening bottles,) Bison also suggests using your Airlighter as a kitchen torch for making crème brûlées or searing meats.

While I still like my garden torch and Looftlighter, and every now and again it’s fun to unleash hell when lighting my grills, I think that the Bison Airlighter 420 represents the best of both. I actually have a bag that I keep tools that run back and forth from my cabin, and the Bison now lives there. I think I have a new favorite!

The Bison Airlighter 420 retails for $49.95, and it is available for sale on the company’s website and at other online and outdoor equipment retailers.

What I Like: Ease of use thanks to portability, lightweight design, good balance and no need for a power cord; Contains enough fuel and battery power to light as many as ten fires without worrying about recharging

What Needs Improvement: I wouldn’t mind if the torch was a little more powerful, but you sacrifice heat for economy and ecologically sound practices — I’m just a bit of a pyro at heart, I guess