At the end of March, Beamdog Studios – the group responsible for bringing the Baldur’s Gate, Icewind Dale and other 90s classic games to the modern age – released an ‘enhanced edition’ of the venerable 2002 RPG ‘Neverwinter Nights’.

The new version features enhanced graphics and widescreen-friendly resolutions, and has already seen a number of further updates with many more promised. Now we get the first add-on release, which just happens to be my favorite ‘Premium Module’ from the original game, ‘Darkness Over Daggerford’ by Ossian Studios. 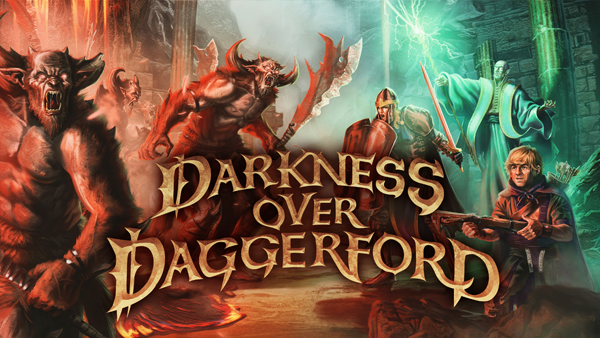 I reviewed the original ‘Darkness Over Daggerford’ as part of an article looking at all of the ‘Premium Modules’, saying:

This was planned as a Premium module, but was cancelled when Atari pulled the plug on that program. Ossian studios continued on and released the module in August for free. And thank goodness they did – the game offers tremendous gameplay as well as innovations that make it hard to believe this is just a module.

From the start it is clear that things are different in this module – there is an overworld map and unfolding story reminiscent of Baldur’s Gate 2. The ability to gain a stronghold is another thing that makes this feel like that classic game. There is a love for the D&D world and gaming universe heaped on this module that adds to the fun without feeling forced – for example, in one quest, you find a floating skull who was from a different plane … a place of Torment. Add to this a solid story and quest that unfolds gradually as you open areas on the map and you have a feel for the excellence of the module. Many newer modules are stricter about enforcing your alignment, and this is no exception. You get small rewards or deductions to your alignment as always, but also small bits of experience as a bonus.

There is a single criticism I have – the game was released needing some more testing and polishing. There are broken quests and other bugs that occur to almost everyone who plays the module. There was a patch that addressed most of those, and since I finished the module a second patch has come out. I had one quest that seemed broken, but it was a minor one that didn’t impact my ability to play through.

It is perhaps ironic that my favorite of the Premium Modules is the one that was cancelled and released for free. That aside, this is just a tremendous game – and I can’t think of it as anything but a ‘game’. It has as much content as either of the NWN expansion packs, and is larger and more interesting than many full-priced role-playing games being released. This succeeds by leveraging the strengths that already exist in the game and focusing on what matters most – providing a compelling story that unfolds in an interesting way, and a wonderful player experience.

I had noted issues that were resolved soon after the 2006 release, but the enhanced edition has hundreds of fixes and improvements in addition to the graphical update. Check out the full release notes here http://www.ossianstudios.com/downloads/DoD_Enhanced_v2.0_Change_Log.txt

Upon the release of the Enhanced Edition module, Ossian president Allan Miranda had this to say:

Back in August of 2006, when we released Darkness over Daggerford for free to the Neverwinter community, it was with a certain level of bittersweet satisfaction. We had managed to create a great 25+ hour premium module for BioWare with a classic-style D&D story that took inspiration from the Baldur’s Gate games, including world map exploration, beautiful areas, colourful characters, and an abundance of very original and intriguing sidequests. We took great pride in what we’d created, but when the premium mod program unexpectedly cancelled, Daggerford was never able to achieve the official game status it was intended to have.

Fortunately, over a decade later, Beamdog offered us the opportunity to release an enhanced version of Darkness over Daggerford as an official Neverwinter premium module. This remastered game has all we had aspired to have for an official Neverwinter Nights product, including new art and audio, and most importantly it incorporates a huge amount of improvements and fixes based on fan feedback and critiques of the original. We really are thrilled to release this definitive version of Darkness over Daggerford and hope fans enjoy playing it!”

You need the Neverwinter Nights Enhanced Edition base game in order to install Darkness Over Daggerford. Head over to Steam where both are available, with Daggerford getting a 15% launch discount off the $9.99 price!