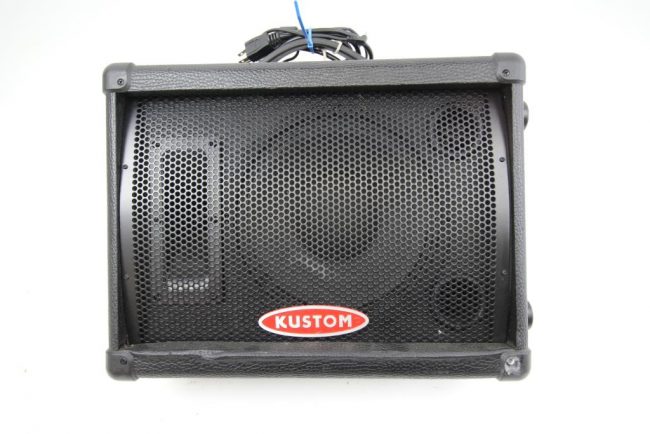 Last weekend, my wife and I hosted an indie rock show in our living room.

It wasn’t the first house show we’ve ever thrown, and it certainly wasn’t the loudest. But as I was sound checking the bands, I realized that I desperately needed to upgrade my live sound set up.

For most of our house shows, I’ve either borrowed a sound system from a friend who runs a venue down the street or, if the show is quiet enough, run the vocal mics through a small guitar amp.

On the occasions that a loud band is coming through on a night that my friends’ system is unavailable, I have to move my band’s practice system up from the basement. That system is made up of two old JBL floor monitors and an ancient six channel mixer/amplifier that weighs sixty pounds, made by a company I’ve never heard of.

As I lugged the prehistoric unit up my stairs and wrangled it into place behind the drum cage, I said to myself, “there’s got to be a better solution.” I had another small six-channel mixer that weighed two pounds. If I could find some powered speakers, I would be able to use that mixer and the speakers by themselves to make a much more streamlined. They had to be cheap though—I’m still paying off those student loans, y’know.

I scoured the internet for good deals on powered speakers, but most of the speakers were either out of my price range or were too small to project over a full band.

The Kustom KPM10 is a 50-watt 2-way speaker. It’s powered by a modest 10″ subwoofer and a Piezo driver. It features both XLR and 1/4″ inputs, a volume knob, and a thru jack so you can chain multiple monitors together. They can be used as an amplifier for a single instrument or microphone, or with a mixer to stand in as a small PA.

Someone in my town was selling a brand new pair for cheap. I did some research online and found that they retail for $99.99 on Amazon. That price didn’t inspire a lot of confidence in their performance, but I figured it would be a good place to start.

I contacted the seller on Facebook and drove to his house. When I arrived, he was playing “Paradise City”—loud. They certainly seemed to have the power I needed. And, they were easy to transport—a light 30 pounds apiece. I paid him my money and took them home for a more accurate test.

My bandmates weren’t readily available, but I could get pretty loud myself. I plugged in a microphone and a keyboard into the KPM10s and turned my guitar amp to the max. Even at 50% on the KPM10’s volume knob, I could still hear my voice clearly over the roar of my electric guitar. And even at such high volumes, there wasn’t any feedback. The sound was crisp and clear.

I decided to test it to its limit. I plugged in a synthesizer and cranked the volume to the max. Above 75%, the signal started overdriving. However, I would never approach those volumes in the context of a house show, so I’m not too worried about it.

At the end of the day, my aim wasn’t to build a sound system for a large venue. It was simply to streamline my PA for house shows and band practice. And for that purpose, the KPM10 is a perfect solution.

The Kustom KPM10 retails for $99.99 and it is available on Amazon [affiliate link].

What Needs Improvement: For the price, nothing