As I said in my last Kindle Unlimited book review, I am a sucker for anything with time travel. And after suffering through The Gray Ship, I figured a story about paleontology students finding a time machine might be fun. It wasn’t as bad as woke Abraham Lincoln, but The Navigators gets itself pretty lost. 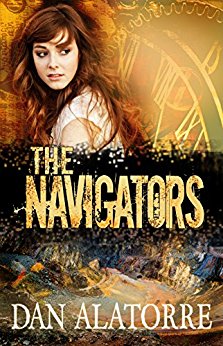 Again, spoilers abound, so if you’re at all interested in reading The Navigators by Dan Alatorre, stop now.

The basic premise and setup of  the book isn’t terrible. Five paleontology students from the University of Southern Florida are digging in an abandoned mine when they come across a strange device that is definitely not related to mining or dinosaur bones. One of them consults a computer science student, who then consults with some other friends, and they all determine it’s a time machine. That’s when things get weird. The paleontology students decide they don’t trust the computer science student, so they beat him up (???) and then proceed to fret about how to hide the machine, because it technically belongs to USF since it was found during a university-sponsored dig. They figure out how the machine works, one guy goes back to ancient Rome and gets beaten up by Roman Legionnaires for looking like a 21st century college student. Meanwhile, the computer science guy somehow convinces the dean of the paleontology department that his students are hiding a very lucrative time machine, and this kicks off a series of ridiculous events:

That’s the basic summary, and I’m leaving out the other weird things like the breaking news alerts, a sketchy motel that only takes cash, shoplifting a Radio Shack … it was weird. It’s a shame because there was a good idea in there, but it just kept getting lost in the escalating conspiracy theory being run by people with zero proof beyond the whiny computer science guy. Also, and this was totally my issue, but I kept picturing the comp sci student as Zach Varmitech from Wild Kratts [It’s not as weird as it sounds, I do have a 5-year old!], and that just made the whole book even weirder.

There were some formatting and editing issues (it was driving me nuts that it kept randomly skipping from first person narration for one character to 3rd person omniscient narrator with no warning), but three very strange things bothered me most about the book. Two are petty, one goes to the heart of the whole time travel thing. For the petty stuff, one of the main characters was Indian, but the computer science kid keeps referring to this character having a “middle eastern” accent. I’m not sure if that was to highlight how terrible the villain was, or if the author has grievously misunderstood world geography, but India is most definitely not part of the Middle East. Also bizarre was that both the computer science kid and the Indian student trying to avenge his grandfather planned to buy one share of Coca Cola in 1919; they thought of using gold since modern dollars wouldn’t work, and the math is technically correct, in that if you bought one share of KO in 1919 and reinvested dividends you’d be a multi-millionaire today. The part that makes no sense is how they planned to pay the taxes on the yearly dividends and avoid escheatment to the state in the intervening 90+ years. Plus I’m still really mad a book about a time machine had so little actual time travel.

Now, there was some time travel. In addition to the kid who got beaten by legionnaires and the one who almost got eaten by the sabre-tooth tiger, the sort-of first person narrator and the mayor’s daughter travel back in time to try to save her mother from a drunk driver. Instead, the daughter’s presence in the road is what causes the driver to swerve and hit the mother. The friends then travel to a happier memory of mother/daughter, then they toss the machine into a swamp. The book plays this off as “the mother was always meant to die”, but seriously, without knowing if the same would have happened without the time machine, that’s kind of dark. Basically, the book is using a theory of time travel that says “because this group of friends found a time machine, this woman’s mother had to die”. It would have been interesting to see the book try to work through alternate timelines-could they alter the mother’s fate by stopping themselves from getting the time machine? Maybe go back further and try to stop her from going out entirely? If they do that and the current timeline still has the mom dead by drunk driver, then you can shrug and say “ok, she had to die”, but as it stands now, the book is basically blaming the daughter for her mom’s death. It’s weirdly dark, and the rest of the time travel stuff is tossed off as so lighthearted it feels like it was tacked on from a different story.

But really, what bothered me most was that an entire law enforcement manhunt and conspiracy was spurred by one person holding a press conference and claiming he knew people who had stolen a time machine. And people believed him. In real life, Florida police only care if you’re giving an impromptu sex ed lecture on a playground, or attempting to pay for your Wendy’s with a live alligator. Florida is weirder than any Kindle Unlimited book.