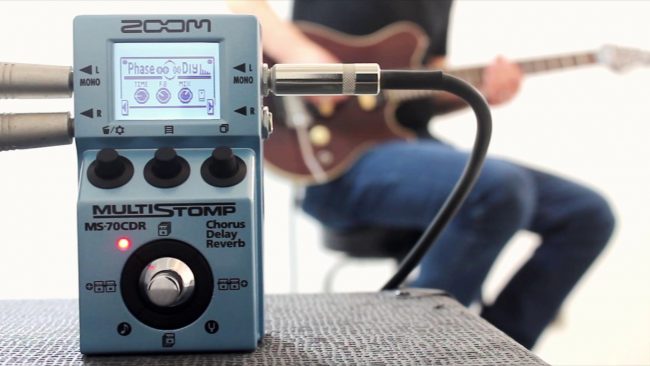 As far as guitar players go, I’m a bit of a gearhead.

My live rig is loaded with stompboxes wired in a labyrinthine tangle of cables and effects loops. When my band plays live, it’s not unusual for a gaggle of audience members to crowd around my pedalboard after our set and ask about my setup.

As you might expect, I’ve developed a fair amount of snobbery regarding certain brands and effects.

So when I played the Zoom MS-70CDR, even I was surprised when it ended up on my board.

Most self-respecting gearheads wouldn’t be found dead playing through a multi-effects unit, not to mention a unit by Zoom. When I started playing guitar, Zoom made a two-switch effects unit that everyone seemed to have. It had a bank of preloaded effects that (to my knowledge) couldn’t be edited. The switches’ only function was to scroll up or down between presets.

Could they have made something that actually sounds good?

Surprisingly, yes. But it’s not without its faults.

But before I dig too deep into the guts of this unit, it’s worth noting that even though this unit contains a wealth of effects, I was only interested in one of them. Years ago, I had an Eventide Pitchfactor, which is a massive unit containing dozens of pitch effects. But I only used one setting, called Crystals. It was a reverse delay with an octave pitch shift. It was a great setting, but the pedal itself had some power issues and buzzed when it wasn’t in use. Plus, it was an enormous pedal, so I couldn’t justify keeping it for that one setting.

I sold the Eventide and tried a few different pedals for the same effect. After a while, I settled on the Boss PS-3, which is highly sought after for its famous Mode 7, which is similar to the Pitchfactor’s Crystals setting. But I was never quite happy with the PS-3.

I asked around for a different alternative, and someone suggested the Zoom. The price tag was just over a hundred dollars, and I figured that if I didn’t like it, I could flip it for something else. After I got it in the mail, I plugged it in next to the PS-3 to see how it stacked up.

After firing it up—and teaching myself how to navigate through the LCD screen menu—I found the ICE Delay, which is the CDR’s emulator of the Strymon Timeline’s Ice setting—an expensive alternative to the Pitchfactor. Where the Boss only had three knobs to tweak Mode 7, the ICE Delay had three pages of parameters, with three settings per page. Navigating that menu wasn’t too intuitive, but I figured it out quickly without consulting the manual.

After dialing in a setting I liked, I saved it as a preset and dug into some of the other settings contained within this compact stompbox.

And there was a lot to dig through. The Zoom MS-70CDR contains 86 individual effects, included as virtual effects, which are easily seen on the large LCD display. You can combine up to six effects at a time, in any order you choose. Many of the effects are specifically designed for bass guitar, which is nice. The last four effects are utility settings like a line selector, EQ, and noise reduction. They aren’t glamorous, but they can be very useful.

The CDR in the name stands for Chorus, Reverb, and Delay, so you won’t find any distortion or overdrive here. However, you will find a wealth of modulation effects such as vibrato, phasers, and pitch shifters, as well as delays and reverbs. Scrolling through the virtual effects, most of them sound surprisingly pretty good.

The pedal is true stereo and has an onboard tap tempo to effect the delay length in real-time, which is an absolute must-have for any delay. It also has a built-in tuner. There is a mini-USB jack in the back of the unit that you can use to download software updates, or to power the unit. There are memory slots for fifty presets, which is far more than necessary.

Not Without Its Flaws

For all of its versatility and diversity, this is still a hundred-dollar effect pedal. And to a certain extent, you get what you pay for.

While most of the effects sound quite good, a few of them are hot garbage. Many of them are coated with a thick sheen of cheap digitalness. They sound rather obviously like a modeler rather than a real pedal. The worst offender, however, is the “ShimmerRv,” which is supposed to be an emulation of the Strymon Blue Sky’s “shimmer” mode. It’s supposed to be a reverb with a regenerating octave signal that adds an otherworldly atmosphere to the reverb. However, the Zoom’s algorithm is somewhat out of tune, and regenerates a few cents short of a full octave. As the pitch shift regenerates, it gets further and further from the original pitch. The result is an atonal pitch shift that sounds downright ugly.

Also, if you’re counting on using your stored presets live, get ready for a headache. Switching between presets is a tedious task that requires you to navigate through the menu by hand. Turning off individual pedals in a chain also requires you to scroll across the pedal selection screen and turn each of them off individually (unless you add a line selector to your signal chain).

The pedal does allow you to scroll between presets using the footswitch, but then you lose the on/off functionality of the switch.

Simply put, there’s no convenient way to get the most out of this pedal in a live setting. If you’re primarily using this pedal for your own practice or in the studio, it should be fine, but using it live is a headache and a half unless you want to use it for a single effect, like me. And for the price, using it for a single effect is still a bargain. Many of the effects that are emulated are far more costly than the Zoom MS-70CDR. You might actually save money buying a few MS-70CDRs and using them in tandem. As for me, I’m more than happy with the ICE Delay.

What I Like: A huge variety of great-sounding effects. Loads of versatility. LCD menu is nice. Powerful for the price.

What Needs Improvement: some of the effects sound like garbage. Not suited for live performance.