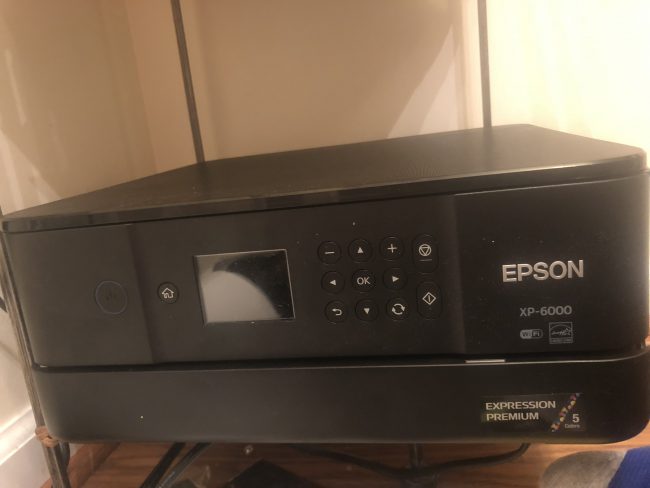 Let’s face it, as paperless as we’re going, you still need a printer regularly. School forms, medical forms, random reports, all kinds of things still sometimes need to be printed physically. So you need a printer, and you might as well have one that’s compact and can handle everything from basic printing to photos. Enter the Epson XP-6000.

The ultra powerful, ultra slim Expression Premium XP-6000 wireless Small-in-One printer delivers superior photo quality and fast print speeds. Print 4″ x 6″ photos in as fast as 15 seconds1. With affordable, individual 5-color ClariaPremium Inks, you can print stunning borderless photos up to 8″ x 10″, plus sharp text. Save time with fast speeds — up to 15.8 ISO ppm (black) and 11.3 ISO ppm (color) — and auto 2-sided printing. Built-in USB and memory card slots, a 2.4″ color LCD and dedicated photo/DVD trays offer additional convenience. Plus, you can easily print from your iPad, iPhone, Android tablet or smartphone — with or without a router.

We’re going to start with the good in the Epson, because unfortunately there’s also some bad. But on to the good — it’s a very compact setup. I love that because I don’t have a ton of great places to store a printer, but it’s small enough that it sits perfectly on a small shelf in my kitchen. The trays all fold up, making the entire setup quite tiny until you need to print. The outside also feels quite sturdy, and the lid for the copier/scanner function feels well designed. 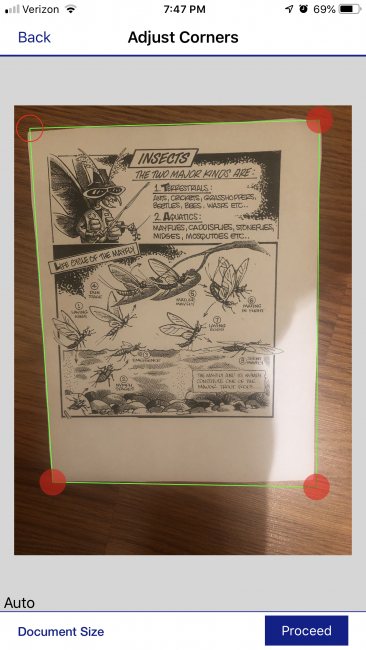 Epson’s companion app is easy to use, with a nice clean user interface that’s icon-driven and very intuitive. I was able to print a photo from the app with just a few clicks, which is nice to know for the next time I’m scrambling to print a picture of my son for my grandmother on Mother’s Day. Not that I’ve ever had to rush to a Walgreens in a panic or anything, but since I’d venture a guess that many people do more computing on their phones/tablets than on computers, having a robust, usable app is a definite win for the Epson. As an added bonus, you can scan and save images using the Epson app, even if you don’t plan on printing it, and it works quite well. 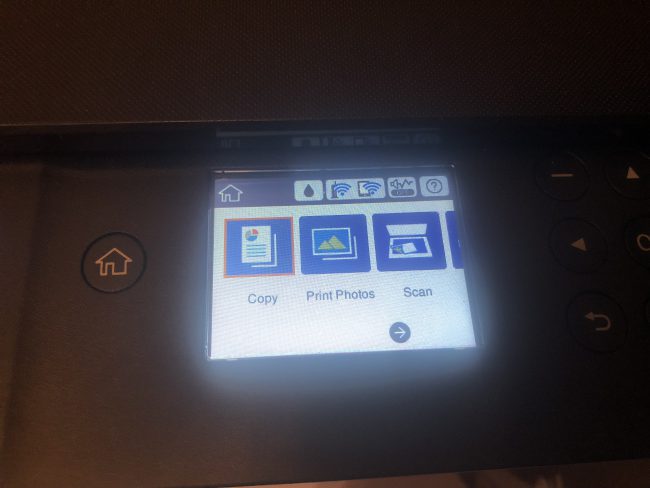 I also tested printing directly from a flash drive, and that worked quite well too, which was a very pleasant surprise. It requires navigating directly on the tiny printer screen, but if you have a photo or file on a flash drive and need to print it without a computer as a go-between, it’s very doable.  When it works, it’s quite good. 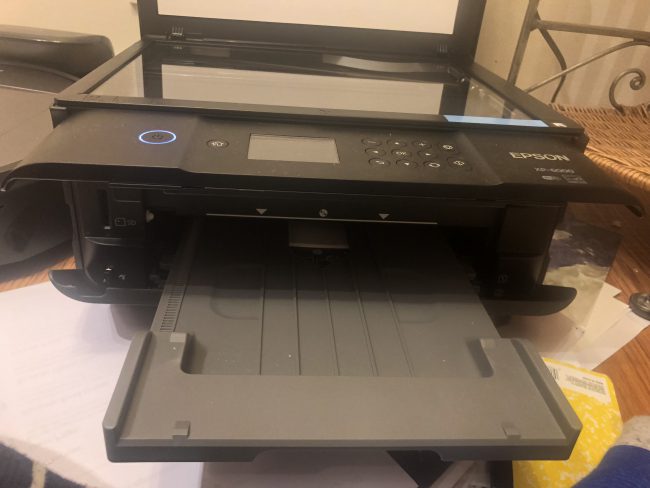 When it works is the key here. Some of my issues are no doubt user-error. I’ll fully admit there were times I was rushing through setup or printing and didn’t do a great job following instructions. But I will say that the setup was a little less intuitive than I was used to, and it still doesn’t explain all my issues. Rushing explained why I had trouble getting the cartridges seated properly, but it doesn’t explain the cartridge leaking all over my hands. Likewise, user-error explained the difficulty I had with getting paper loaded (the paper loading tray doesn’t come out terribly far), and the specialty tray for smaller paper feels very flimsy, so I had some trouble because I was afraid of breaking something. 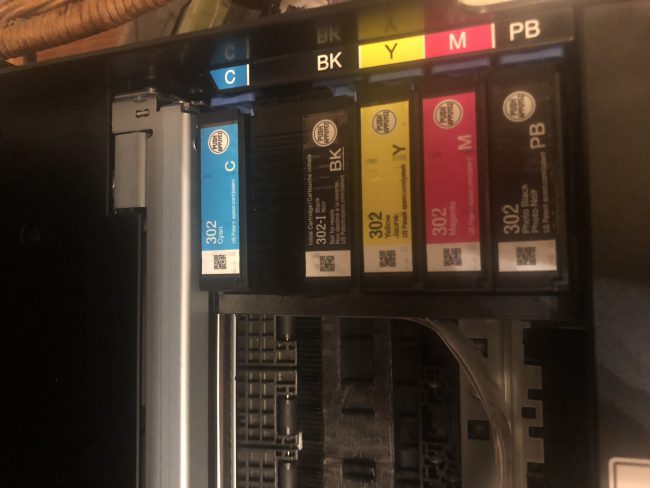 However, none of this explains why the printer would not print directly from the photos app, nor would it print from a non-Epson scanner app. Anytime I tried using those, it gave me an error that there was no paper in the printer. If I switched to an email, or the notes app, or anything else, it printed with no problem (and I didn’t touch the paper in between). That was frustrating, to say the least. I was able to print photos via the Epson app, but I often snap photos of papers that need to be printed later. I don’t need special sizing or formatting to print a sheet I scanned that resides in my photos app, and having to go through the Epson service to print it is an unnecessary extra step. As I said above, it’s not difficult to print a photo from the app, but it’s a huge pain to HAVE to when I’m not looking to use special photo paper. 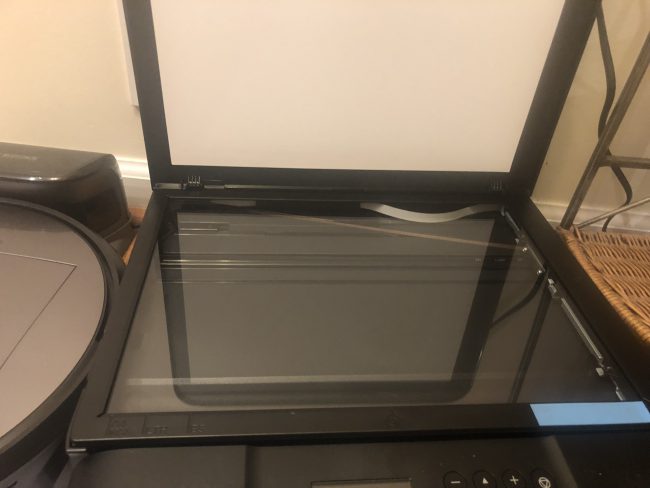 I don’t mean to sound so hard on the XP-6000. It came through for me in a pinch when I needed to print a slew of school forms at the 11th hour, and for straightforward printing from a word doc or PDF, it worked great. It also prints photos just fine if you go through the software, but it’s still a mystery why it claims there’s no paper when printing photos from other sources. I don’t love how flimsy the trays are, and I think much of the non-intuitive nature of the paper loading and cartridge slots are due to the compact size, but it does do a very good job at printing when it works. If you need a compact footprint for your printer, and you’re looking for a jack of all trades for light use, the XP-6000 is a fine choice. Just watch out for the cartridges leaking!

The Epson XP-6000 is currently on sale for $79.99, and it is available directly from Epson as well as from other retailers including Amazon [affiliate link].

What I Like: Compact size; Companion app is well done; Prints photos nicely

What Needs Improvement: Compact size makes paper trays and everything else tighter; The printer is a bit finicky about recognizing if it has paper or not; Trays are a little bit flimsy