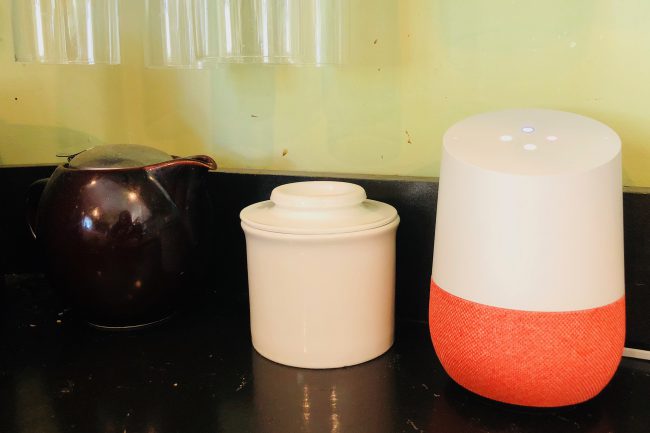 A few weeks ago, a Google rep called my wife’s business to talk about how Google Suite could help her with her business. As part of the experiment, they wanted to ship her a free Google Home.

After a few minutes of conversation, they realized that Google Suite might not be as useful to her business than they had hoped. But, they still wanted to give her the Google Home for her time. They even included a customized speaker base that matched her laptop case, which was generous.

When the speaker arrived, she plugged it in and set it on our kitchen counter. After playing around with Google Assistant for a few minutes, she decided that it would do more good at home than in her office. It is called Google Home, after all. And while she was able to get some use out of Google Assistant, it didn’t necessarily do anything that she couldn’t get Siri to do on her iPhone. It was trying to fill a gap that was already filled. My wife decided it would be much more useful as an extra home speaker than as a digital assistant.

As someone who tends towards vintage audio equipment, I’m freaking out a little bit. Most of my listening is done through a 1970s stereo receiver and a turntable. I’ve been opposed to smart speakers almost entirely on principle alone. Speakers should be big enough to accommodate a subwoofer, and you should have at least two of them so you can get stereophonic sound. But this was free, and I won’t say no to free.

Pairing it to our Pandora and Spotify accounts was easy enough, and since my wife will often just play music through her iPhone’s speakers (the one thing she does that I can’t stand), I welcome the boost in audio quality. And since I’m largely incapable of surviving without music playing, my go-to solution has been to blast a record from the living room on the other side of the house, which doesn’t make for great audio quality either. Not to mention that flipping a record in the middle of cooking or washing dishes isn’t exactly the best idea for vinyl care.

But I was honestly surprised by the sound quality. Despite being not much more than 4″ in diameter, it has an impressive low-end. Its overall frequency range is rather impressive, from punchy bass to bright treble. However, I do wish there was some way to adjust the EQ of the unit (is there? I haven’t dug through the manual that deeply).

As for the actual “smart” elements of the unit, I’m impressed. Most voice-activated tech that I’ve used has a hard time understanding what I’m saying sometimes, and it’s just easier for me to open up the Music app on my phone than to argue with Siri until she gets what I’m trying to say.

But so far, the only problems we haven’t had any issues with Google Home’s voice recognition features. It took us some time to get it to play a specific Pandora station, but that was more a result of the way it chooses to play music via Pandora or Spotify rather than a problem with voice recognition. I found some games tucked away in the game menu, especially one that operated a bit like an old-school text-based RPG, and even though it was extremely limited in its responses, it was a fun experience. We’ve also used it to find and read recipes, which made for some delicious mozzarella sticks.

Overall, the Google Home is a fine addition to our kitchen devices, even though I’m not sure I would have ponied up the money to buy it myself. But as long as we have it, we’ll make the most of it.