I haven’t watched American Horror Story: Apocalypse, but I’m assuming it’s relatively unrealistic. If they wanted to make it more realistic, the only thing left standing would clearly be Casio G-Shock watches. And probably Starbucks. But definitely G-Shocks. Casio has updated the already indestructible G-Shock line with the new GBA-800, which adds fitness tracking to general badassery. 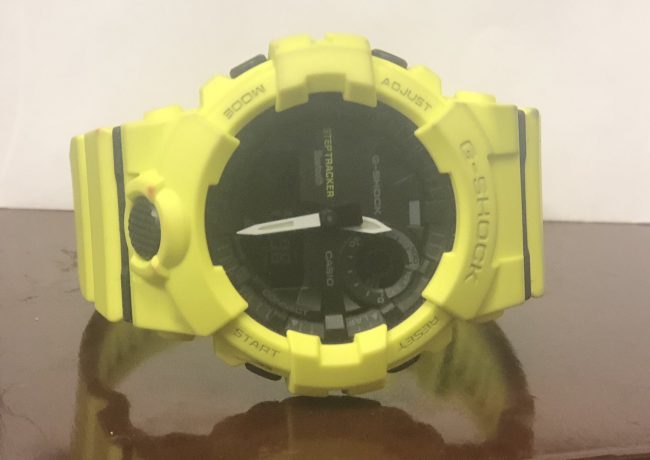 Before we cover the features, we have to cover the color that we’re reviewing. It’s a bright, bright yellow. As in, I wore it to visit my parents and my mother commented it would have been great to have when I was a kid, since no one could miss me with a watch this bright. It does come in other colors, but I’ll admit the eye-searing yellow grew on me over time. It’s almost so bright it becomes a fashion statement in and of itself, and while it looks great with jeans as well as workout clothes, it did clash with my business suits. This didn’t stop me from wearing it, because I’m currently also wearing Batman socks, but for anyone who takes their accessory image more seriously you might want to consider black or navy, two other colors the watch offers as well. 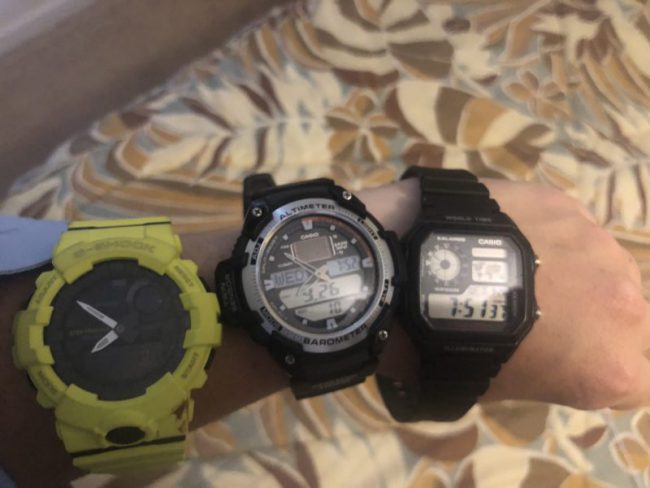 First of all, this is a G-Shock watch, so my joke about it surviving the apocalypse isn’t far off base. It’s shock resistant, with mineral glass and a tough resin case, and it is waterproof to 200 meters. Nothing in your everyday life could kill this watch. The battery is rated for 2 years, though that hinges on how often you sync and use the backlight. The face and case design are unmistakably Casio; there’s four buttons around the face, the backlight button at the bottom, and raised points to protect the glass. Inside, the face itself has both hour/minute hands as well as a digital display, which can be altered from the time to show the timer, stopwatch, date, or your steps (which is how I have it set most of the time). If you have it set to the time, the little circle in the upper right acts as a second hand, but if you have it set to steps, it fills in slowly as your steps go up, so you get a visual as you fill the dial. If you note from the picture of two of my personal watches, you can see design elements from both of those reflected in the G-Shock; my altimeter watch has the dual digital/analog face, and my world watch (aka Casio “Royale”) uses the same concept of a dial in one corner. Casio has a design language that flows through all their watches in different ways, and the G-Shock takes these classic Casio elements but still makes it uniquely G-Shock. The band is not removable but I did find it to be remarkably comfortable on my small wrists, and I don’t think anyone of any wrist size would have any issues finding a good fit. 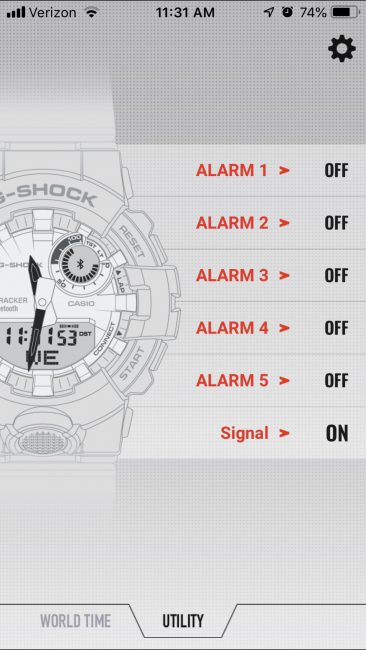 The best way to look at this G-Shock is to break it into two different uses: fitness tracker, and phone-programmable digital watch. Instead of laboriously clicking through watch menus to set timers, stopwatches, dates and alarms, you connect to the phone and do all that via the app, then sync it back to the watch. It’s hands down the best way to program a digital watch, unless you really enjoy squinting at tiny numbers and carefully pressing buttons. The app allows you to program in intervals as well, which is very handy. I used it to create a rowing machine interval workout, but you could easily use it for high intensity interval work. I could see this being very helpful when out running as well-set your workout up ahead of time, sync it to the watch, and then run faster or slower when the watch tells you. Yes, you can easily do that with any good digital watch, but being able to do it on the app just makes it that much cleaner and easier. It also allows you to set alarms via the app, so if you’re the type that needs 6 alarms for one wakeup you can easily do that as well. 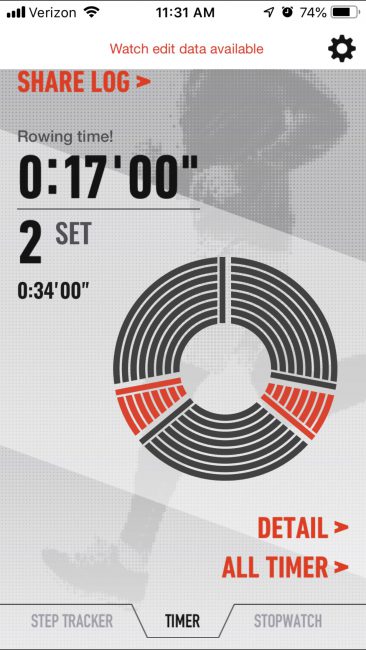 It’s important to note that the watch doesn’t stay continuously connected to the app for things like stopwatches and alarms; you do need to manually connect by holding down a button on the watch while the app is open. That’s fairly minor, but it does mean that you can’t go in and kill the alarm remotely (which is only an issue if you set the alarm while wearing the watch for testing, only to stick it in a drawer when you switched watches and then find yourself awake at 430am wondering why your dresser is beeping angrily. Not that I know this from any personal experience, of course.) In any case, as a supercharged digital watch, the GBA-800 is pretty great. 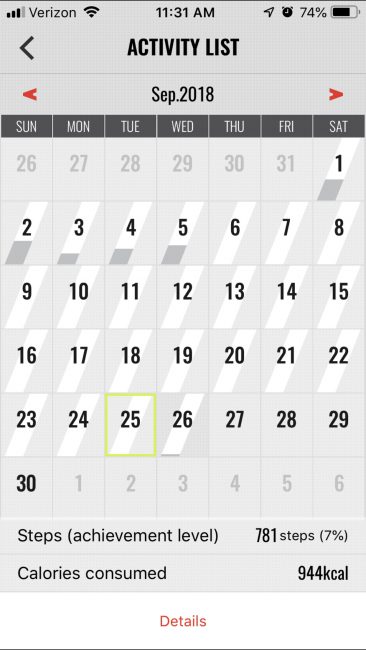 As a fitness tracker, it’s a slightly mixed bag. It tracks steps fairly accurately; the daily numbers seemed in-line with what I’ve gotten from other trackers, and I didn’t see too many “ghost steps” from driving or typing too quickly. The watch does its part quite well. The app is a little bit buggy though-I found that a few times it would sync, but the app would somehow end up 50-100 steps behind the watch. It also has a weird bug where it seems to shift time back a day. If I look at the calendar on the app, it assigns all my steps to the day before, never the day of, so everything is off by a day. This was especially noticeable when I traveled, because the app does make note of your position on a map (kind of like a very passive form of GPS tracking since it’s only visible after you sync), and it picked up a drive I did on a Monday as having been done on Sunday. No matter how often I sync, I can’t seem to get the date to line up with the app, and it’s very strange. That’s the only major bug though. Syncing is quick, and the app guesstimates calorie burn about as accurately as you’d want or expect for a fitness tracker —it’s inline with what any online calculator would spit back, so no weird calorie calculations like we’ve seen from other fitness trackers in the past. Unfortunately, it does not sync to MyFitnessPal, Apple Health, or any other 3rd parties.

Whether or not the G-Shock GBA-800 is right for you depends on what you’re seeking in a watch. If you want full-blown fitness-first features, this isn’t the watch for you. If you want a modern G-Shock watch that offers some fitness, an easy way to program it, and looks and feels amazing on your wrist, this is a perfect fit. At $100, it’s on the high-end for a digital watch but low-end for a fitness tracker, and for the price and features I think on the balance it’s a great deal. Just don’t rely too heavily on the app to sync your steps and dates correctly!

What I Liked: Incredibly comfortable; comes in multiple colors; distinctly a Casio watch; lots of digital features; easy to program the watch from the app; step tracking itself is quite accurate; alarm is loud

What Needs Improvement: Date bug in the app makes it tough to look back at past activities 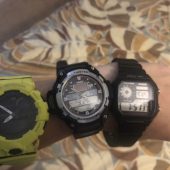 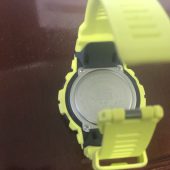 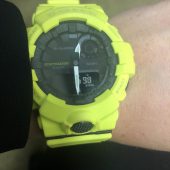 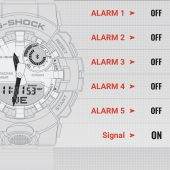 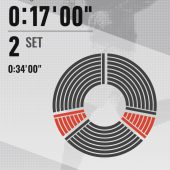 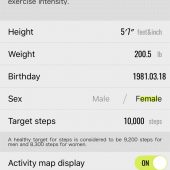 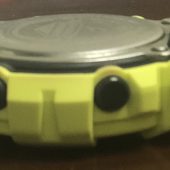 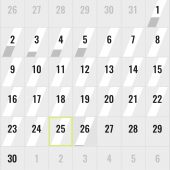 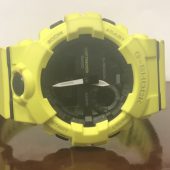